My Most Trivial Pursuit 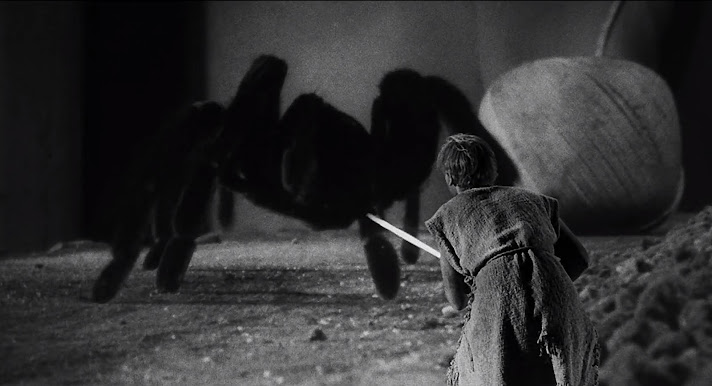 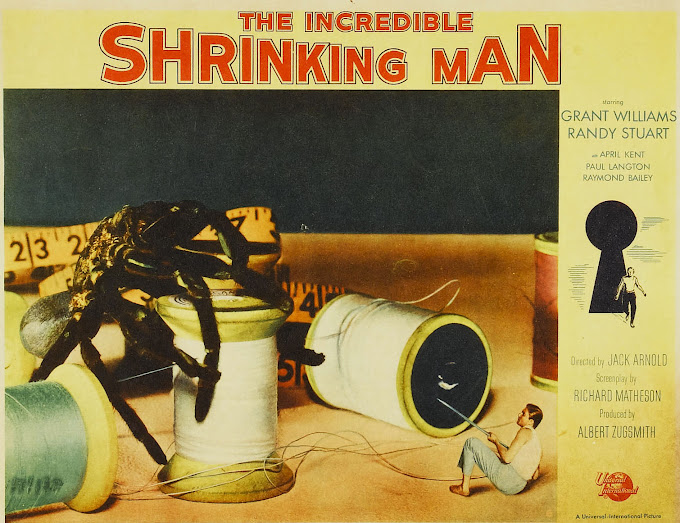 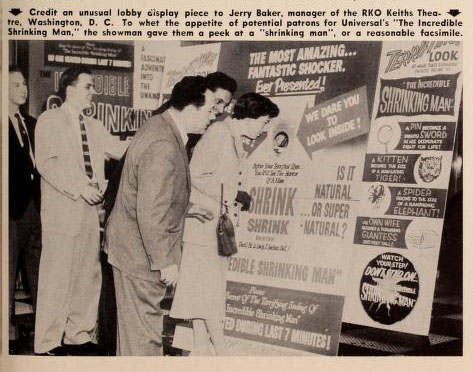 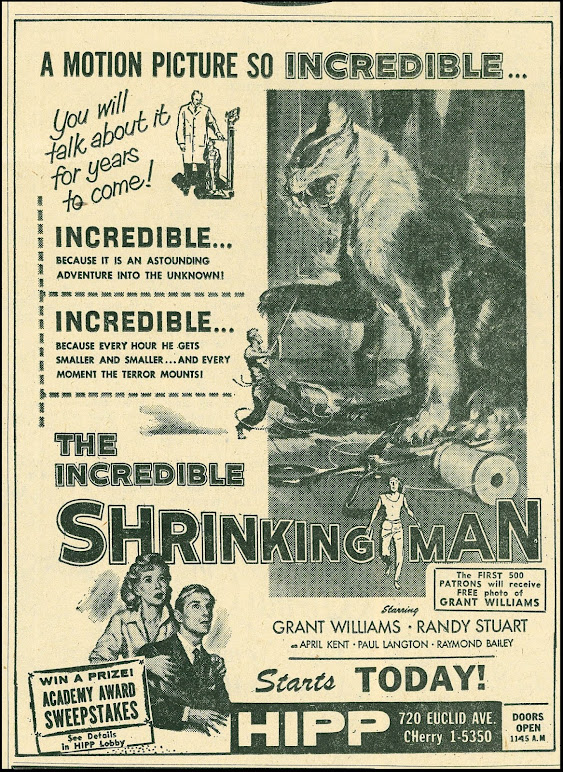 Movie moments that linger a lifetime can swell up with memory so that what you thought you saw goes way past what was actually there. Remember fourth grade classmate Tony Gentry who told me a lion in Black Zoo bit a man’s head off on camera, or the Lowe boys next door who swore Natalie Wood danced stark naked in Gypsy? Maybe they were joshing, but as likely these boys trusted their recall, plus what active imaginations implanted, because that’s how powerful a film impression can be. They saw back on a sensation the way they wanted to, and isn’t that how fond memory works across the board, not just from movies but all of life? Gloried experience is enhanced each time we glory in it, reality having parted and gone its useless way. Cue then The Incredible Shrinking Man, which I knew first on a Liberty combo with Jack the Giant Killer in July 1964. This may have been where movie madness was truly baked in, nothing to take priority over screens again. Especially chiller or fantastic stuff. I babbled over Shrinking Man in 2006, focus in part on a contest between Scott Carey (Grant Williams) and a tarantula, from which but one could walk away. Dollops of blood were spilled, or were they? I said emphatic yes to pint-size peers who would listen, and believed myself it was so. The Incredible Shrinking Man from 1957 being back for but one day in 1964 was cushion against my being doubted, so recount could get as gory as I chose. 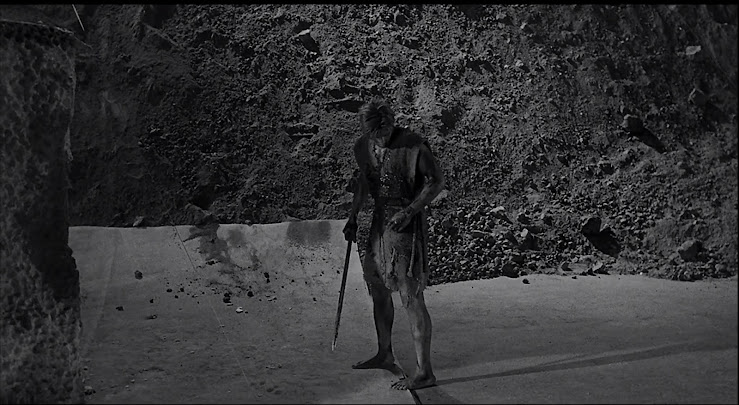 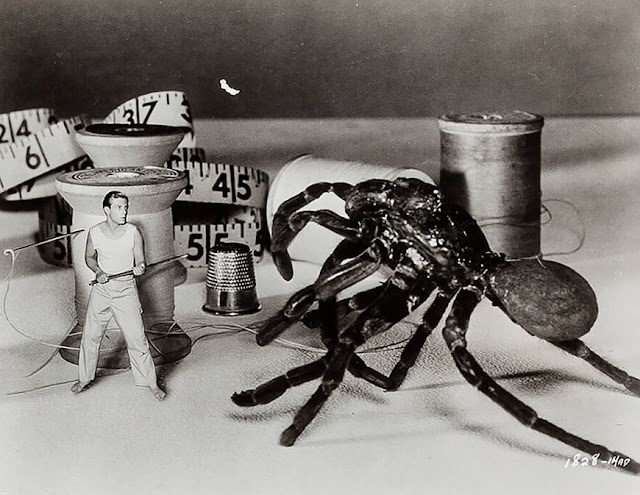 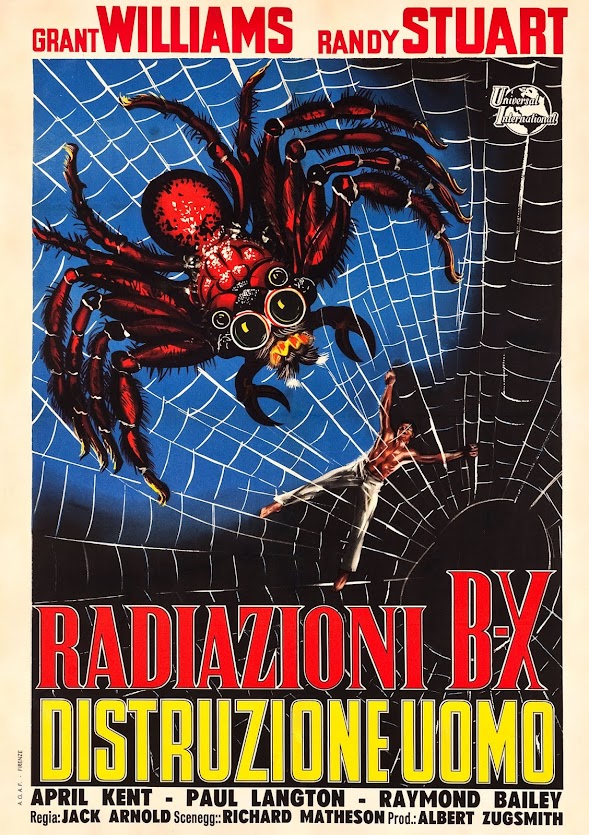 Still, one must come to terms with truth. Do I want to die deluded as to spillage Scott drew from the belly of the beast? Readers responded to the ’06 reflection, several specific as to what they saw in 1957 or after. Was there a way to determine if The Incredible Shrinking Man was trimmed at some point? An obvious freeze-frame occurs at the moment of tarantula truth that was not there before, this a Shrinking Man status since home video first made it available. Fans have noted the anomaly, some inquiring to Universal, but getting no response. Question to burn within me was how much? --- as in footage removed. Findings indicate mere frames, three in fact as I calculate it. Am I nuts for caring? Why don’t I just rake leaves, or help out at the animal shelter? Long as we’re here however, might as well detail the Shrinking saga as lately lived, with valued and considerable input from lifelong collector/historian Todd Feiertag, with whom the topic came up quite by chance during e-mail ping pong regarding a couple of Harold Lloyd lobby cards. Todd and I are acquainted since halcyon days of paper pursuit and shows attendant. He has been in the game for 57 years, a record setter on several occasions for price realized on posters. Turns out he also has film, as in 35mm, as in two35mm prints of The Incredible Shrinking Man, both generated in 1956 for early 1957 release. Todd volunteered to examine the relevant reel and determine what might be presently missing from the spider scrap, tarantula tilt, however we choose to designate it. 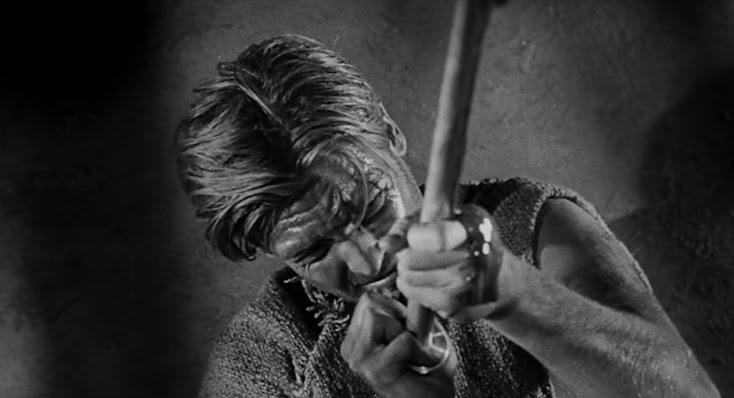 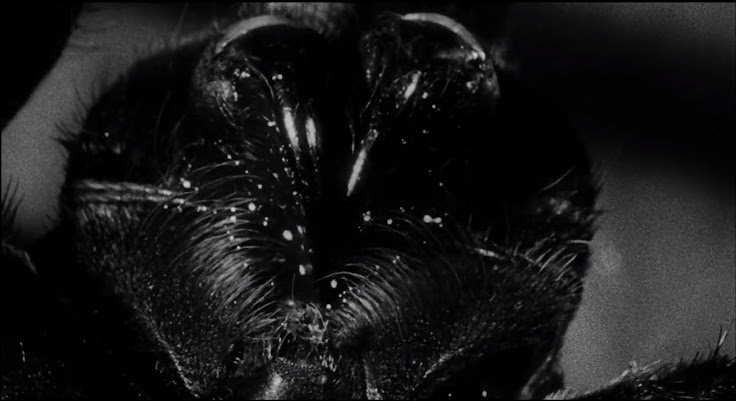 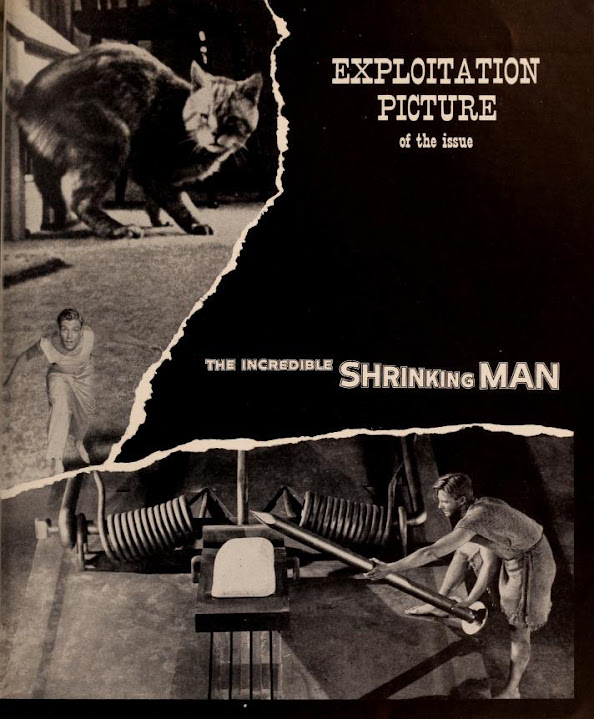 Re the Shrinking Man reissue in 1964 that I saw, could new prints have been generated at that time? Todd thought not. He suspects those still usable from 1957 were put back in service. I wondered how the Liberty could ’64-score not only The Incredible Shrinking Man, but Tarantula, The Deadly Mantis, and The Mole People, all of which I saw within a month’s enclosure. Trades from the period reference a company called Ultra Film Distributors, Inc., which was set up by Budd Rogers, a longtime Universal employee, who by the early 60's was an independent distributor. His partner was Sherman Krellberg, who had handled, among many properties, a brought-back White Zombie during the 40's and 50's. The partners formed Ultra in 1962, and sub-licensed from Universal a number of titles, ones I saw, as well as This Island Earth, Monster On The Campus, others. Ultra also handled exploitable imports Two Nights With Cleopatra, Fatal Desire, Rice Girl, etc. Don’t know how long it was before Ultra folded. The Incredible Shrinking Man made its way to television in 2-65. Prints for that purpose on 16mm were complete based on two I had over collector years. It was only with coming of home video that critical frames went missing. 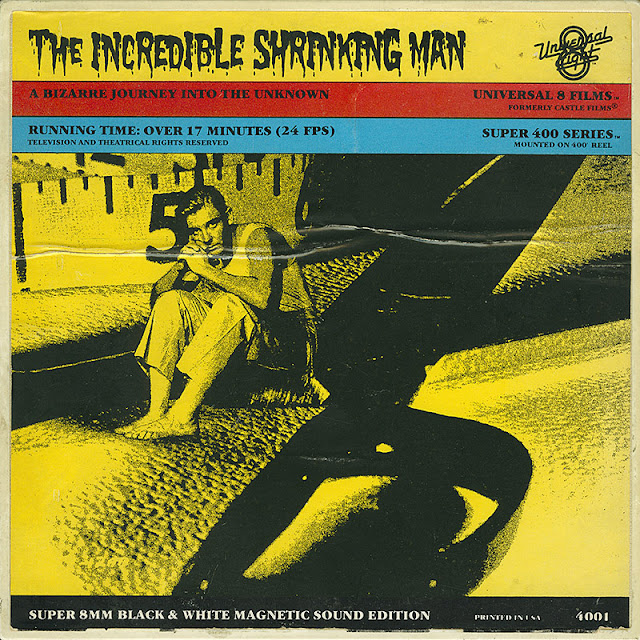 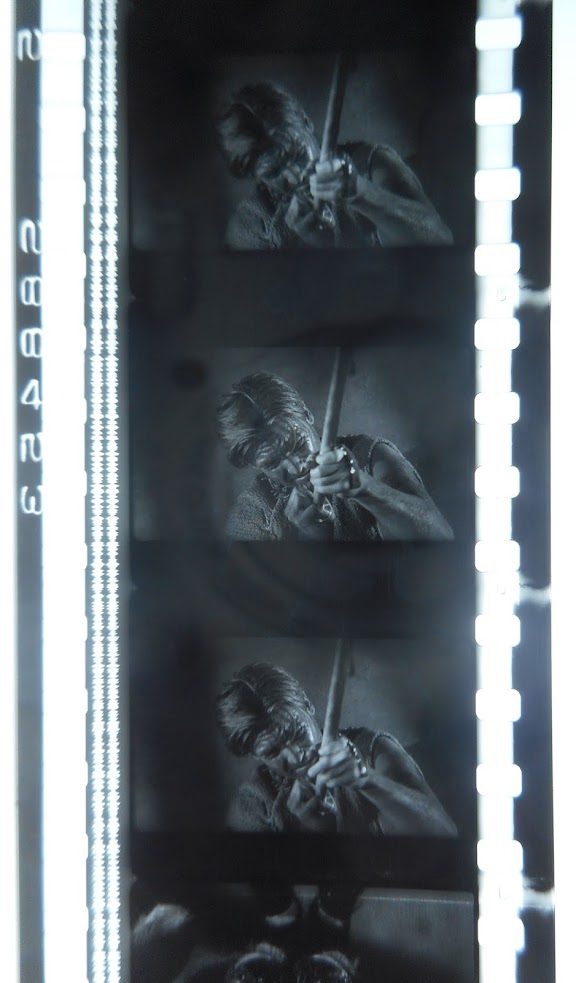 So how critical, really? And as to a mere three frames, so what?, being but the wink of an eye. Truth is, that’s a long wink. Any print where I had to clip off three frames to make a splice was walking wounded from there. I would dread the jump forever after, and feel my audience distract each time that reel unspooled. Digital has of course ridded us of such incubus. So why did Universal freeze action at its most decisive point? Todd Feiertag sent the capture at right of frames from his 1956 35mm print that are missing from circulating versions of The Incredible Shrinking Man. I examined these, compared them with what we presently have available, and it appears that Universal froze just prior to Scott’s gesture in turning the nail he thrusts into the spider, in effect screwing it in further to assure the kill. Maybe for home video purposes, Universal felt the moment was too explicit. A pity, for here was a kicker to weld action deep in our heads. So far as I can determine, a last time we got it intact was when “Universal 8” (as in 8mm) issued a seventeen-minute abridgement of The Incredible Shrinking Man for home collectors. This was during the seventies. After that, the footage went truant. Universal has not so far released The Incredible Shrinking Man on Blu-Ray, although there have been Region Two discs. I understand from buyers that these are also incomplete re the spider scene. Kino, Shout, Scream, or whoever, could license The Incredible Shrinking Man from Universal, put the missing frames back in, and promote a “first time in forty plus years” complete version. We'd then know finally and for sure what we really saw through a child mind’s eye back when The Incredible Shrinking Man had its most vivid impact.

Many Thanks to Todd Feiertag for making this column possible.

My Most Trivial Pursuit