A Few That Became Hard Sits 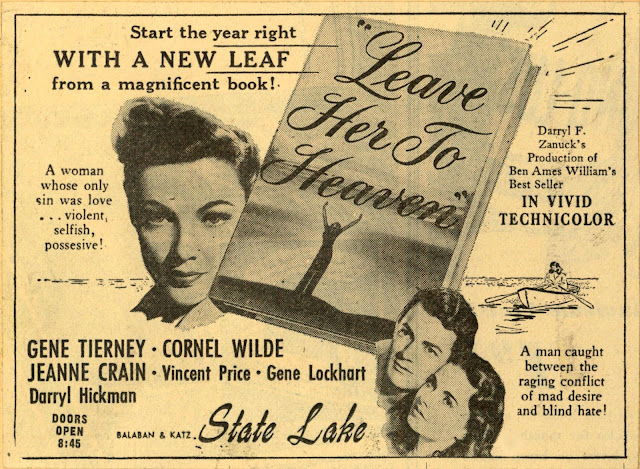 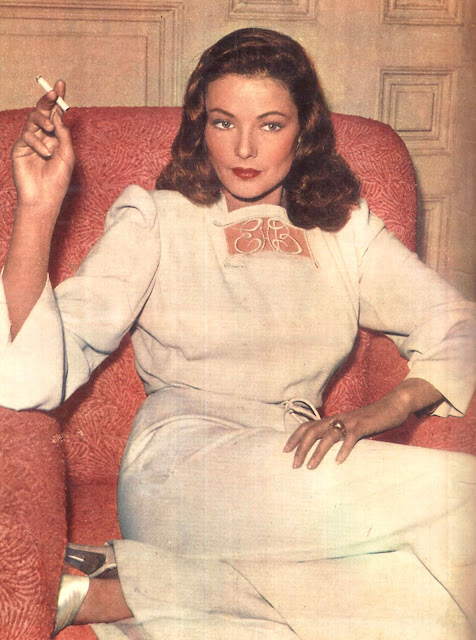 Started to watch Leave Her To Heaven last week, and quit after forty minutes. I went in with dread, knowing too well what an unpleasant show this is. Fox had an enormous hit in 1945 because Leave Her To Heaven did things no movie had so far dared. It was a sick sex story where at-peak Gene Tierney let a child drown and then plunged off stair steps to abort another one, hapless husband Cornel Wilde framed for murder in her wake. All of ordeal is bathed in Technicolor and lovely settings we could hope to live in, but not under such disagreeable circumstance as laid forth here. Leave Her To Heaven shocked viewers in similar way to The Miracle Of Morgan's Creek --- both seemed to flaunt proprieties that censorship then-enforced, and both profited richly from the affront. I suspect Leave Her To Heaven got at a lot of people where they lived, being vivid remind that a crazy person can do much damage, but a beautiful crazy person can leave many times the wreckage because besotted partners will always give her another chance. A Gene Tierney, even with all screws loose, never runs out of Cornel Wildes to misguide, men being the eager victims they are. For all of warning bells women got from movies where one allies with a scoundrel or wife killer, Leave Her To Heaven gave dire as warning to unwary men subject to snare by dangerous females. Difference is men being so much more helpless in these situations. Maybe Heaven as frightful object lesson is what scares me off it. 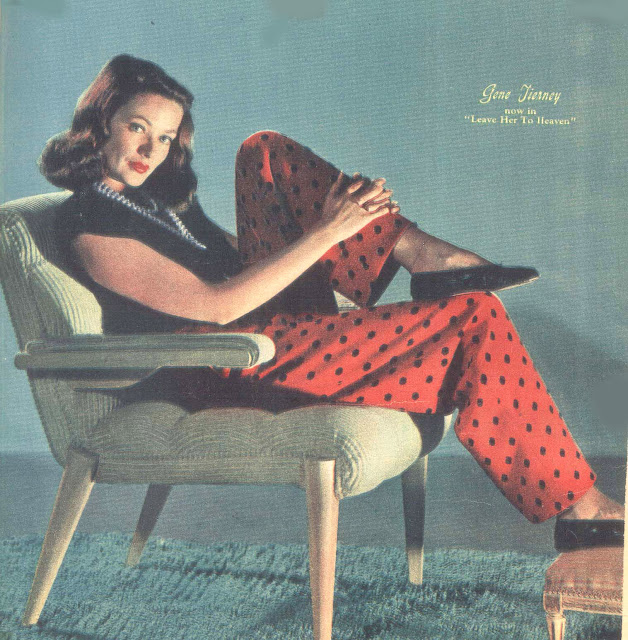 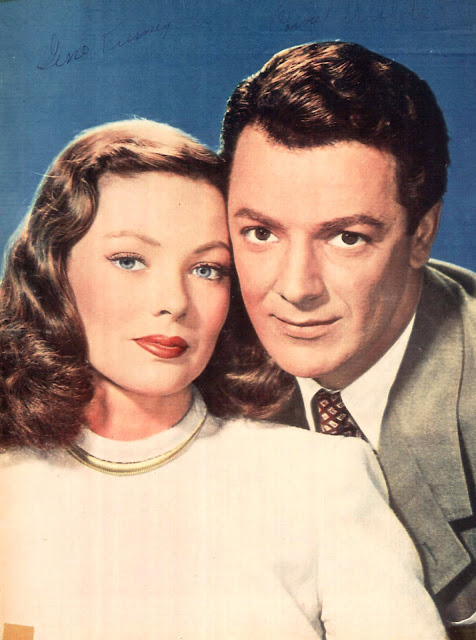 Leave Her To Heaven was a big gorilla of 16mm collectibles, an IB Technicolor print the all-time "get" as it seemed a loveliest showcase of gone forever dye-transfer. saw a few nitrate revivals during the 70's to which knowing cineastes lined up, them knowing this was movie equivalent of the Tut exhibit. Technicolor was then a faith spread by collectors like crusaders of old. IB Tech on nitrate has come back to vogue at TCM festivals and weekends staged annually by the George Eastman House. When prints are intact and projection right, they can take breath away. Some old formats doremain better, but most that are gone, are gone for good reason. Gulp of the real for me was A-B comparison, for a roomful of objective watchers, between DVD's of Vertigo, The Searchers, and The Adventures Of Robin Hood, with 16mm IB Tech of the same titles. This was at dawn of new millennium when I suspected it was time to quit celluloid. Everyone, including myself, had to admit the digital looked better. No longer could I be purist and guardian of prints the superior to video successors. The biggest thing film hoarding had to give up was aesthetic dominance over those who did not, for any number of sensible reasons, hoard film. Now we're all of us stuck in a same bog of too many DVD's and not enough space for them, so hoarding at least maintains. 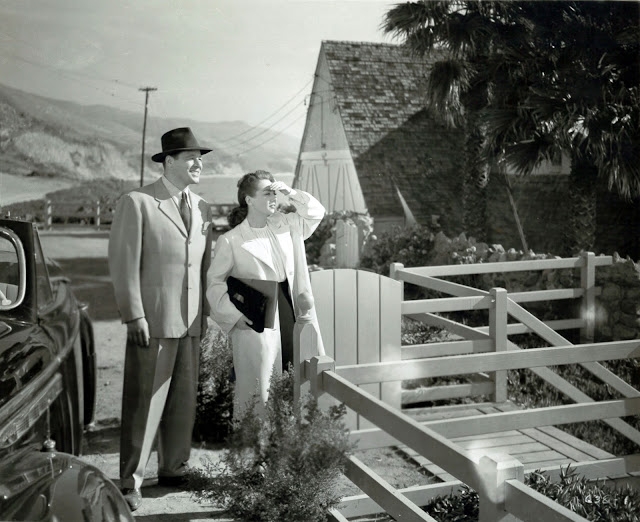 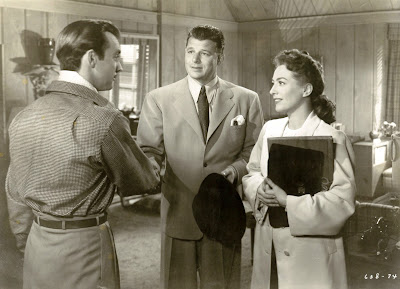 Mildred Pierce was yesterday's pick, again with trepidation. This one is many dynamic things, but nasty and cruel in particulars. I found myself clinging this time to Steiner's music, the Curtiz directorial swoop, and Jack Carson. Agree too with consensus of viewers, Veda is a dreadful child and worse adult. Her abusing Mildred, over and over, pains me to point where, if in WB or Curtiz mood, I'll opt even for Passage To Marseille over Mildred Pierce. What drew me was word that Criterion had improved on the HD transfer Warner leased them, and yes, shadows are blackened and smoke floats on an almost third dimension. Through this all, there was still Veda. I read that Ann Sheridan turned down Mildred Pierce in part because "the kid was a horror." Many tested for the Veda part. Shirley Temple wanted it badly, and effective as Ann Blyth would ultimately be, I'd like to have seen what Shirley, who was seriously considered, might have done with it. What a shock that reverse in persona would have been. Mildred Pierce is pitiless for giving no relief to the title character's ordeal, Jack Carson as Wally Fay a lifeline for me and humorous escort through an otherwise harsh ride. Then too there is Eve Arden, so thank Heaven for both. Leave Her To Heaven, on the other hand, had no one among cast/characters to leaven blows (and it's not that I demand "comedy relief" in all films, but wit is appreciated, and always there in the best of them). Curtiz and producer Jerry Wald likely saw Carson and Arden as very necessary antidote to Mildred/Crawford's suffering. Question just occurs: Is Crawford harder to take for some because she's always so serious? I'm satisfied would have brought balm even to intense characterization that was Mildred. She was certainly lighter in interviews and performance otherwise. Did Crawford lack any sense of humor, about herself or work she did? That's not a rhetorical question, but honest inquiry. Maybe it's age that has made my skin thinner to buffeting from ordeal movies. 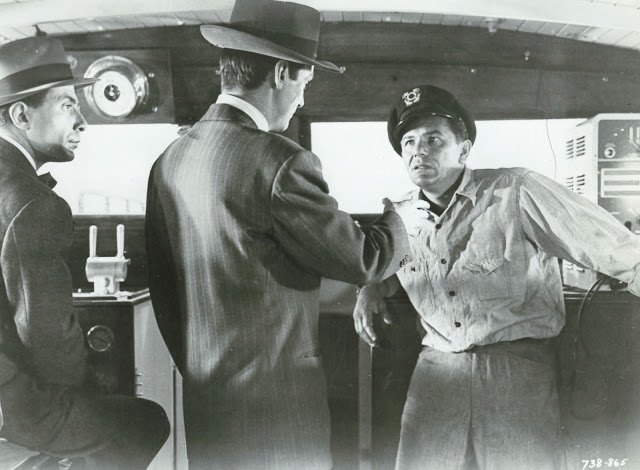 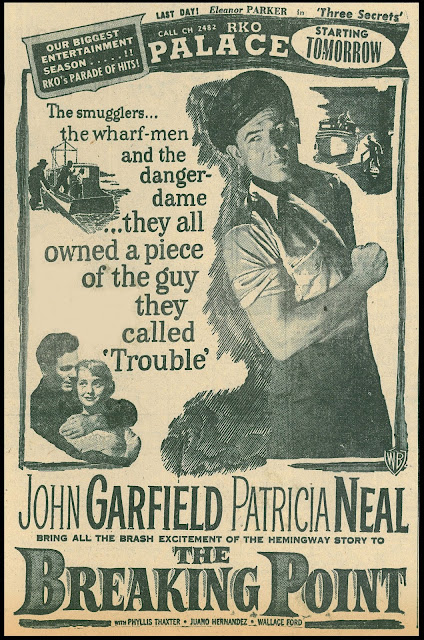 Another that bummed me was The Breaking Point, also from Curtiz out of Warners. Much as I like John Garfield, for me he's an eight-ball actor, as in always behind it. There are ever-more pianos lowering over his head, only question being when the rope will snap. What was it about 's persona that invited disaster, or guaranteed wrong moves? He was, in that sense, noir's comfiest fit, but never found an out from aces and eights life dealt. This applied too in his offscreen life. From what I've read, Garfield was a running man just ahead of disaster when his congenitally bum ticker took him premature from what had become a too-real veil of tears. I'm figuring the end would have come, HUAC or no. Like Lou Costello, Jean Harlow, Steve McQueen, he was doomed from early on. That, of course, gives all Garfield's work a resonance, but was being such a born loser in films as weighing on him as for the audience watching? Trouble with The Breaking Point for me is the knowing that Harry Morgan's judgment will be as relentlessly bad as circumstances he's continually in. What lacked that a Robert Mitchum had was detach from screen surroundings, an actor's distance if not a character's. Maybe in the end was too invested for his own good. Mitchum's Jeff Markham came to a worse impasse in Out Of The Past, but coolly observant Mitch is separate enough from the process to reconcile us with it. I could almost feel them sawing off Garfield's arm in aftermath of The Breaking Point's end title, that either a testament to intensity of his acting or my own shrink from shows that lay truth too bare. Result: The Breaking Point sits long on a shelf between views, while an Out Of The Past comes out regular as season's change.

A Few That Became Hard Sits