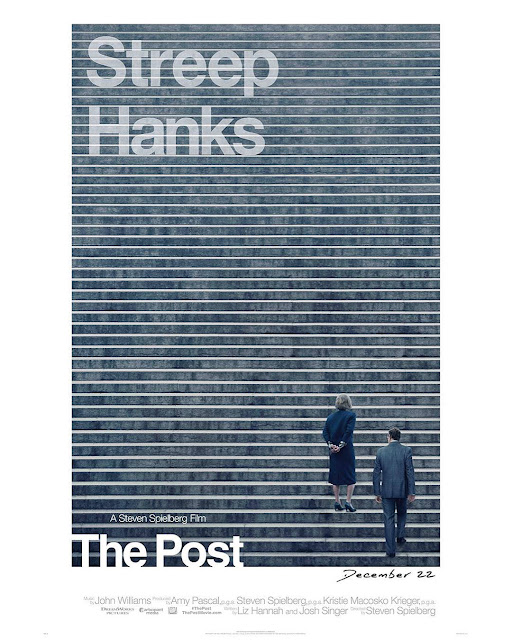 Katharine Graham is the first female publisher of a major American newspaper -- The Washington Post. With help from editor Ben Bradlee, Graham races to catch up with The New York Times to expose a massive cover-up of government secrets that spans three decades and four presidents. Together, they must overcome their differences as they risk their careers -- and very freedom -- to help bring long-buried truths to light.

Genres: Biography, Drama, History
Review:
The Post is a highly polished, well acted prestige Film from Steven Spielberg that couldn’t feel timelier if it tired.  The film is set the in 70s but it hard not to see modern day parallels throughout.  Spielberg tries his best to keep the film self contained but its hard not to see it as a message movie.  In the hands of a lesser talent the film would have come off as more overtly preachy.  The top tier cast helps that by putting on some stellar performances.  Meryl Streep and Tom Hanks are front and center for most of the film and each turns in impressive but varied performances.  Streep turn as Katharine Graham is a study in subtleness and nuance as we watch her character find her place and ultimately her resolve to lead.  Tom Hanks is a rougher around the edges but still likable and relatable even though he and Streep play fairly Waspy characters.  The supporting characters are all played by top level character actors, like Bob Odenkirk, Carrie Coon and Bradley Whitford, and they give the film a strong steady feel throughout.  While the film has all the right ingredients there’s just something about it that keeps the audience at arms length that keeps it from being a classic.  The Post is still strong enough to make for a perfect companion All The President’s Men.