This film represents a perfect example of mainstream film that leverages pigeons for multiple purposes (creating perturbing or pitiful feelings in the spectator) . The first pigeon appearance is in the main credits. Here, pigeons are shown in grey scale, recorded with low resolution by surveillance cameras. Here pigeons are shown as mysterious and slightly hideous creatures. In this scene we can see a close up of a pigeon and several shots of pigeons in parks (the reason the security cameras are recording pigeons is uncertain, maybe they were calibrated by a pigeon fancier).

What is more clear is the reason for introducing pigeons in this point of the film: they were used to represent Hannibal Lecter. In the scene, a large flock of pigeons gathers and creats Hannibal's face. This image lasts for a very short time. It is both disturbing and quite an achievement to find a mixture of pigeons, pixel-art and cannibalism-exaltation in a single shot.

According to Wikipedia:  The tile sequence remained on Scott's mind and would eventually end up as the main title sequence. Livesey would gather footage of pigeons in an empty square in Florence early one morning which, in the final cut, would morph into the face of Hannibal Lecter. Scott believed it a good idea, as it fundamentally asked the question: 'Where is Hannibal Lecter?' Scott explains: "And of course this story tells it, with pigeons in the cobblestones of somewhere, where you wonder where that is ... and there he is... his face appears.". The titles are said to have been influenced by the film Seven.

Later, in the film, Hannibal tells a perturbing story about roller pigeons (pigeons with the ability to roll in the air) to justify how behavior can be controlled by genes. He mentions that there are two classes of roller pigeons, deep rollers and shallow rollers.  When two deep rollers are bred together, their offspring will roll to the ground and kill themselves. The scene that includes this conversation can be seen here. A curious story that is unclear whether true or false. 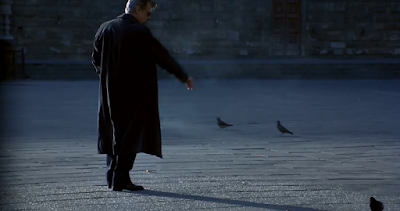 There is a counterpart to this scene related to one of the characters that rescues an injured pigeon from a road and tries to take care of it. This action clearly shows that he is a noble person. Although this is a secondary character, he provides a crucial hint to the research of the investigation into the case.

Details of the pigeon starring