Movie Review: No Matter your Point of View, ‘Snowden’ Gets your Attention 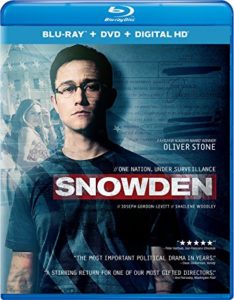 In American movies it’s pretty much the good guys versus the bad guys – the heroes manageable flaws not withstanding.  So when the drama takes into account real events you must watch it through that prism and when you add in Oliver Stone….

The Oscar winning director establishes Edward Snowden’s patriotic sentiments and unending desire to serve his country from the outset.  In basic airborne training, Joseph Gordon-Levitt as Snowden hides stress fractures from his superiors until his leg finally gives out and ends his military career.  “If you ever land on your feet again, airborne or not, your bones are pulverized,” the army doctor informs him and reassures that there are plenty of ways to serve his country.

This leaves Snowden the CIA where he’s told that brains – or the lack thereof – serve as the front lines and the stakes are not as cushy as the safety far off mouse clicks provide. “This means that if there is another September 11 – it’s your fault,” his senior instructor advises.

The baselines in place, Snowden’s credentials as a nerd are contained in keystrokes that provide his only avenue to meet a girl.  Success via geekmate.com lands him Laura (Melissa Leo) and puts a little dissent into his blind pursuit of protecting America.  “I’m not against the soldiers, I’m against the idiot who sent them there,” she knows all the talking points.

But the voice in his ear isn’t nearly as strong as seeing the actual government in action.  Questionable use of the fourth amendment, military industrial waste in the CIA, and the NSA lying directly to congress all weaken the resolve in Snowden’s belief system

CIA shenanigans that don’t take into account the toll on innocent bystanders doesn’t help either. So whether the viewer is openly amenable to distrusting the government  or just moderately engaged like most Americans, the erosion breaches the fourth wall.  Otherwise, that damn Oliver Stone is once again bending history to the way he wants you see it.

Nonetheless, Obama does not come to the rescue, and Snowden can’t help but see his relationship turn into a love triangle. The loss of innocence acting as the third wheel.

As the world comes down around him, and the impetus to act overwhelms, the drama is effectively weaved around disclosure to The Guardian and Glenn Greenwald.  The final straw being the meta-data collection of everyone, and you’re swept up in “why are we mad at this patriot sacrificing everything to keep us all off the national security grid.”

Fred Kaplan of slate.com isn’t so kind in his estimation and vehemently derides the fact that the film does not “dabble in the slightest ambiguities about his hero’s nobility or the intelligence agencies’ evil.”

Given the wide array of discourse that a Google search yields, the point is well taken.

On the other hand, even though the film doesn’t quite grab you in swirls of intrigue like JFK, it gets your attention.  That hopefully lays the groundwork to evoke enough patriotism for people to get a more nuanced overview and become engaged in an issue that obviously isn’t going away.  I know it did for me and that makes Snowden worthy of a look – especially if you think that someone is looking back.

SNOWDEN is available in the UK on Sky and iTunes from 31st March and on DVD / Blu-Ray from 3rd April 2017 via Sony Pictures Home Entertainment/Vertigo Releasing.

Movie Review: No Matter your Point of View, ‘Snowden’ Gets your Attention Reviewed byRich Monetti on March 17. Oliver Stone certainly forwards his agenda with Snowden but still gives you plenty to think about and engage in Rating: 4.15

The post Movie Review: No Matter your Point of View, ‘Snowden’ Gets your Attention appeared first on Movie Buzzers.

Movie Review: No Matter your Point of View, ‘Snowden’ Gets your Attention