On Twin Peaks: The Return, and the Present Delerium

Note: Spoilers below for Twin Peaks: The Return, Parts 1-11.


1989 comes to a small northwestern town, just as it comes to every other place. This town, sheltered by the rains and forests of Washington State, is called Twin Peaks.

And in 1989, Twin Peaks becomes a place so unlike every other place, it's almost insulting to describe it with the same language, channeled through the same air. 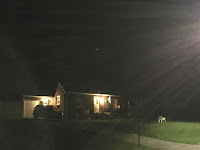 Something will find Twin Peaks and linger there: an entity from outside space and time, incorporated in a human body, but endless and depthless when you look into its eyes... a creature of the abyss, feeding on suffering, whose emptiness infects the weak and compromised. This thing is called BOB.

Fortunately, this universe has its defenses. A coalition of reason and resistance will emerge -- a wise and perceptive FBI agent named Dale Cooper, a stern and earnest local sheriff named Harry Truman, and a cast of supporting personnel who will make their jobs possible. This coalition will both win and lose... it will vanquish a tormentor, save a life, and face down the darkness... but Cooper will be drawn into an existential prison, locked away, while BOB is let loose upon the world.

This story will start with a single unsolved murder, and it won't end for 25 years.

In a hotel that appears mysteriously empty, except for the small lobby where we linger, there's a meager crowd huddled together and looking expectantly at an empty stage. Suddenly, a chorus of music blares, and a figure descends on a long escalator from nowhere. He stands in front of this audience, hand-picked to receive him, and he tells them something small and strange that will end up changing the lives of everybody in the world.

This creature is a funny little monster, a sort of orange wax figure, always scowling, with hair that looks like the chaff from a bad harvest. It's truly a Thing.

There's a lot of mockery of this spectacle... disembodied laughter, a slow-reacting universe that sees nothing but an empty absurdity... but when everything becomes clear, months and years later, we'll remember that laughter as a terrible portent.

In that small northwestern town, where those terrible things happened twenty-five years ago, a girl meets with her boyfriend outside the Double R Diner. He is afflicted... everyone is afflicted... and in his case, it shows as bad skin, a twitchy demeanor, and sunken eyes.

The girl ends a tense conversation by giving him a wad of money, and he promises her the world. He is moving in the right direction, he says. He will be everything he's been promising. In the meantime, do a line and lean back while I drive you into the wind.

It takes a certain kind of person to do this -- to convince themselves, and those who trust them, that they own the world. If they're really that kind of person, they can give you the glow of a good high, even as they grind your life into dust.

On November 8, 2016, the strange Thing from the top of the escalator becomes the Thing-in-Chief. Garmonbozia Futures shoot up on the commodities market.

Dale Cooper returns to the world, but he loses something in the process: his shoes, of course, but also his sovereignty, his gifts of wisdom and cunning and personality. He is essentially reduced to a toddler, well-meaning, but diminished, adrift in everyday life. Nobody really seems to care, because they have no sense of his real value... to them, he is just a placeholder, like every other secondary character in their lives.

Sheriff Harry Truman is suffering from an unnamed medical condition, and his loved ones can only hope he will recover. Twin Peaks, 25 years later, has to function without him. The silence of his absence is deafening.

Where are the heroes, the protectors, the avatars of hope and compassion? Where have they been, while Bob has been ranging across the American dreamscape?

The Thing-in-Chief is constantly photographed. This is a world where every reality is measured in photographs, after all, and this Thing has changed everything. History will always have his mark gouged across the second decade of the 21st century, and there will be plenty of visual records to prove it. 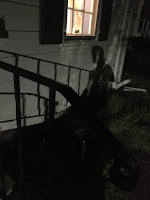 In this particular clip, he is on the tarmac, walking in close proximity to his wife, a loyal beauty who's been reduced to an ornament... whether this flatness is his work, or whether it's somehow self-imposed, is presently unanswerable.

The distinguishing thing, though... the little touch that sets this moment off... is that he reaches for her hand, looking for reassurance (a show for the cameras? Or an unexpected moment of insecurity?) and she bats him away. With gait unbroken and stone expression, she rejects him. How easily she makes such a large Thing look so small.

And the lens of the entire apparatus... every looping GIF, every gasp and joke and conspiracy theory, is turned toward that snub. Here, in a soup of irrationality, we catch a taste of meaning, and it turns out we're starving for it.

In 1941, "Trinity" -- predecessor of the nuclear bomb -- changes the geographic face of New Mexico, and the political landscape of the whole planet earth. This is the epicenter of the sins that will be visited upon these humans for the next century.

Within the blast radius, shadows flicker against gas station walls, and something parasitic is born.

Hands are an especially persistent motif in this visitor's mythology. The dissenting voices of the void call them "small," and this becomes a creeping trauma for the thing-in-chief. He sometimes uses them as weapons in social situations, yanking people toward himself and crowding them when he needs social leverage. His handshake is a landmine.

One of his strangest spectacles is a session in his office, sitting across from a fellow world leader while the buzzing eyes swarm around them. The expectation is simple -- a handshake, the oldest convention of courtesy in Western diplomacy -- and he refuses to carry it out, conspicuously ignoring the chancellor with whom he is supposed to be negotiating.

What is he afraid of, exactly? Her good will? Her leverage over him? Or his own hands, that suddenly seem so tiny?

And now we come to the primal scene, the moment where everything is distilled into its purest incomprehensibility.

At the Double-R Diner, there's tense conversation, followed by an unexpected burst of violence outside.

If you want the imaginary center of this sequence of events, pay attention to the conversation. Twin Peaks Deputy Bobby Briggs is talking to his daughter Becky and his former wife Shelly, and the family's tenderness is palpable. Even so, the strength of their connection can't efface the cruel undertone: Becky defending an abusive husband, continuing a pattern of abuse that her mother once propagated... and that her mother is making the same mistake again, even as she disapproves. The deep compassion of this family is barely enough to balance the cycle of violence that plagues her maternal line.

After the conversation is over, the violence comes, and here, you will find the emotional center, hand-in-hand with the imaginary center. Two gunshots break the windows of the Diner, and everyone ducks for cover. Deputy Briggs runs outside and finds a family stopped at an intersection, the mother screaming at her sulking husband for leaving a loaded gun in their car, and their child sulking in turn. So the father, so the son.

Behind the derailed minivan, there's a white sedan, and it can't stop honking, despite the obvious emergency that's holding up the line of traffic. Like a good town cop, Deputy Briggs goes to the window of the sedan to convince the driver to stop honking.

There, Briggs finds something harrowing, in its inexplicable way: a woman screaming about the delay, enraged that she won't make it home for dinner, while a young girl writhes in throes of agony beside her... apparently having a seizure and coughing up black bile.

There is something absolutely alien and poisonous about this narrative moment. What impulses the driver is acting out... why she's so hysterical over banalities, even as she accompanies a suffering family member with a horrific illness... the malevolence is thick and oily and palpable. There is a sense, here, that Deputy Briggs has stumbled into a nightmare. Luckily, a scene change arrives to wake us up, so we don't have to remain there with him.

More centers, more nodules where reality seems to have twisted around on itself:

On July 25, the Republicans in Congress (the Thing-in-Chief's sycophants) held a vote on to bring a bill to the Senate floor. This bill would dismantle the ACA, and radically reshape the US healthcare system. It would rip health insurance away from something like 15 million people, and it would increase premiums by something like 20% (contrary to its stated aim of making healthcare affordable for all) [CBO via Business Insider]. Their "Yes" votes were audible over the national public outcry against the bill, and over the advice of medical associations, state governors, and their own constituents. 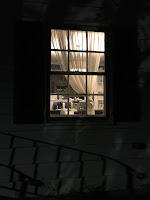 If you glance at this bill for more than a second, you see that it's actually illusory: no concrete policy is entailed, no strategy for solving the lingering problems with the healthcare system is implied. It's essentially a blank page, and the Republicans, led by Mitch McConnell and goaded by the Thing itself, are insisting on having a "constructive debate" on it.

At the heart of the process was a veteran soldier, famous for standing up against his party's worst impulses. braving the aftermath of major brain surgery... a mythical figure of politics, walking dramatically into the Senate chamber, and casting his vote: to conform without question to his party's nihilism, denying millions their health insurance when he himself had just undergone the trauma of a devastating medical condition.

He was applauded for his bravery, not just by his own party, but by the entire floor. And then the vote went through, and this bill -- a throbbing nuclear bomb for anyone with unstable employment and medical needs -- became an imminent possibility.

These are the children of reason's sleep. These are the scions of a chaotic, narcissistic, demented modern age.

It's 3 AM, and my town is very Lynchian tonight. The suburbs are deserted, with a hum in the background (a neighborhood of window air conditioners). Whenever I hear a car coming in the distance, it's always isolated, and I'm fully alone, and so I keep feeling a moment of panic. This is the dark road of the margins, and I am the bystander getting caught in the headlights.

Where are my protectors? Where are the people who have some grip on the world, who can still resist its tantrums and confusions and cruelties?

They are still sleeping, it seems, and I'm still left watching the television.

On Twin Peaks: The Return, and the Present Delerium