The first message when you play the Eraserhead Blu-ray from Criterion. 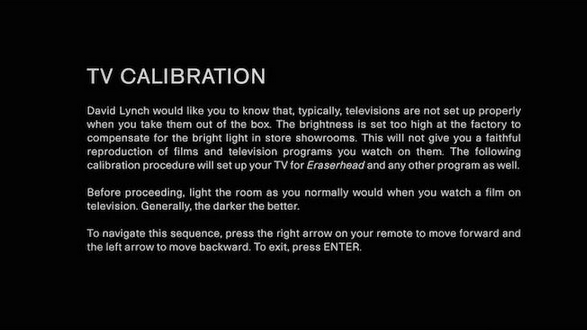 I couldn't sleep one evening and decided to pop in my Blu-ray of Eraserhead since it's, for me at least, the ultimate midnight movie. You can't watch Eraserhead middle of the afternoon, it just doesn't work that way. You have to watch it late at night and with as much isolation surrounding you as possible. This message surprisingly popped on the screen before the film began. I did as was told and closed every light in my apartment.

The film is all about atmosphere with Lynch's masterful calibration of sound and image colliding to create a toxic and surreal atmosphere that just sucks you in, even when you're not always entirely sure what is going on. Suffice to say, if you didn't "get" Erasherhead, you just haven't experience it the right way or in the right setting.

I can wholeheartedly confirm this theory to you based on personal experience. The first time I saw "Eraserhead" was in an afternoon film class, same thing with the following viewing. I didn't feel any of it. Nada. It left me shrugging in indifference, but upon third viewing, in the right time and setting, everything just clicked. This has been billed for year as a "cult" midnight movie for a reason. It has been created for you to watch it in the wee-wee hours of the evening and revel in its atmospheric absurdities. You gotta love Lynch.

The first message when you play the Eraserhead Blu-ray from Criterion.