Halloween costume inspiration from cinema and TV from years past...

Sometimes people ask me "Does anyone really use those movie costumes to help make their Halloween outfits?" and after witnessing years of evidence, I can safely say, "Yes". Ever since I've been publishing this costumes and props blog (around twelve years now), costumers, cosplayers and everyday enthusiasts have been in touch asking for high res detail shots to get a closer look at stitching, buttons, embroidery, or some other element of the screen-worn garments that it's been my pleasure to capture at cinema, convention and museum exhibits. So here's some more Halloween costume inspiration from years past and proof from West Hollywood's annual Halloween Carnaval that people are more than willing to give their looks their all when it comes to recreating looks from the big and small screen. 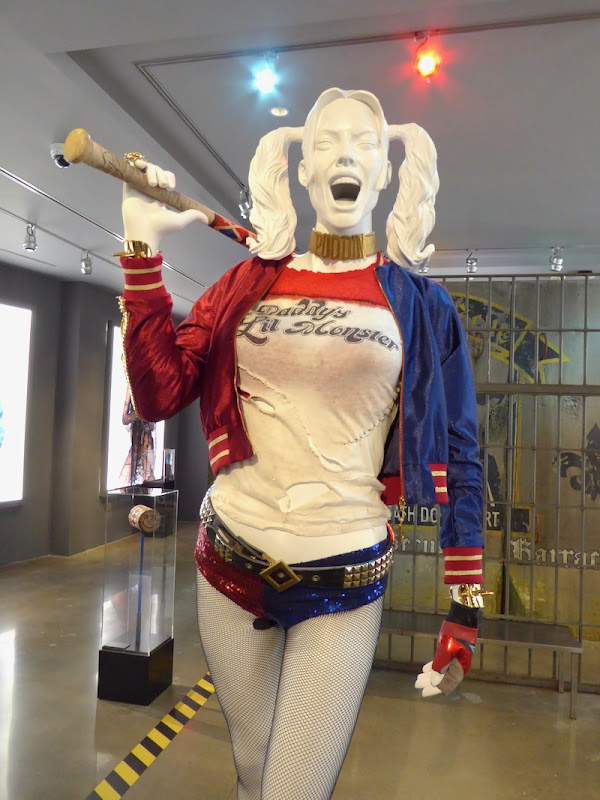 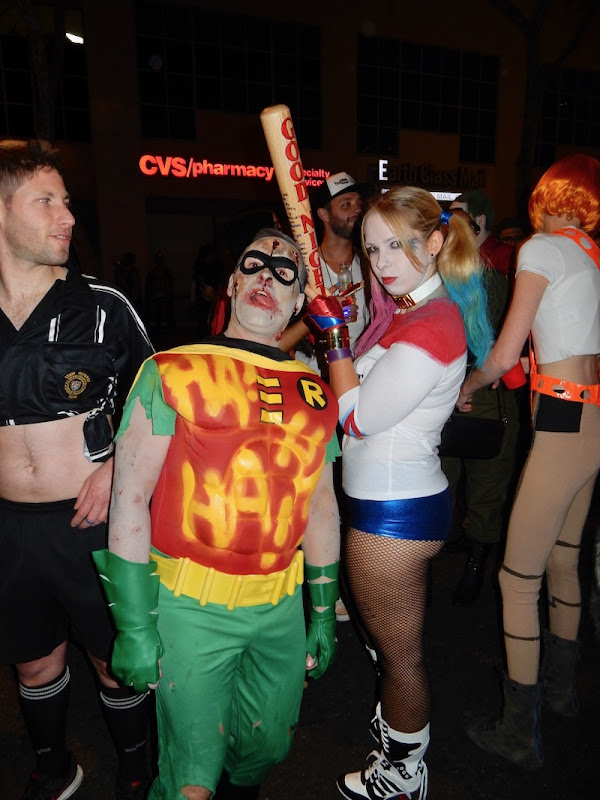 And here's someone channeling the anarchic DC Comics character at West Hollywood's 2016 festivities.
Pennywise costume from IT 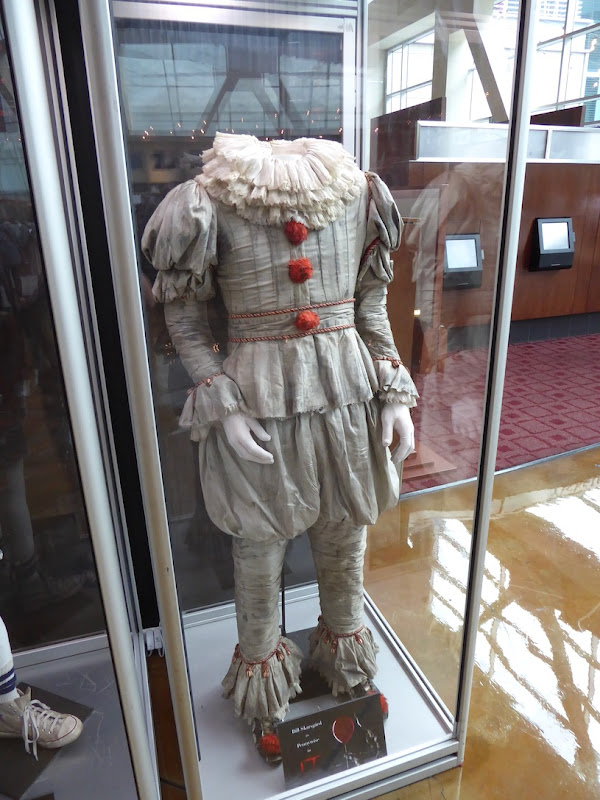 Bill Skarsgård wore this vintage style clown costume as 'Pennywise' in the 2017 cinematic remake of Stephen King's IT. 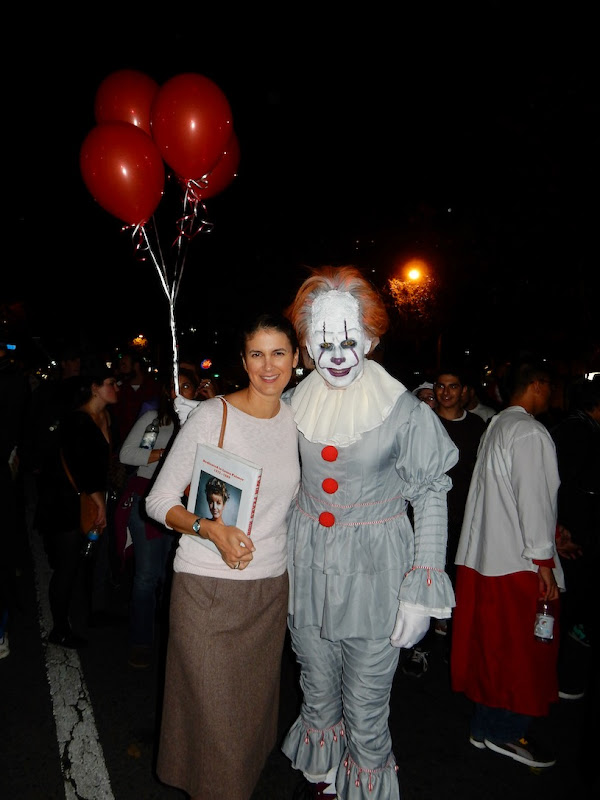 Janie Bryant was Costume Designer on the supernatural horror film, the costume was exhibited at ArcLight Hollywood cinema, and as you can see his deadly doppelgänger was handing out red balloons to Halloween party goers in October 2017.
Belle and the Beast costumes
from Disney's Beauty and the Beast 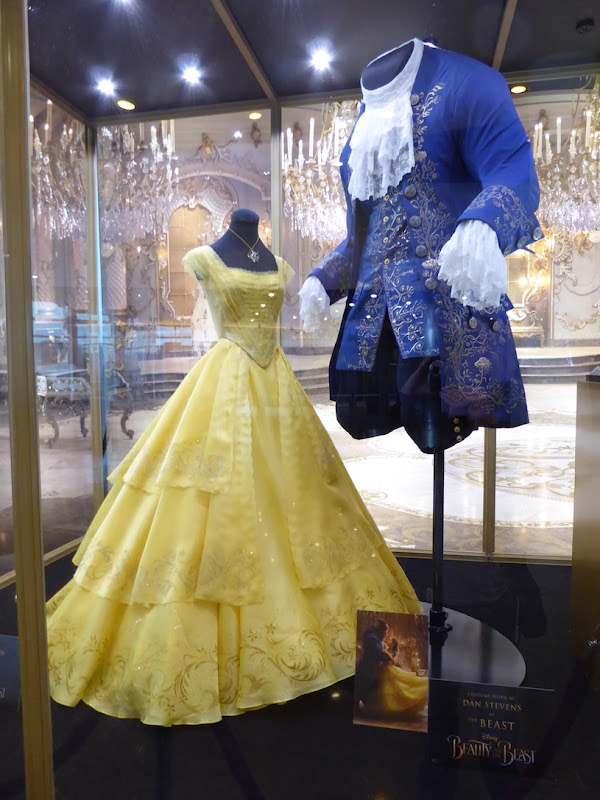 Disney's beloved Beauty and the Beast was adapted as a live-action $1.264 box office smash in 2017 with the help of Emma Watson and Dan Stevens in the titular roles (with costumes designed by Jacqueline Durrant and displayed at ArcLight Sherman Oaks). 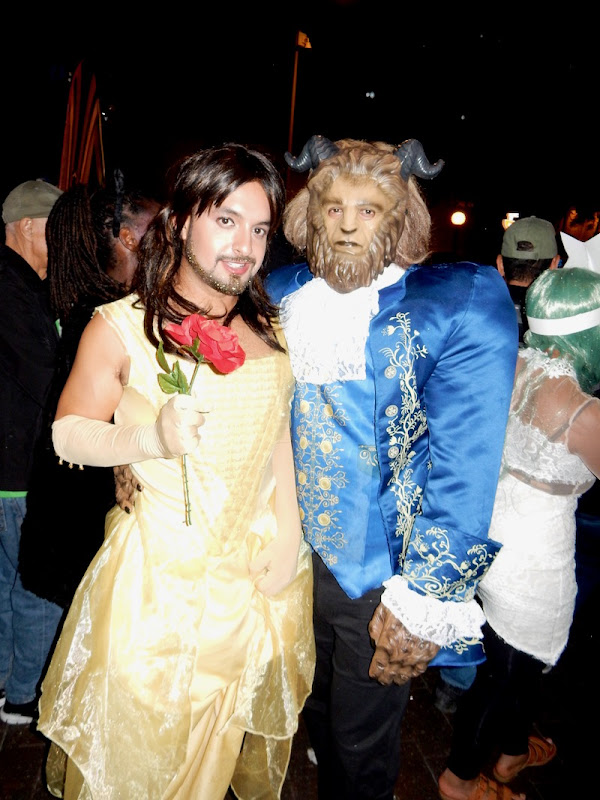 As you can see their tale as old as time was inspiration for some and a great couple costume at West Hollywood's 2017 festivities.
Mad Hatter costume from Alice in Wonderland 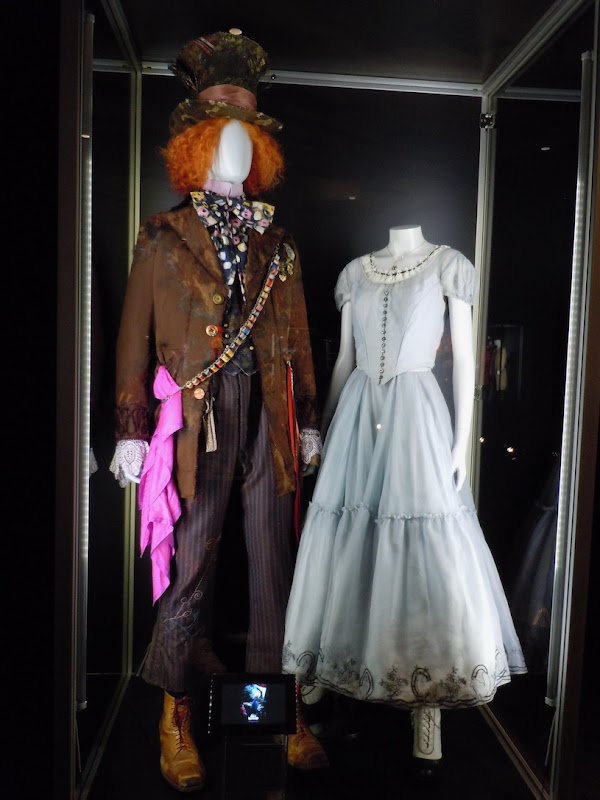 Back in 2010, Tim Burton brought Alice in Wonderland to life for Disney with the help of Johnny Depp as the eccentric 'Mad Hatter'. 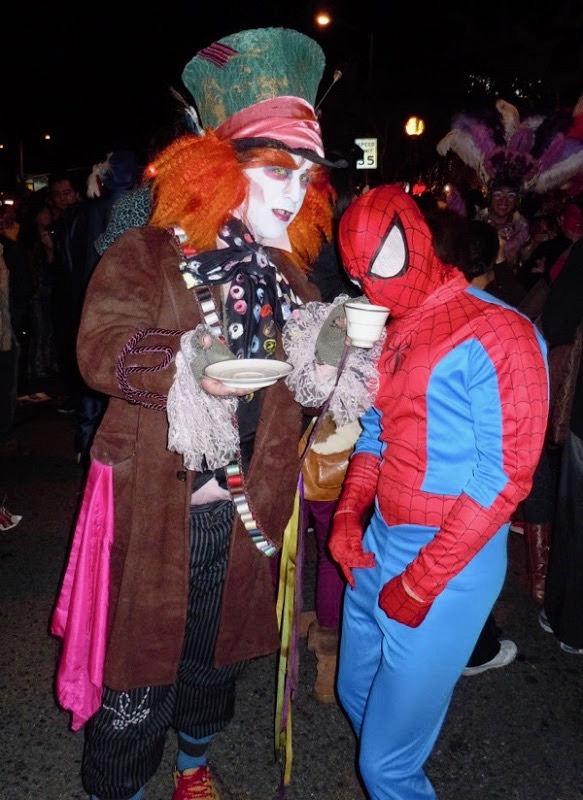 His costume designed by Colleen Atwood was exhibited at Disney's D23 Expo in Anaheim in 2011 and as you can see was recreated for Halloween (with tea cup prop) in 2010.
Gandalf the Grey costume
from The Hobbit: The Desolation of Smaug 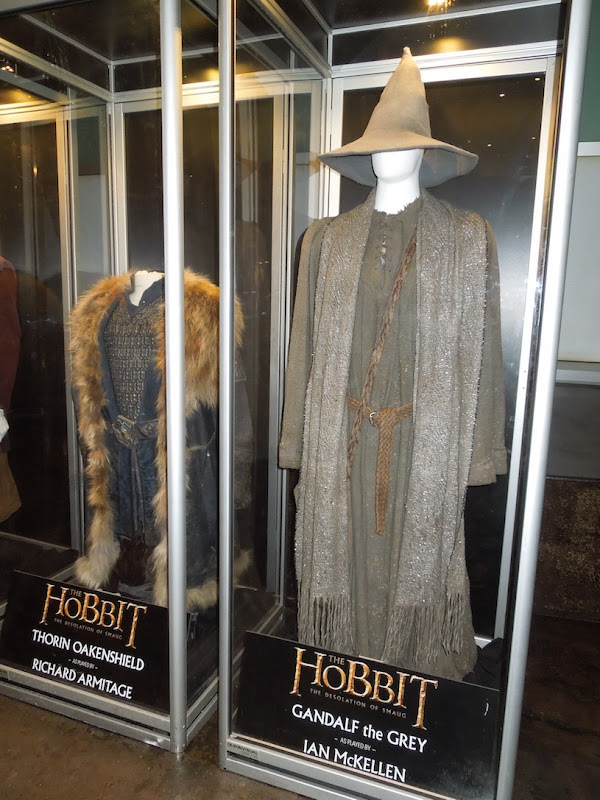 Ian McKellen reprised his role as 'Gandalf the Grey' in The Hobbit trilogy and his costume from 2013's The Desolation of Smaug installment was snapped on display at ArcLight Hollywood cinema. 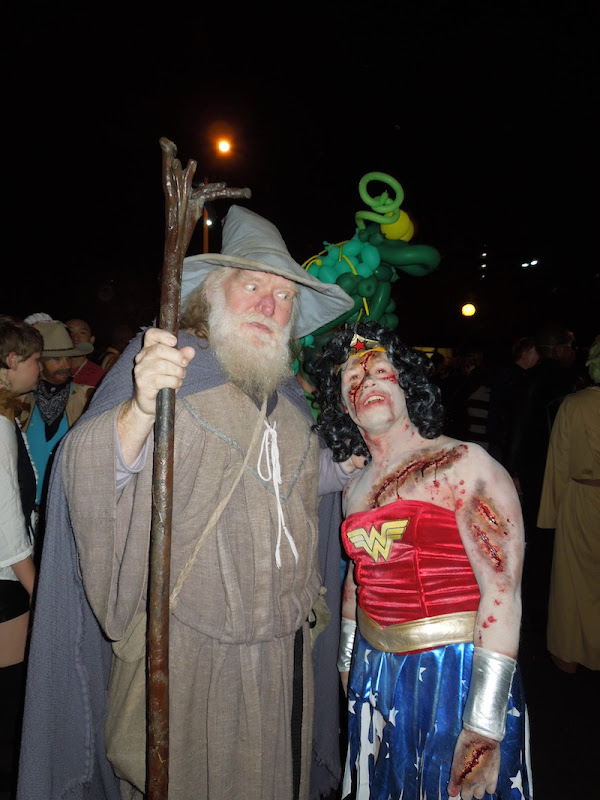 The Hobbit trilogy costumes were designed by Bob Buck, Ann Maskrey and Richard Taylor and as you can see the wizard was wandering the Halloween Carnaval in 2012 (no doubt inspired by his outings in The Lord of the Rings trilogy).
Julia Child costume from Julie & Julia 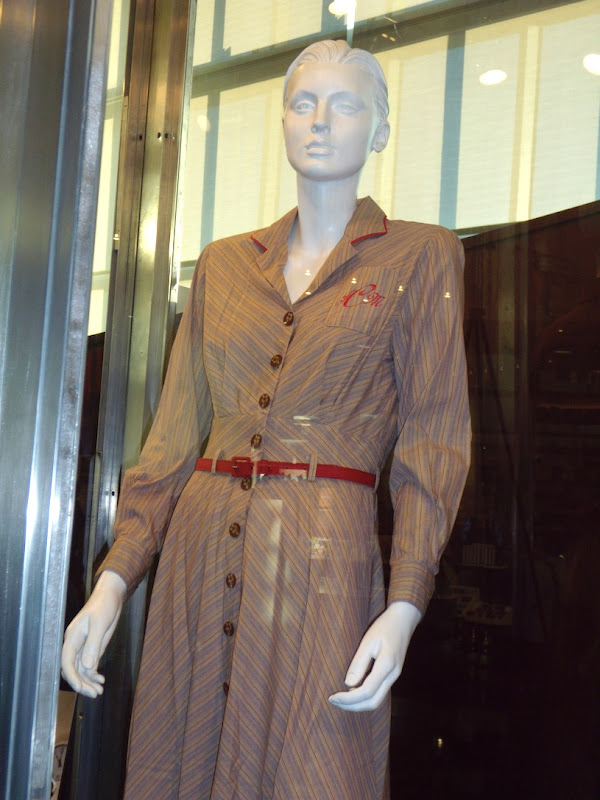 In 2009 Meryl Streep brought culinary legend 'Julia Child' to life on the big screen opposite Amy Adams in Julie and Julia, with costumes by Ann Roth on display at ArcLight Sherman Oaks. 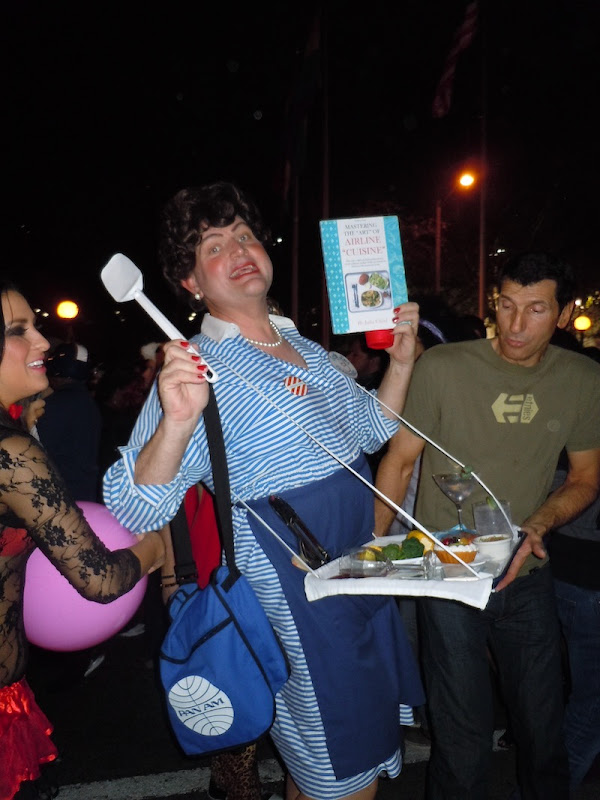 Here's someone paying homage and giving their own unique spin with a Pan Am themed 'Mastering the Art of Airline Cuisine' in October 2011.
Joker nurse costume from The Dark Knight 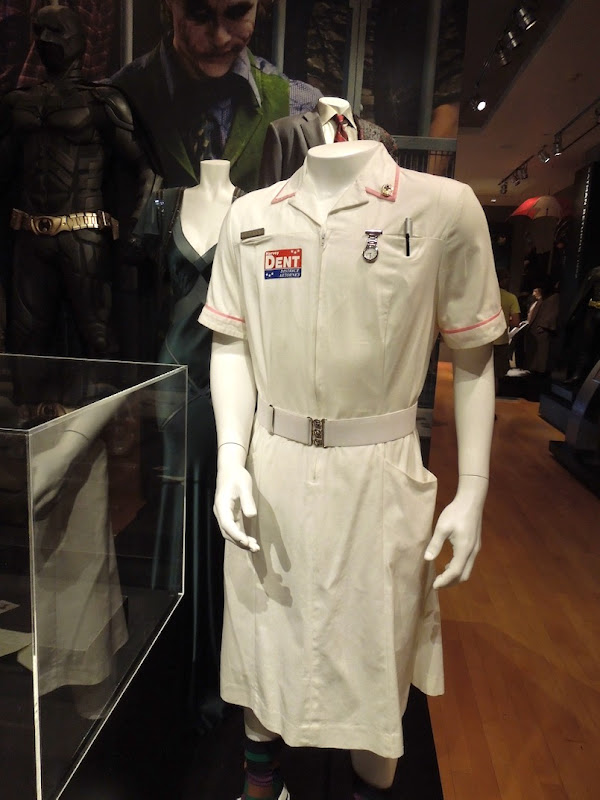 In 2009 Heath Ledger gave an Oscar-winning performance as 'Batman's' arch-foe, 'The Joker', in The Dark Knight. Lindy Hemming was Costume Designer on the DC Comics movie and this subversive nurse's outfit worn by the Joker was exhibited on Warner Bros. Studios Backlot Tour. 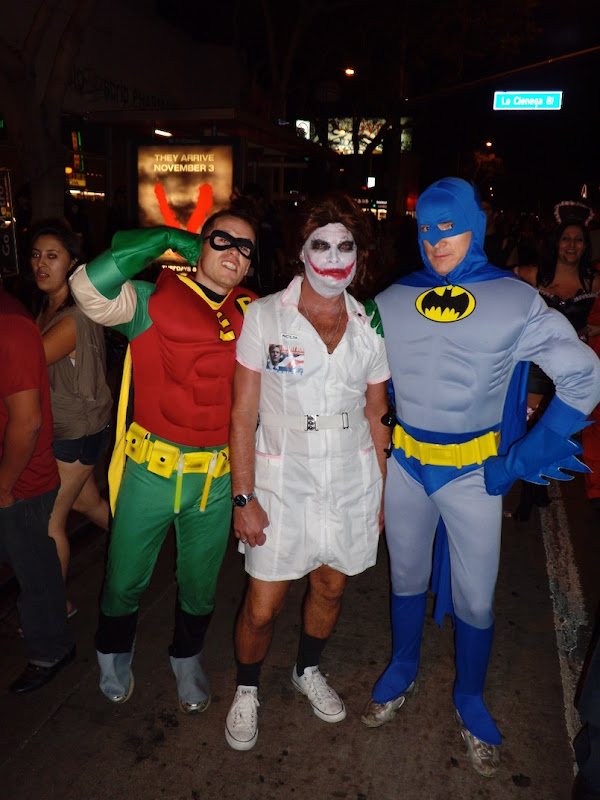 This creepy look was certainly an inspiration for some the same year at West Hollywood's Halloween festivities.
The Riddler costume from Batman Forever 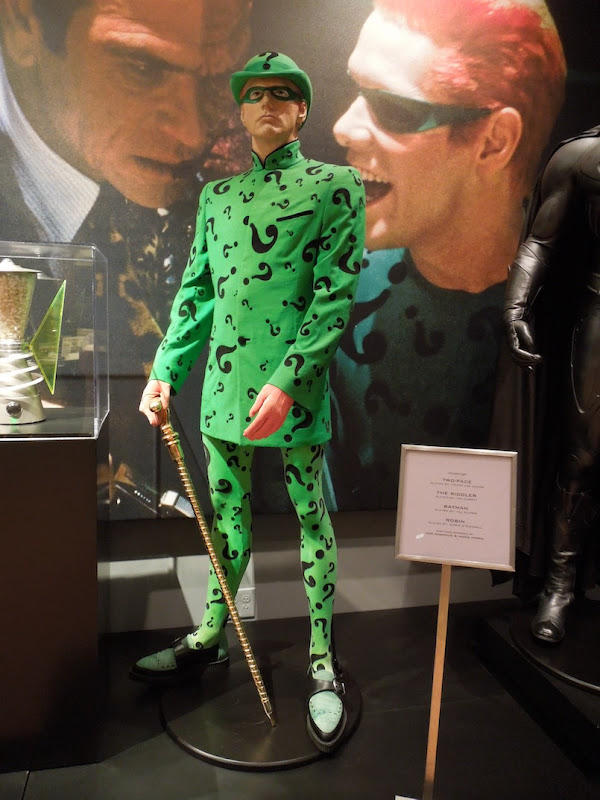 And sticking to the Caped Crusader's rogues gallery, Jim Carrey wore this green costume adorned with question marks as 'The Riddler' in 1995's Batman Forever.
Bob Ringwood and Ingrid Ferrin were Costume Designer's on the Bat-sequel and this costume was photographed on display at the 75th Anniversary Batman exhibit at the Warner Bros. Studios VIP Tour Museum. 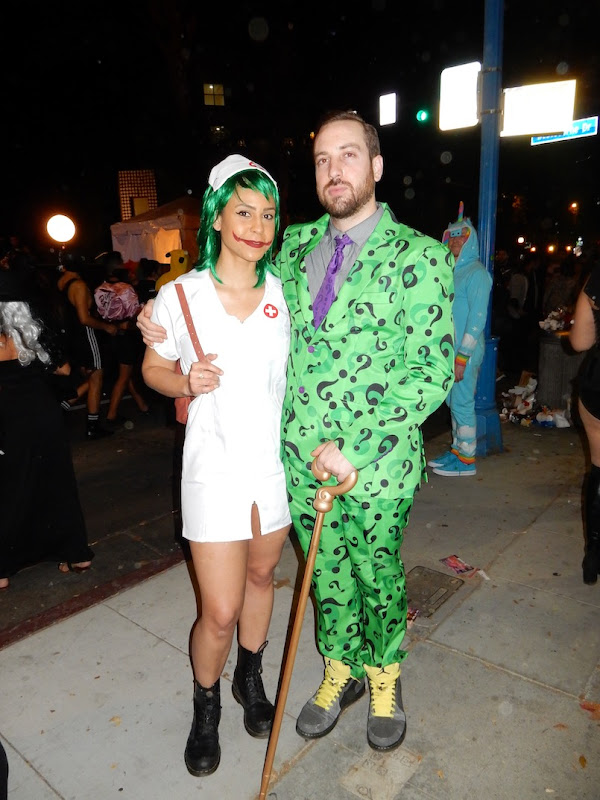 All these years later and Riddler is still a fan-favourite Halloween costume as this picture from 2018 illustrates.
Bane costume from The Dark Knight Rises 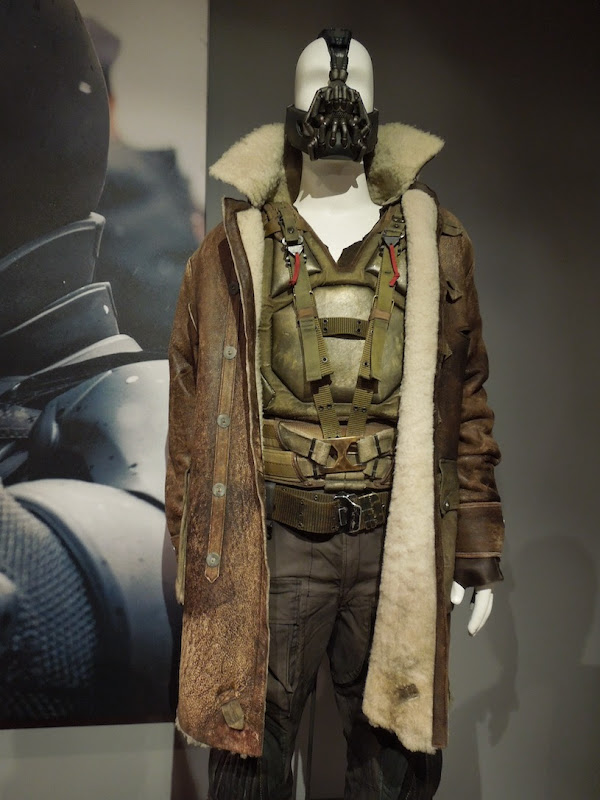 In 2012 Tom Hardy brought another of Batman's adversaries to life in the form of the backbreaker, 'Bane'. This menacing costume was designed by Lindy Hemming and also on display at the Batman anniversary exhibition. 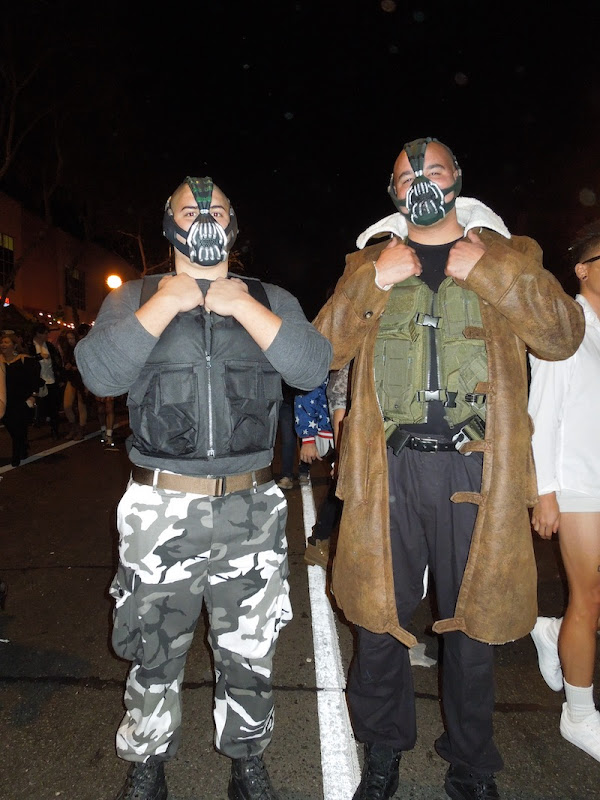 The following Halloween his villainous look was still a popular choice for men along Santa Monica Boulevard.
Wonder Woman and Queen Hippolyta costumes 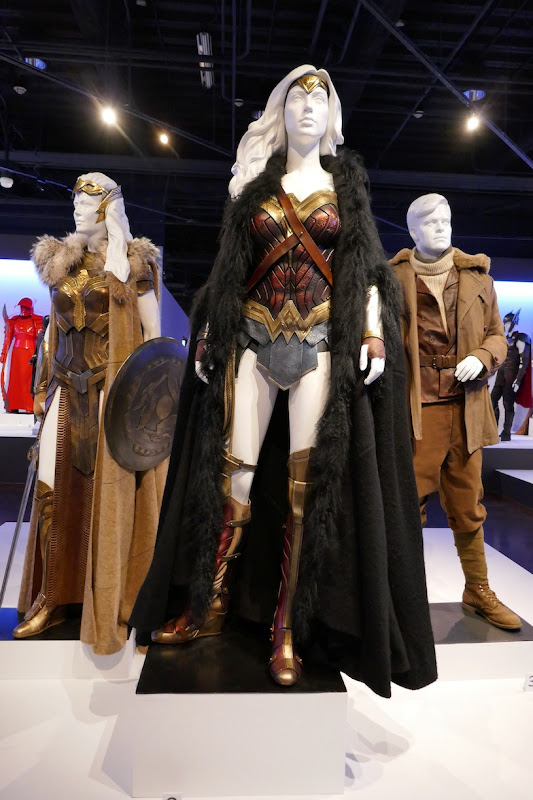 From villains to heroines, and Gal Gadot took 'Wonder Woman' to box office glory in 2017 in her own solo movie. She was joined on the big screen by Connie Nielsen as her mother, 'Queen Hippolyta', in these costumes designed by Lindy Hemming (although the look of the Amazonian warrior princess was reimagined by Michael Wilkinson in 2016's Dawn of Justice). 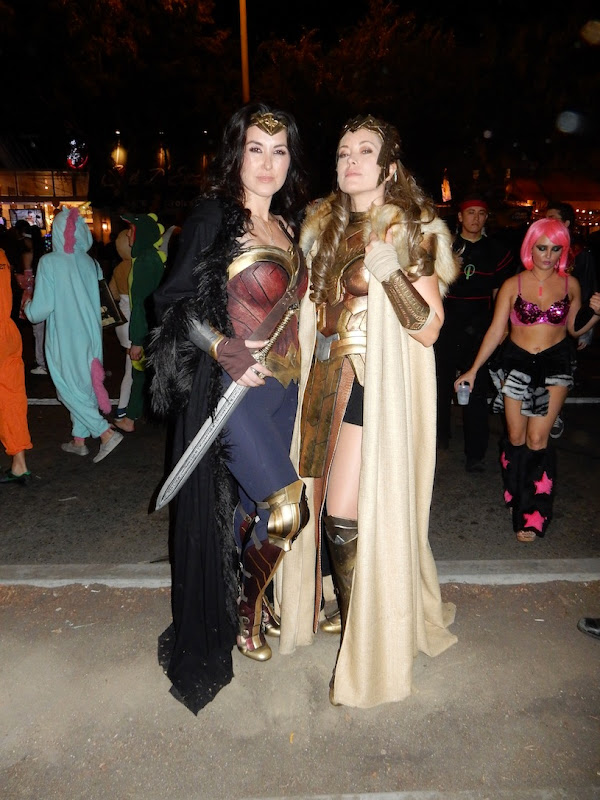 This duo of screen-worn costumes was on display at Downtown L.A.'s FIDM Museum and as you can see wonderfully replicated at 2017's Halloween parade of costumes.
Fourth Doctor from Doctor Who 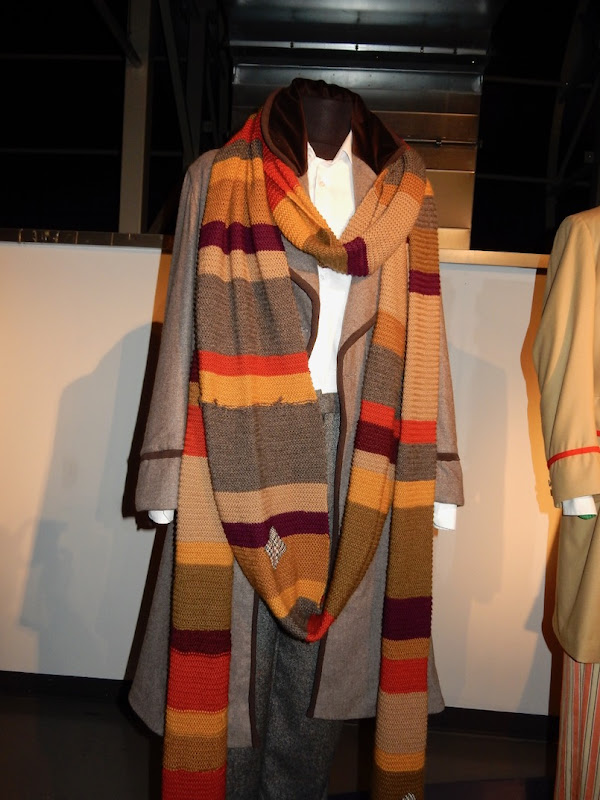 From superheroes to travelers in time and space, Tom Baker brought 'The Doctor' to life as the Time Lord's fourth regeneration from 1974 to 1981 in BBC's long-running sci-fi series, Doctor Who. 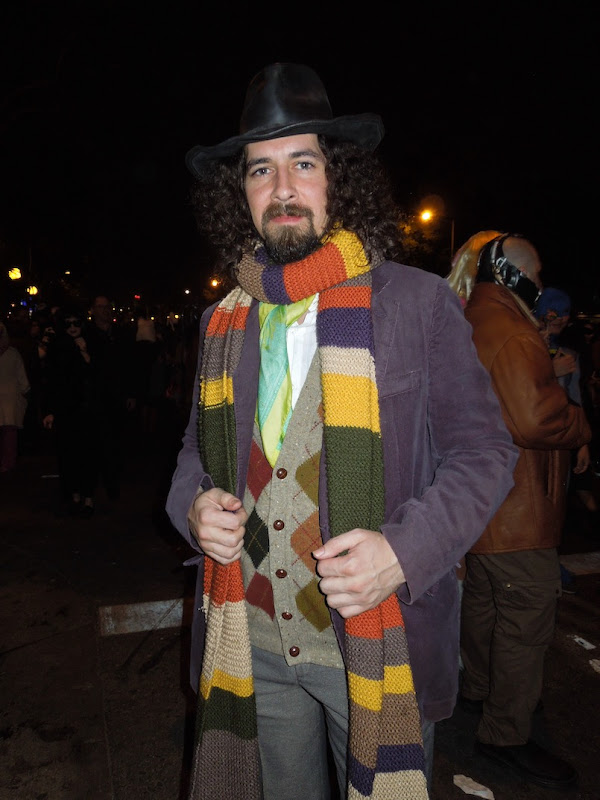 His costume was photographed at the Doctor Who Experience in Cardiff, Wales, and as you can see his iconic extra long, multi-coloured striped scarf is easy to emulate and instant recognisable back in October 2012.
Voldemort costume from Harry Potter: The Deathly Hallows 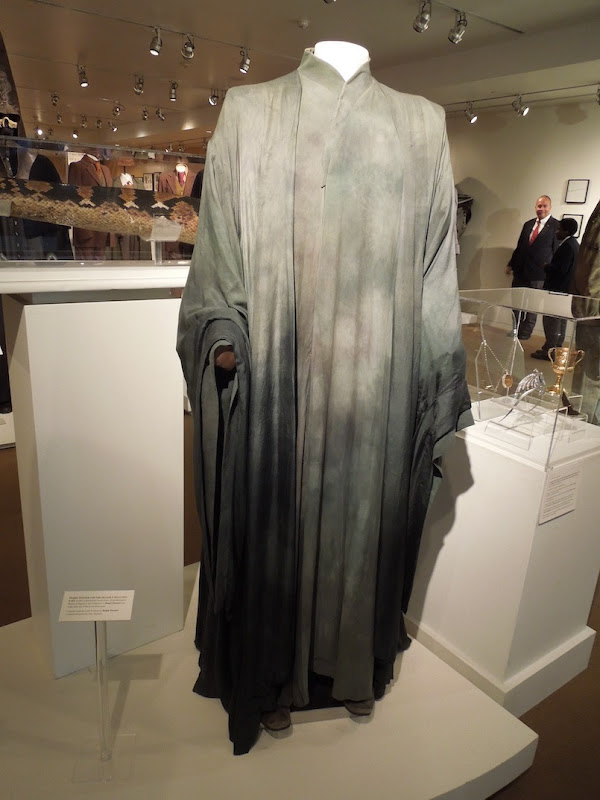 'He Who Must Not be Named', or 'Voldemort' as brave wizards call him, was played by Ralph Fiennes and the dark wizard wore this robed look in 2011's The Deathly Hallows Part 2 installment in the Harry Potter film franchise. 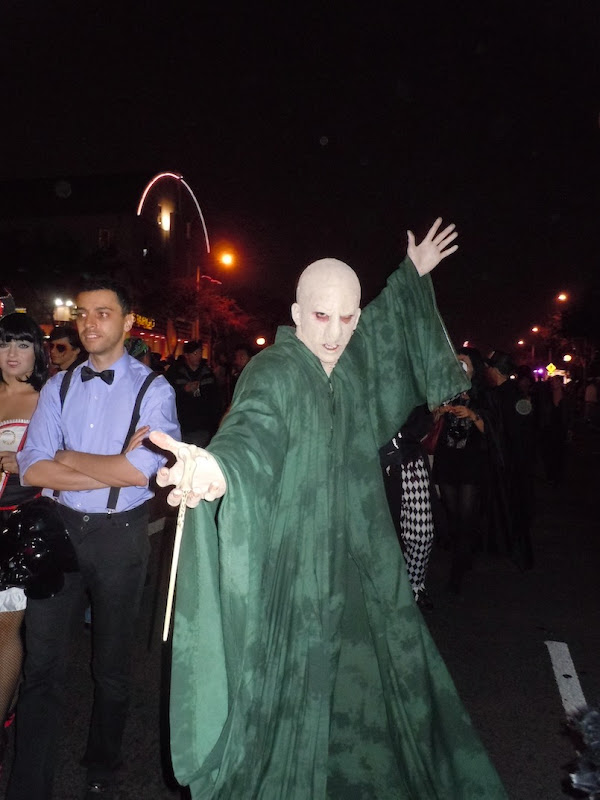 Jany Temime was the magical Costume Designer and his screen-worn wizard robes exhibited at Warner Bros. Studios VIP Tour Museum, and as you can see people really like to get into their roles at 2011's Halloween proceedings.
Tron costume 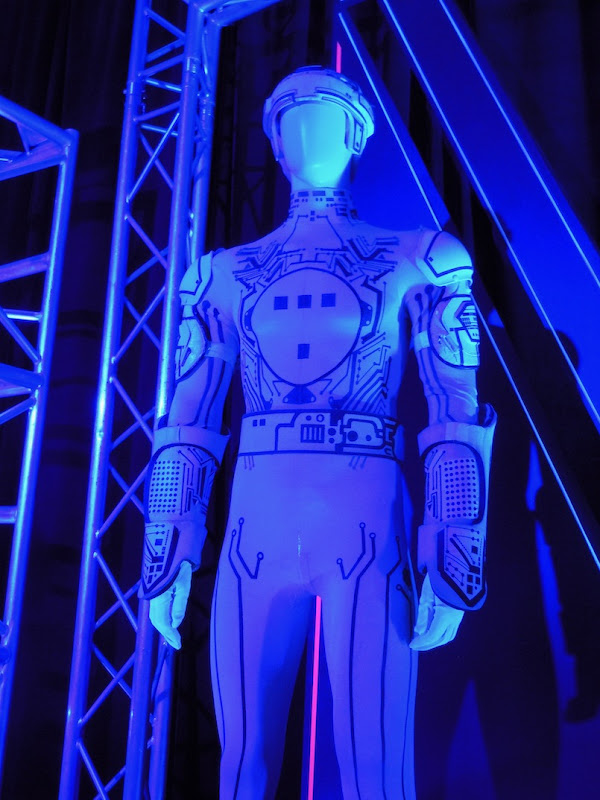 In 1982 Bruce Boxleitner brought the digitized program 'Tron' to life in the Disney sci-fi movie, and sported this costume designed by Elois Jenssen and Rosanna Norton, enhanced with the latest special effects that the 1980s had to offer. 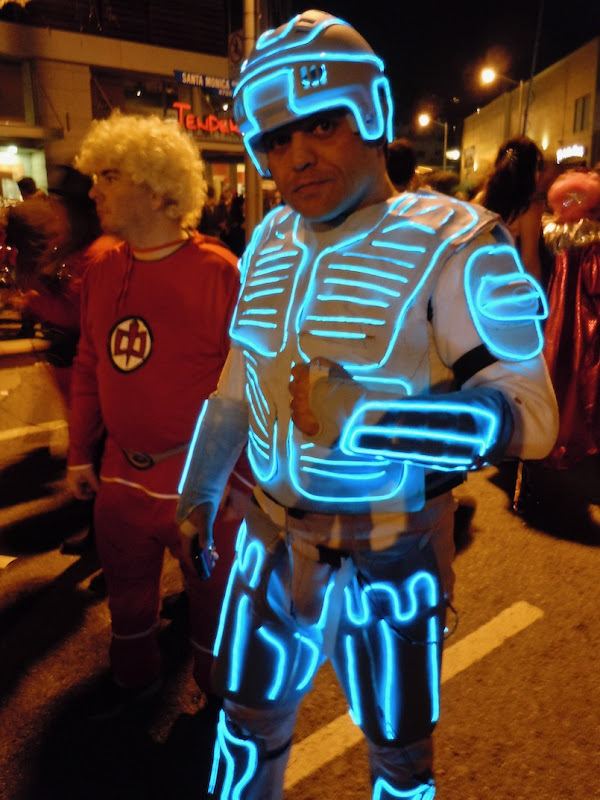 That classic 'Light-suit' was on display at one of Disney's D23 Expos and as you can see the iconic look has inspired generations since to create their own glow-in-the-dark neon outfits, like this one from Halloween 2010.
Jolly Holiday costume from Mary Poppins 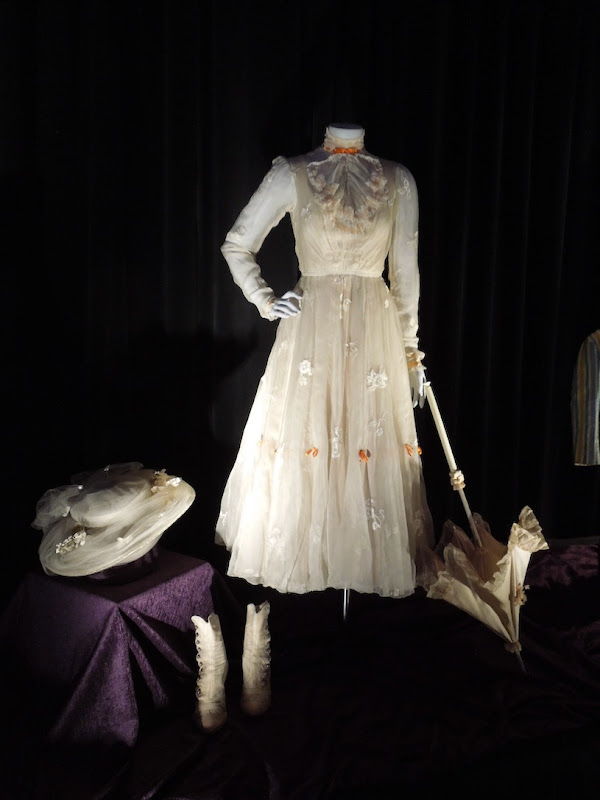 And speaking of Disney, Mary Poppins is always a fancy dress favourite at Halloween, especially Julie Andrews 'Jolly Holiday' look from the classic 1964 family musical. This Oscar nominated costume by Tony Walton was also photographed at one of Disney's D23 Expo fan conventions. 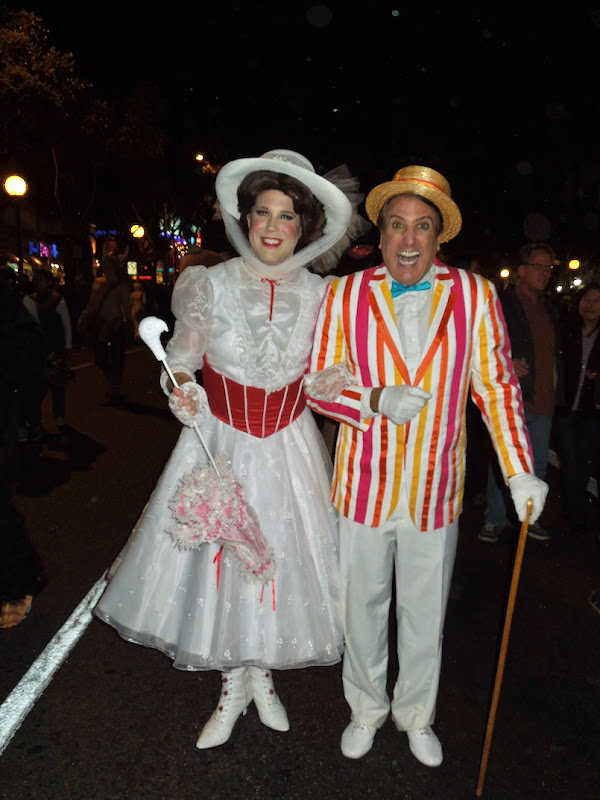 As you can see in October 2013, both Mary and her chimney sweep friend 'Bert' (played by Dick Van Dyke) were still providing Halloween costume inspiration.
Buddi doll prop from Child's Play 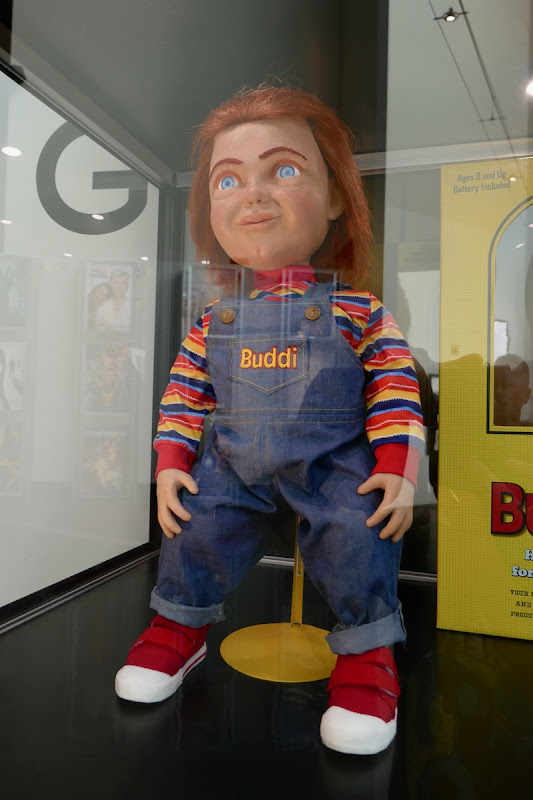 And finally for this collection of costume ideas, here's a 'Buddi' doll prop from 2019's Child's Play horror remake, who turns into the murderous 'Chucky'. 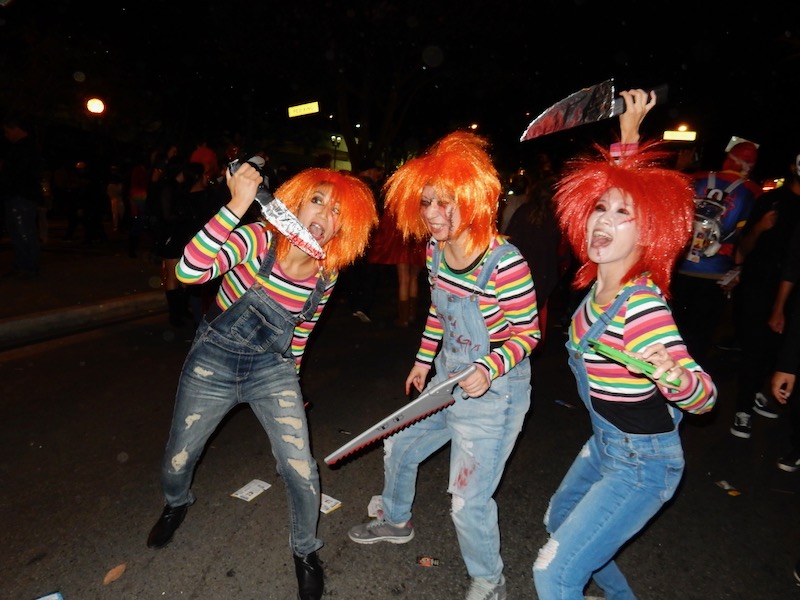 Group costumes are always all the rage at West Hollywood's annual Halloween festivities and you can see Chucky was making a killing in October 2017, with participants really getting into the part.
As you can see, the movies and television are real inspiration for Halloween. However you choose to celebrate the spooky season this year, stay safe and have fun and maybe all these examples will give you some ideas for future Halloween festivities when the pandemic nightmare is over.

Best Coffee Mugs That Every Coffee Lover Will Adore

Halloween costume inspiration from cinema and TV from years past...