SRK is also working from home, spotted filming on his balcony. 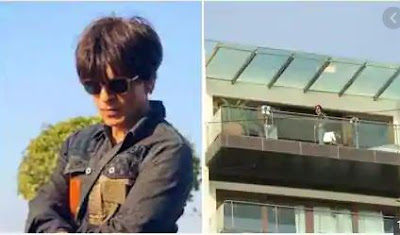 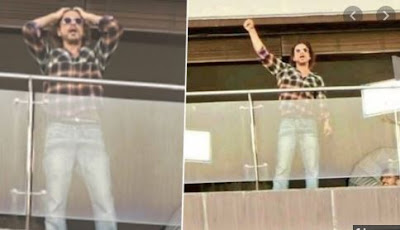 Shah Rukh was clicked by the paparazzi at his Mumbai house Mannat on Friday evening, as he shot for a project during the golden hour. He has a large light and a camera set up in front of him. Another man was seen in the frame, holding a mic above him.
Shah Rukh was seen in a plaid black shirt, blue jeans and dark sunglasses. His fans were happy to finally catch a glimpse of him. “After so long,” wrote a fan. “King of bollywood wish him luck in next movie,” wrote another. 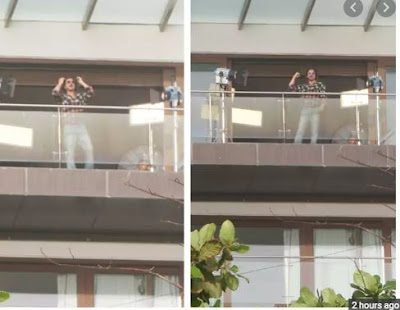 During the lockdown, Shah Rukh had taken part in multiple fund-raising concerts, live videos and public service announcement videos. He even sang and filmed a song titled Sab Sahi Ho Jaayega with his youngest son, AbRam for the iForIndia concert.
Shah Rukh was last seen in 2018’s Zero. The film was directed by Aanand L Rai and also starred Katrina Kaif and Anushka Sharma. The film was a flop at the box office and since then, Shah Rukh has not announced his next project.
There are reports and rumours that he will make a special appearance in Brahmastra and Rocketry: The Nambi Effect. Brahmastra is directed by Ayan Mukerji and stars Amitabh Bachchan, Ranbir Kapoor and Alia Bhatt. Rocketry stars R Madhavan as scientist Nambi Narayan. “In Rocketry, he plays a journalist who interviews scientist Nambi Narayanan and takes us through the protagonist’s journey in flashback,” a source told Mumbai Mirror.

SRK is also working from home, spotted filming on his balcony.