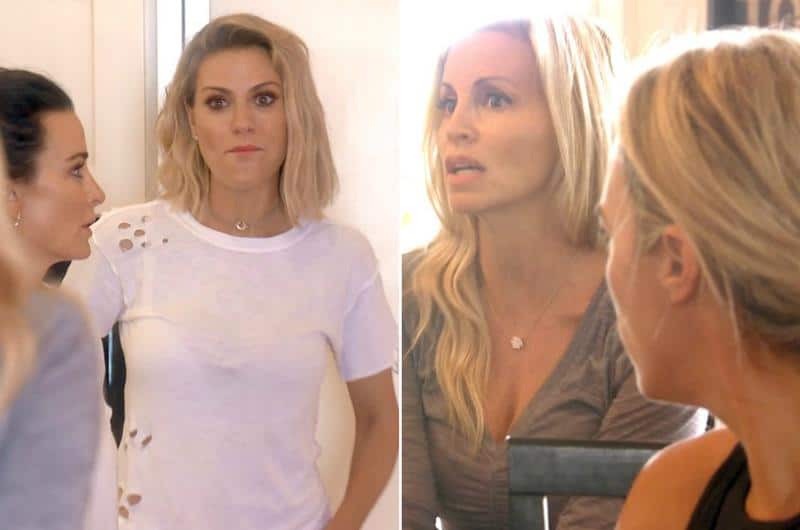 Dana Point, California: the scene of the 24 hour stay at Teddi’s beach house. Dorit and Teddi reminisce about how great last night was. We viewers are treated to a video reel of Kyle twerking, Camille mom-dancing, and Lisa getting flashed. Needless to say, all the women enjoyed themselves thoroughly…all but one.

Erika checked into a hotel the night before because of her “stomach cramps.” Let’s be honest. She checked into a hotel because she couldn’t fit Mikey, her creative director, in the bedroom with her. Plus you need to count the hair and make-up guys. Oh, and the costume designers, too. It just simply wasn’t going to work. When Erika returns BACK to Teddi’s house in the morning, Kyle gives Erika the run-down on the antics from last night, yet no one seems to “want to talk about” how Erika bounced the night before. Elephant in the room much?

As an added bonus, Teddi’s personal trainer comes over and he’s so cute that even LVP gets moving. Aerobics may not be her thing, but at least she looks good doing it- anyone else check out that diamond bracelet? Whilst some of the gang works out, Dorit spills the beans to Erika about how some of the ladies-i.e. Kyle and Teddi- were talking smack about Erika sleeping at a hotel last night. Erika is p*ssed and doesn’t even let Kyle wipe off her forehead before she lays into them. “I think it’s weird that you should care, but ok.” Way to go, Dorit. I love how Camille straight up calls Dorit a “tattletale.” I am having a very difficult time believing that Erika left the beach house because of “cramps.” Erika does her best Erika Jayne sashay out of the room and stomps off.

Camille is killing the game and calls Dorit what she really is: a trouble-maker. Erika stands like a Madame Tussauds statue and cries as only someone without a soul would cry. She tells Teddi she “doesn’t need any more petting.” These ladies, man. Way to go, Dorit. Way to go. I stand with Teddi. It is most certainly weird that this chick said she was staying over and then rolls out to a hotel. Erika claims she is “done with the whole thing,” buuuut we all know that means jack sh*t when it comes to these women.

LISA RINNA IS WORKING, ya’ll! She loves to tell everyone so much that she is even talking the make-up guy’s ear off. “When I think of comedy and sitcom, I don’t think people necessarily think Lisa Rinna.” I’d have to agree with that, Rinna. In fact, I’ll go so far as saying people don’t necessarily think Lisa Rinna any time television is mentioned. I do feel bad for Rinna, though. She is missing out on all this juicy drama. On the ride back to Beverly Hills, Kyle confronts Dorit. Let’s see if LVP comes to Dorit’s rescue this time. Kyle is annoyed that Dorit had to open her big fat mouth and tell Erika. Dorit really loves to stir the pot and goes as far as licking the spoon to boot.

Back home, we get a first hand view at the ever romantic love between Erika and her husband Tom. I am not even sure they ever make physical contact. While Tom sits adoringly and hears all about Erika Jayne’s “overwhelming” life, she rambles on and on about how difficult it is to be a rock star. Erika shares that she is “excited, yet intimated” that she is writing a big time book. Tom asks for a signed copy. I bet she makes him pay for it.
Meanwhile, Rinna and her wanna-be-Haddid daughters are packing for New York Fashion Week. Actually, we learn that all the ladies are traveling to attend the shows. Dorit is very comfortable leaving to go to NY since PK’s parents and her parents have been hanging at their house since the infamous PK birthday party. She has like…4 more babysitters. Plus the entire house staff that she keeps on the reg. Homegirl is set.

Before heading to the east coast, Teddi and Kyle meet to shop, because what else would two grown ladies be doing in the middle of the afternoon on a week day? Kyle takes Teddi under her wing and wants to help her get ready for fashionable events; however, nothing is more entertaining than watching all these chicks pack for New York fashion week.  Erika’s intensity. LVP’s shoe closet. Dorit’s fashion forward hubby picking out her outfit. The luggage that they have is probably more expensive than my house, but yolo, right?

Rinna’s already in New York cuz her model daughter Delilah is moving into her apartment. Rinna is SWEARING that Delilah is paying for everything herself….however it seems as though HarryHamlin hooked his daughter up big time. A sofa. Some more furniture. And $500 later, Rinna has purchased some décor for her independent daughter. That’ll show her!

The rest of the ladies arrive in New York and Kyle and LVP break off from the group to check out Kyle’s store on the Upper East Side. Kyle talks like a real boss lady with her employees and gets set up for her store party. Later, Rinna, Teddi, Dorit, and Camille gather and hear alllllllllll about Rinna’s girls, I mean, eat dinner.

Erika trickles in after what I can only assume was an entire Broadway production that took place to get her ready for the night. Of course, big mouth Dorit has to pick at an old scab and tells the girls about how LVP stormed out of her dinner with her and Kyle. She spins the story in such a dramatic way and they all giggle and chuckle and Dorit continues to pick when she fills Rinna in on what happened at Teddi’s beach house. Does this girl EVER learn?! Erika speaks in third person and lets them all know that “Erika is gonna do, what Erika wants to do.” Dorit word vomits drama, drama, drama and is absolutely loving the attention. Bet she won’t be loving the repercussions once LVP hears about this…

TELL US – WHAT ARE YOUR THOUGHTS ON THE RHOBH RECAP & LATEST EPISODE?