Vanderpump Rules Recap: Stassi Has A Meltdown On Adderall and Tequila 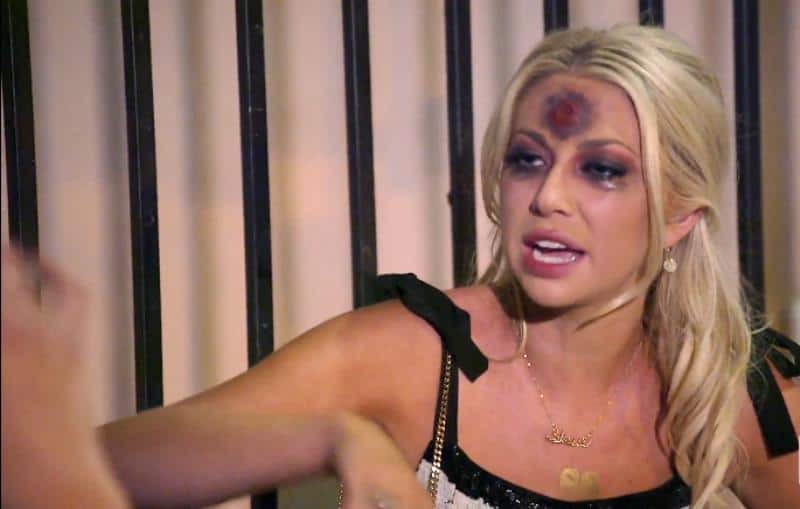 We all know that Stassi Schroeder loves a good murder…I’m just not sure who’s going to be her next victim on this episode of Vanderpump Rules. I hope it’s “Jason.”

Over at Dapper Cadaver, Stassi explains her murder themed birthday party to Katie. The girls head to the store in hopes of nailing the “death” of Stassi’s twenties. Strange? Yes. Kinda amazing? Of course. The guest list seems pretty wack, especially since Patrick, Stassi’s on again-off again boyfriend, previously blocked her whilst he traveled to Amsterdam, is invited. Huh? Exactly.

Turns out Ariana has the same birthday as Stassi. #bridewars. I love how Ariana tries to be too cool and so “above” everyone else and their “drama,” yet she is having a Kings and Queens themed birthday party since she is the self-proclaimed “queen of everything.” I believe that title is already taken by Lisa Vanderpump.

Scheana, LaLa, and Billie Lee join Ariana as they try to find JUST the right outfit for Ariana’s big party. Yup. Ariana’s just “one of the dudes” in her red thong bathing suit. Ariana explains that although she is turning 32, she is not a “fan” of her nether areas. Um. Ok?

Oh yea. Tom Tom. Member that restaurant that the two Toms signed up for as kinda-sorta business partners with LVP? Turns out it is actually still in the works. While Tweedle Dee and Tweedle Dum explain their strip club adventures to their boss LVP, she comes bearing good news! The permits are approved. Now it’s time for the big check. The one that solidifies their “partnership” with the one, the only, LVP.

To kick of her 32nd birthday, Ariana decides to see a therapist to try and get herself out of her funk. She needs to “get her head right.” Ariana shares her darkest things with this therapist. We learn that she is very critical of herself. She explains that if she’s wearing a bathing suit or shorts, she puts make-up all over her body. Ariana also discusses how Tom is her partner, in many ways, which is an awesome thing to say about a boyfriend and it makes me like Tom just a little bit more. Her anxiety levels are higher than any viewer probably realized because she puts out such a confident version of herself. I hope she figures herself out cuz no one should have to feel the way she feels now.

World Dog Day: another amazing party that LVP celebrates. How great is this woman?! LVP hands out tees to the gang that made it over to her castle. She also asks James to spin the event. He is really moving up in the world! LVP asks Brittany to hang back so she could discuss the Jax incident with her. She hated the way he behaved and LVP explains that she does NOT want Jax at World Dog Day. Uh-oh.

Sandoval creates a breakfast for a king, I mean queen, to celebrate Ariana’s birthday. Super cute. The couple discuss Ariana’s therapy session and Tom still wants to know what’s up with the sex…or lack thereof. Ariana tries to let him know that she is just not comfortable with herself and therefore does not want to be touched. Sandoval understands that “certain things turn” Ariana off, and Ariana, unfortunately is taking everything very personally as she goes through her thing. It’s a bad combo.

Katie and Kristen head over to Stassi’s place to get her ready for her murder party. “We’re like dead, but hot…like sluts in a morgue.” I can’t. Whilst making over Stassi, Katie shares that Kevin Lee came bearing flowers and an apology. He can go kiss my….

Meanwhile, Sandoval preps for the rival party- Ariana’s. He is just hanging out in his kilt (?!?) and is having an incredibly difficult time deciding what to wear because when it comes to costumes, he “can never be basic.” Sandoval puts on a fashion show for Jax and he is essentially losing his marbles over the outfit issue. While Jax tries to help Sandoval play dress up, Brittany calls and lets him know that he is not invited to World Dog Day. Oh no. NOT THAT!

Let the dueling parties begin! WHAT IS LALA WEARING AND WHAT DID SCHEANA JUST COMPARE HERSELF TO? Max from The Wild Things with a hint of Cleopatra?! LOLOLOL. Sandoval enters to introduce his queen. The girl looks awesome and her costume is outrageous. Speaking of outrageous, Tom in his maleficent costume is obscene. I have zero words for this guy. Zero.

Of all the nasty, grotesque, and horrifying things at Stassi’s party, Schwartzie explains that the ranch fondue fountain takes the cake. I actually think the stripper from Katie’s bachelorette party is slightly frightening. That and seeing Stassi hold a fake gun whilst hugging her man-friend, Patrick. Patrick seems really weird as he explains the only time he really wished someone was with him on his Amsterdam vaca was when he was at the Van Gogh exhibit. OMG, you too?! JK.

While celebrating, Ariana lets Tom know that “one huge thing is time spent” with her. As much as I make fun of Tom, he really is a good boyfriend. The two of them talk about how they are each other’s number ones, but it seems like they can “bump crowns” soon enough based on this make-up sesh. Happy birthday, Tom! I mean, Ariana. HA! Ariana’s party has been one of the best she’s had. Jesse Montana and his back up dancers perform for her and I kinda feel like I’m at a N’Sync concert.

Over at Stassi’s snooze fest of a party, Patrick shares that he “doesn’t care if Stassi has sex with other people.” WHAT. Seems like Patrick is a super pompous dude who thinks he can do pretty much anything and Stassi would still want him. Because this party is as boring as the death theme itself, Katie thinks it would be hilar to do body shots off of the stripper from Vegas. Stassi wanted the stripper there AS A GUEST, but alas, Katie didn’t get the memo. Stassi explains that she was really “f*cked up on adderall and tequila” and thus begins the “it’s my birthday” drama. Stassi stomps off with a fake bullet hole in her forehead, behaving like a true 29 year old, leaving her guests confused and paying the tab.

Finally, World Dog Day is here. Everyone is carrying their pups cuz why would dogs walk on a leash? Duh. There’s a pup pageant, a crown, and a Sandoval carrying a dog in his shirt like a baby. YUP. Peter fills in Ariana, Tom, and Scheana about Stassi’s melt-down and they all fake surprise. Like we didn’t know that would happen?! Brittany finds her way over to LVP where they AGAIN talk about Jax. LVP is peeved that Jax hasn’t even reached out via text…unlike Stassi. Katie receives a “Stassi circa 2012 melt-down” apology text and Katie lets Schwartzie know that not only is she annoyed at Stassi, SHE picked up the giant tab. Stassi better pay her back before LVP cashes Schwartzie’s TomTom deposit. #timing.

TELL US – THOUGHTS ON THIS VANDERPUMP RULES RECAP AND LATEST EPISODE?

The post Vanderpump Rules Recap: Stassi Has A Meltdown On Adderall and Tequila appeared first on Reality Blurb.

Vanderpump Rules Recap: Stassi Has A Meltdown On Adderall and Tequila