Star Wars Showdown: Rogue one vs The Force Awakens 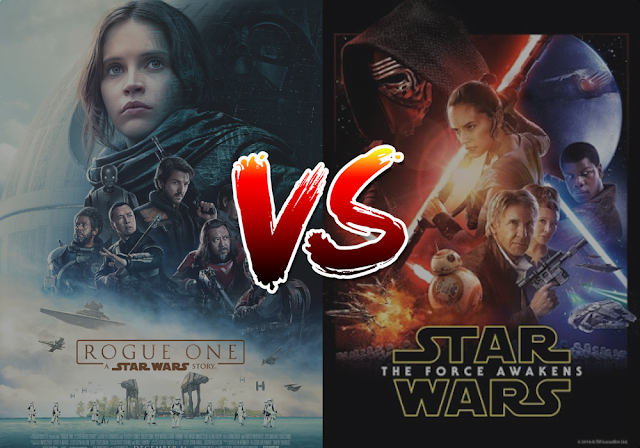 Star Wars is one of the greatest movie franchise of all time, it spans 40 years, beginning with the classic “A New Hope”, which was first released in theatres in 1977. In 2012 Disney coming of the success of the Marvel Cinematic Universe, acquired Lucas Film and all the intellectual property associated with the franchise for 4.05 billion dollars. Following this, Disney kicked started the process to create a series of films called the sequel-trilogy along with a set of anthology films, as of April 2017 we have both opening entries, with the sequel trilogy being Episode VII: The Force Awakens and the first of the anthology films Rogue One: A Star Wars story. Yet there has been a “great disturbance in the force”, fans have been arguing back and forth, which is the better movie? So, let’s solve this most necessary of issues and decide which is the best new Star Wars Movie? (Spoilers are ahead if have not seen the movie)

Sprawdź swoje IP i pobierz darmowy VP…
How to Choose an Epoxy Floor Coating …
GALA DALI – THE MUSE OF THE SURREALIS…
Hollywood Dentist Providing Red Carpe…
Life at 57 - Where I'm At
Episode VII is set 30 years after Return of the Jedi (Episode VI, the last film of the original trilogy). The evil galactic empire has fallen, however all is not well with the galaxy. A group of remaining imperial soldiers and officers have formed a new faction called the First-order, which casts a dark shadow over the galaxy. The First-order is led by the mysterious supreme-leader Snoke along with the red cross guard lightsabre wielding Kylo Ren.  The Jedi are all but a myth, their role as keepers of the peace have all but been forgotten. The protagonist, Rey (Daisy Ridley) is an abandoned orphan living on a desert planet, yet much of the story centres around Finn (John Boyega), a turn coat storm trooper. Additionally, the cast of the original trilogy plays a central role in this film, this is one of many through backs to the original Star Wars saga.
Rogue One on the other hand plays to a different beat. It is set just before the events of Episode IV: A New Hope, it can be thought of as Star Wars Episode 3.9. Rogue one loosely follows the story of Jyn Erso(Felicity Jones) daughter of the Death Star designer Galen Erso (Mads Mikkelsen) and how she and the rebel alliance stole death star plans from the empire. The ensemble cast of captain Andor(Diego Luna), the droid K2SO(Alan Tuydk), the imperial pilot boohdi(Riz Ahmed) and the monks Chirrut(Donnie Yen) and Baze(Jiang Wen) play memorable roles despite the lack of screen time and development. The entire plot of the movie can be easily summarised by the now iconic title crawlof Episode IV. Ironically, this is something rogue one does not have. Similar to TFA there are plenty of throwbacks to the original trilogy, though there are bit more subtle and harder to notice when compared with Episode VII.
With Episode VII, J.J Abrahams tries to create a film which would attract a younger audience to the franchise whilst at the same time invoke nostalgia such that older fans are able to connect with the film. From the box office earnings to the sales of the merchandise Episode VII was immensely successful. But a lingering thought remains, was it a good movie? Upon re-watching the film the answer is “meh”, while it’s not a bad movie per say, it’s not worthy of the overwhelming positive response that it received, it is at best a mediocre film. While it captures the style of the original trilogy, which is something that the prequels never did, TFA has no soul of its own. It copies far too much from episode IV in terms of broad plot points. Both movies have
This is where Rogue One surprisingly shines, the original trilogy is 4 decades old at this point, but Gareth Edwards has crafted a movie which works so well that once I finished watching rogue one in theatres last year, I went home and put my copy of episode IV in the Blu-ray player and started watching. Episode VII borrows from the original trilogy, rogue one enhances it. Despite the fact we pretty much know the broad plot points of rogue one, it’s visualises brand new concepts into the star wars universe. We get a background into the construction of the death star and the famous exhaust port. We see a much more splintered rebel alliance pitted against a truly gargantuan empire. For the first time we see why Darth Vader is so feared and for the first time we see the self-sacrifice and plight of the rebellion.


Since this movie is directed by Gareth Edwards, Rogue one has a slow burn. For many they will consider the first half slow, yet I saw it as building up to a spectacular second half.
I must admit that the first 30 minutes of TFA is excellent. Episode VII sets up the characters and their motivations perfectly. However, the film quickly squanders much these opportunities. The plot of a film can be thought of as a series of elements which once set up partakes in a certain payoff being the conclusion/revelation. One of the largest flaws in Episode VII is story elements are set up perfectly yet the payoff is disjointed, the best example of this is the reveal that Kylo Ren is Ben Solo. Instead of utilising the scene when Han confronts Ben at Starkiller Base, it is revealed by Supreme-leader Snoke earlier in a scene with General Hux and Kylo Ren. This diminishes the value of the reveal and the words

Characters too, are underutilised, Captain Phasma only has approximately 3 minute of screen time yet being built up as an important character. Finns crisis of conscience is all but glossed over by the end of the film.

The Story and pacing also feels jumbled, with Episode IV, the death star was a central theme, the plans stored on R2D2 related to it, it destroyed Alderaan and it was blown up by firing a proton torpedo into an exhaust port. Though with Episode VII, Starkiller base was not the central theme, it was shoehorned in the second half of the movie.
Rogue one on the other hand follows a more linear story structure, the central theme of the movies is the then secret mega weapon constructed by the empire. While it is a simple story, it is told well. While the characters of rogue one have nowhere near the character development of TFA, though it is sufficient. Plus, each character oozes with personality which more than makes up for the lack of development. My favourite character within Rogue one is the droid K2SO, he is in my mind the best robot within Star Wars. He is like a snarky C3PO, who is actually useful in a fight.

My second favourite would be chirrut, he plays the trope of the blind warrior. Chirrut embodies the mysticism of the force, while not being a Jedi, there are hints that he uses it, this in my opinion is the best way to demonstrate the force.

Rogue one plays like a war film, once the battle gets started, there’s a lot of action, a lot of death and plenty of sacrifices. This is the first film since Empire strikes back that we actually see war, but in rogue one the fight choreography is turned up to eleven in both the space battles and the ground war.

While Episode VII has many dull spots, it has just as many bright spots. The film is beautifully shot, for the first time in a Star Wars film we see the grand scale of the star destroyers.

One of my favourite scenes is on Starkiller Base when Han confronts Ben, half of Bens face is illuminated by red light and half by white. This perfectly illustrates the inner conflict within Ben/Kylo Ren.

The musical score is good, while it is not as epic as the prequels nor is it iconic as the original trilogy, it is composed by John Williams. Since the London symphony orchestra was not available for TFA thus music feels a bit flat. Rogue Ones score is composed by Michael Giacchino. While nowhere near as iconic like the originals, it does mesh well with the movie. It’s been reported that Giacchino composed the score for the film in 4 weeks. For that amount of time he has done a pretty good job.
Both these movies serve different purposes, Episode VII is about brand renewal whereas Rogue one is about Brand loyalty. Episode VII has been made for a younger demographic thus it tries to hold your hand and spell out plot points where ever possible. Rogue one feels more like a celebration of Star Wars up to this point, it acknowledges the prequels as much as the original trilogy. It acts as a bridge between the two, as such has been made for a more mature audience. I think Rogue one is a better film, to me as a Star Wars fan it’s the distillation of all that is awesome with franchise and it can stand on its own. It does not rehash what been done before, it takes chances and a different approach which ultimately payoff. Do you think I’m correct or am I dead wrong? comment below
By Abir

Star Wars Showdown: Rogue one vs The Force Awakens