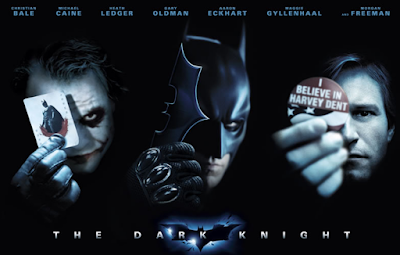 The Dark Knight
With over $1 billion in revenue, 2 Academy Award wins, Golden Globes and countless other accolades Christopher Nolan's epic never-to-be-forgotten 'The Dark Knight' (not to be confused with the 2001 flop 'Black Knight' starring Martin Lawrence) is a film that can not be missed!

Following on from 'Batman Begin's' in Nolan's trilogy chronicling The Caped Crusader, this movie shines with stellar performances by Christian Bale, Michael Caine, Morgan Freeman and of course the brilliant and masterful late Heath Ledger who shone in his role as the menacing villain, The Joker.

The movie takes us on a roller-coaster journey  revolving around the Joker’s quest to expose what he see's as the hypocritical nature of humanity and those who claim to be "good" and ultimately find out what The Batman’s real identity is. Gordon and Dent (played by Gary Oldman and Aaron Eckhart, respectively) are included on his hit list, and of courseeee there is a love triangle (like we see so often) between Dent, Wayne and Assistant District Attorney Rachel Dawes, played by Maggie Gyllenhaal, which The Joker manipulatively takes advantage of to attempt to destroy the 2 heroes of Gotham.

Ledger's epic performance is complimented by a good amount of dialogue in the movie, and it's very different to many previous depictions of The Joker in the sense that he doesn't just ramble psychotically, instead he's much more complex. He even somewhat coherently explains the reasons behind his maniacal acts of madness, leaving the audience in a position to almost empathise and understand him in some parts of the movie, despite he's sadistic acts of destruction. Christopher Nolan and his brother Johnathan created a screenplay with a lotttt more depth and poetry than any Batman movie before it.

Acting legends Morgan Freeman and Michael Caine also make fantastic and effortless appearances as scientific genius Lucius Fox and Wayne's butler Alfred respectively, adding even more depth and penetrating insight in a brilliant movie that you HAVE TO SEE if you have not yet had this blessing!

This movie is not to be forgotten and will forever remain one of my all-time favourites! I give it a 9.5/10 mostly thanks to Ledger's phenomenal performance as The Joker, which you will leave you speechless.