Hey there good people! I’m feeling a little Evil today. “Muahahaha!” That was my failed attempt at making you guys believe I’m evil. Today's Movie will be based on my mood. Anyways, aren’t you guys always tired of speaking about the good, the good and the good? I mean come on bad matters to the world too, doesn’t it? The good and bad both make the world how it is and make the people who they are. Let’s face it, there’s no good without evil and there’s no fun in life without the “bad stuff”. *Wink*. To be a little more philosophical here, I think well the bad helps us in ways we can’t even imagine. Well that was tonnes of good and bad, now let’s get on track – yes, I’ll be reviewing a movie and it’s an animated movie, it is- Megamind! We’ve had heaps of good superheroes saving the day, well now it’s time for the evil super-villain to save the day! As terrifying as it sounds, trust me it happens…just trust me.

It's Time To Rebuild
Money Beliefs That’re Holding Your Bu…
Hollywood Dentist Providing Red Carpe…
Muslim American servant NARRATOR
THE HIDDEN HILLS OF CADAQUES
I’m so glad that Dreamworks produced such a different kind of a movie, with such a different idea. Basically, Dreamworks presented this Superman Vs Brainiac fight which would probably never have been brought on television. This American computer-animated superhero comedy film was directed by Tom Mcgrath and distributed by Paramount Pictures.
Moving on to the real deal now, ‘Megamind’ is a story of a villain named, well, Megamind. Suppose it’s “The Incredibles” but for villains. I like The Incredibles and I like villains. It’s like a match made in heaven Dreamworks studios. The film shows the story of a super-smart super-villain, Megamind, who after a long and enduring battle one-day finally defeats his arch-nemesis, the much loved superhero Metro Man. Having Metro city to himself, Megamind discovers that his evil scheming has no purpose. So, he creates another superhero to fill-in as his enemy. However, his plan fails and backfires and he ends up creating a new super-villain. Then the movie takes a turn, which I think is interesting because it’s those grass is always greener on the other side kind of situation. With Metro city going wild, Megamind determines to set things right and finally finds his newfound purpose- as a superhero. 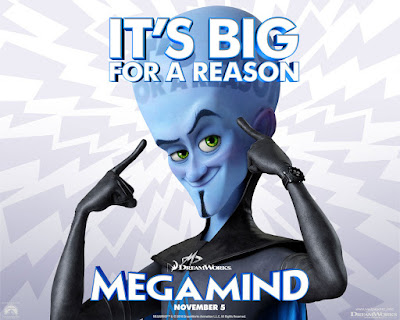 Since it’s an animated movie, one of the most important features, the voice-overs, are done perfectly. The actors who play each character have done their jobs to-a-T. Will Ferrell is Megamind, Tina Fey is Roxanne Ritchie (Who according to me is Lois Lane’s non-copyrighted counterpart), Brad Pitt is Metro man (Who has a total superhero voice vibe going on), David Cross is Minion (who is Megamind’s well…minion) and Jonah Hill is Hal Stewart (the new superhero that becomes super villain, I mean we could always count on Jonah Hill to mess things up). Even though it is a villain based film it also has a romance story, which was good, because you wouldn’t expect a romance story with a villain. The movie made you really feel for Megamind. I haven’t felt that much for a villain since The Joker did his magic trick.
The cinematography was pretty great and the action scenes were better than other movies around that time. The story was very different which is why I really liked it. All in all, the movie was pretty well done. Now go and stop judging all evil people, because they can sometimes be good, even better than the ones who claim to be good.

This post first appeared on Hello World, And Welcome To Our Movie, please read the originial post: here
People also like
It's Time To Rebuild
Money Beliefs That’re Holding Your Business Back
Hollywood Dentist Providing Red Carpet Smiles
Muslim American servant NARRATOR
THE HIDDEN HILLS OF CADAQUES
Tips for Getting Your Backyard Ready for a Late-Fall Party
5 Unusual Phenomena That Video Technology Has Given Us
Know 7 Most Translated Texts in the World- you’ll be Shocked
Best PS5 Games Deals and Offers with massive discounts
Chloe Grace Moretz Looked Incredible at “The Peripheral” Special Screening
5 Ways To Splurge While On A Budget
Pool Cleaner / Vampire Slayer – Day Shift on NetFlix
Roald Dahl book made into a Spielberg movie
35 Actors With Beards (Best & Worst Celebrity Beards)
The Only Lower Ab Workout You’ll Ever Need for V-Cut Abs, According to Science