Billy Madison
Ok then ladies and Gentleman of the Movie-blog-reading universe, so now that we’ve been 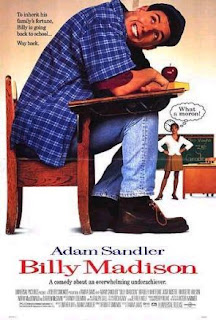 through some absolute classics of cinema: ‘The Dark Knight’ and ‘Oceans Eleven’ (which you bettterrr have watched! :P), it’s time to take you to a world filled with light-hearted humour that will have you in stiches. This, my friends, is the world offff (*cue drumroll) ADAM SANDLER.
Adam Sandler’s outrageously hilarious 1995 film ‘Billy Madison’ is a classic of a different sort. It’s not exactly the type of movie that has been critically acclaimed with Oscar nominations and a sophisticated script.  HOWEVER, it is the type of feel-good comedy movie that you will want to rewatch over and over again and make you think those critics who panned the movie are out of their depth.

Money Beliefs That’re Holding Your Bu…
Hollywood Dentist Providing Red Carpe…
Understand You
THE HIDDEN HILLS OF CADAQUES
Tips for Getting Your Backyard Ready …
The movie, which is directed by Tamra Davis, revolves around the protagonist Billy, played by Adam Sandler who is the heir to a Fortune 500 hotel company that his father Brian, played by Darren McGavin, has created. The only problem is that he’s not exactly the best fit to run a multi-billion dollar company. Billy, who at 27 is still leaching off his rich dad and not doing much with his life, naturally expects to inherit his dads company, however due to his careless attitude and childish antics his father threatens to pass on the reigns to the vice president Eric, played by Brad Whitford.
Coincidentally, Billy sees Eric as a massive jerk, which makes his father’s potential choice of inheritance even worse. To counteract this Billy makes a proposition to his dad: If he returns to school and passes all twelve grades in the space of twenty four weeks, he gets to run the company. If he screws up, however, his least-favourite-person, Eric, gets it.
This is where the hilarity begins.. In first grade, there are scenes where Billy uses his size and strength defeat the first graders in dodge ball but he then chills out a little when the teacher reads stories to the class. When he hits the 3rd grade, he becomes infatuated by his teacher, Miss Vaughan (Bridgette Wilson), who finds out about his mission and supports him in completing elementary school in record time. When he hits high school, however, the tide unfortunately begins to change and he is seen as a loser of sorts. He doesn’t let that discourage him though and continues to push through providing us with laughs and humor that will have you rolling.
All-in-all Sandler’s movie may not be a ‘Casablanca’ or ‘Citizen Kane’ but it is a great feel-good movie that delivers laughs continuously and is definitely something you will not be forgetting any time soon! I give it a 7/10 based on its comedic value.
By Arya


This post first appeared on Hello World, And Welcome To Our Movie, please read the originial post: here
People also like
Money Beliefs That’re Holding Your Business Back
Hollywood Dentist Providing Red Carpet Smiles
Understand You
THE HIDDEN HILLS OF CADAQUES
Tips for Getting Your Backyard Ready for a Late-Fall Party
5 Unusual Phenomena That Video Technology Has Given Us
Know 7 Most Translated Texts in the World- you’ll be Shocked
Best PS5 Games Deals and Offers with massive discounts
Chloe Grace Moretz Looked Incredible at “The Peripheral” Special Screening
5 Ways To Splurge While On A Budget
Pool Cleaner / Vampire Slayer – Day Shift on NetFlix
Roald Dahl book made into a Spielberg movie
35 Actors With Beards (Best & Worst Celebrity Beards)
The Only Lower Ab Workout You’ll Ever Need for V-Cut Abs, According to Science