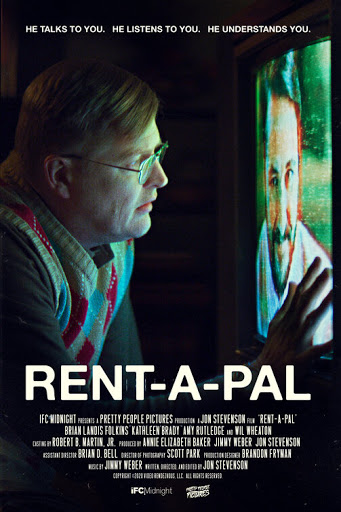 Rent-A-Pal is a 2020 thriller directed by Jon Stevenson and starring Wil Wheaton and Brian Landis Folkins.

The movie begins in 1990 with a man called David(Folkins), who is looking through dating videos. He looks at various women. He lives with his Mother, who is old and ill. He is her carer. The company that supplies the dating videos are called Video Rendezvous. David is hoping for a match but there is none. He is told that he should record a new video to get more interest. David isn't very confident with women and it shows when he records his video. He discovers a video called Rent A Pal and he is intrigued. He takes it home with him. He decides to watch it. There is a guy on it called Andy(Wheaton) and he wants to be pals with David. David doesn't know what to think about it and he stops it but it comes back on again. Andy talks to David about his life. David begins to reply. 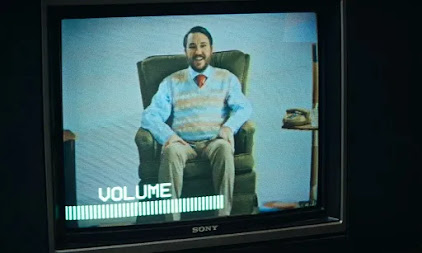 David gets a call from Video Rendezvous telling him that he has gotten some interest from a girl. It turns out to be a mistake and David is very upset over it. He goes back to Andy and they talk about what happened. Andy tells him stories about things that happened to him. They interact more. David starts to play it constantly. They play games and they swap stories. They become real friends. David ends up masturbating to Andy's sex stories. He gets caught by his mother. He goes mad and he has a fight with her. She is very upset. Andy laughs. Video Rendezvous calls and tells David that he has a match. Her name is Lisa(Amy Rutledge). They agree to meet for a date. They do and they get along very well. She likes David and he likes her. He is happy. He goes to tell Andy about it. Andy isn't very happy. He tells David that he won't have time to talk to him anymore.

David feels guilty about leaving Andy and he decides that he isn't going to see Lisa. His mother goes missing and he panics. Lisa shows up and she helps him find his mother. They bring her home and David invites her in. They chat and they kiss. The TV comes on and Andy comes on screen. He isn't happy. Lisa asks David about it. David gets mad at her and she leaves. The next day, she calls him and she wants to talk. He cuts her off. He discovers that Andy is missing. The video has gone. His mother has cut it up. He hits her and leaves her on the floor while he goes to Video Rendezvous to get another. Andy comes back up on the screen. He tells David that he doesn't need his mother. Andy pushes her down the stairs and leaves her there. Andy tells David that he is there for him. He is playing on all of the TV's in the house.Lisa shows up and sees what he has done to his mother. He tries to kill her, but she stabs him and escapes. He stumbles to the basement and Andy talks to him. He tells him that he has to say goodbye as David dies.

This is a weird film. I did like the premise, though. I thought that the idea of the sinister video was interesting. This was a tad slow in places and there wasn't enough suspense in it for me. It wasn't scary or creepy at all, but I suppose this isn't meant to be a horror movie. I think that it could have been a lot better overall. I did enjoy Wil Wheaton as the sinister Andy. He did a good job in this. So, I found it middle of the road and I think that it is an interesting watch, but slow. I will give it a 5/10.