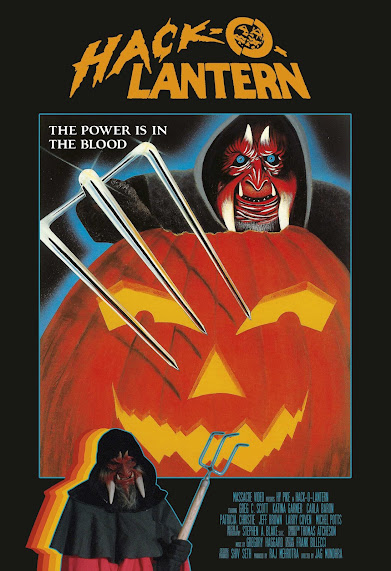 The movie begins with grandpa(Pike) coming to visit his grandson, Tommy(Cummins). He brings him a pumpkin for Halloween and he hands him a pendant. Tommy's mother doesn't like Grandpa visiting her son. Her husband goes to visit grandpa and warn him to stay away but he ends up seeing a cult and grandpa is part of it. Grandpa kills him. Cut to years later and Tommy is all grown up. He still has the pendant. Grandpa is still around and he tells Tommy that he is going to join his cult tonight. Mother is still not happy but there isn't much she can do about it. She tries to reason with grandpa,but he won't change his mind. There is some sort of weird incest vibe between them. 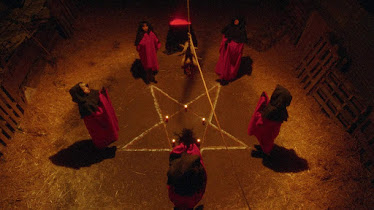 Tommy's sister is Vera(Carla Baron) and his brother is Roger(Jeff Brown), who happens to be a cop. There is a Halloween party on and Vera is going with her friend, Beth(Patricia Christie). Mother tries to talk to Tommy but he is set on joining grandpa's gang. He has some weird dream about being a band with a woman dancing around and shooting lasers. She dances with Tommy and she sticks a pitchfork through him. Roger talks to mother about Tommy. Beth and Roger meet and they like each other. Roger finds Tommy's Satanic lair. Things are getting out of hand here! An unknown killer is on the prowl and they kill Tommy's gal pal. Vera has a boyfriend called Brian and he and Tommy have a run in. The killer chases Brian and he ends up dead. What is going on in this weird place?? 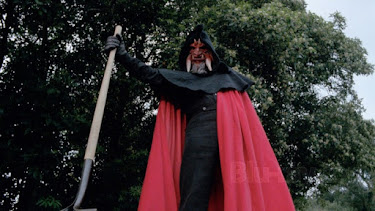 Grandpa and his group have a young girl in their meeting place and they brand her backside with a pentagram. Roger and Beth are getting on really well. Vera and Beth happen to be walking through the cemetery when they come upon Brian's dead body. Vera thinks that Tommy is to blame and she goes looking for him at grandpa's place. She goes there and interrupts the cult's ceremony. Grandpa tells her that she is going to pay for interrupting him. He orders Tommy to kill her, but he won't do it. Grandpa is hopping mad. Vera escapes and gets Beth and they go looking for Roger at the Halloween party. Tommy runs away from grandpa. The killer is at the party and more people die. The cops go to grandpa's barn, but he has hidden all of the cult stuff. 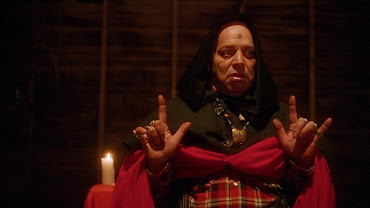 Grandpa shows up at the party and he tries to attack Vera. He is stopped by Roger but he passes his power onto him before he dies. Roger sees the killer and he shoots at them. The killer runs off and goes to the cemetery. It turns out to be mother!!! She is at her husband's grave. Tommy ends up there too and they bond before she dies. The movie ends with Roger becoming the next leader of the cult. What can I say about this film...It was bad. The story was bad, the acting was bad and the ending was bad. I hadn't heard of this one before and I was intrigued by the title, but it did not live up to my expectations at all. It doesn't have enough in it to be a decent Halloween movie. It doesn't have a great story and the kills weren't all that good either. It was just poor overall. Watch at your own peril. I give this a 3/10.