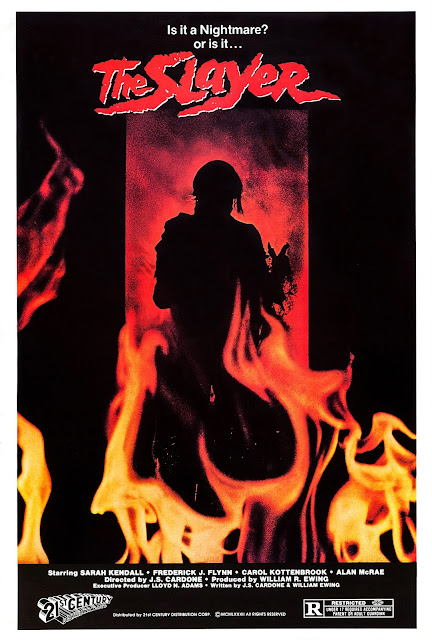 The Slayer is a 1982 horror Movie directed by J.S.Cardone and starring Sarah Kendall, Frederick Flynn and Alan McRae.

The movie begins with a woman called Kay(Kendall) who is having nightmares about a creature. She is having a hard time dealing with the bad nightmares and they are affecting her life. Her husband, David(McRae) wants to take her on a break with Kay's brother Eric(Flynn) and his wife Brooke.
Kay doesn't want to go but they persuade her. They fly over to an island. The pilot warns them that the island is deserted but they don't care. They reach the house and look around. The pilot comes back to warn them about a storm that is coming. He tells them to be careful. David is worried as Kay is acting strangely. He hears a noise downstairs at night. He  looks around and he gets killed. Kay wakes up and finds David beside her. It was just a nightmare. She is worried about him. Eric is annoyed with her. He tells her that David is fine. 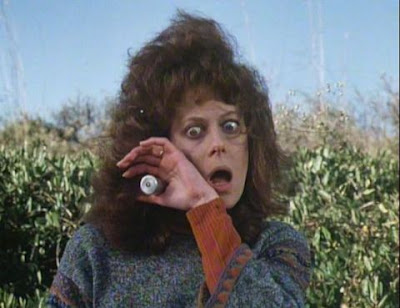 Kay tells him that David is dead. Eric Tells her no. He goes to look for him. Brooke also thinks that something happened to David. She and Eric search for David. Kay finds his body in an old theatre. Eric tells Brooke that Kay was always strange. Kay tells them that she saw the killer in her dream and she thinks that it is a premonition. They give her something to help her sleep. Eric thinks that maybe the pilot could be the killer. He thinks that he never left the island and is wasting to kill them. Eric gets attacked next and when Brooke looks for him, she gets it too. The next day, Kay wakes up and looks for them and finds their dead bodies. She runs to the house and locks herself in. She hears something trying to get in. She shoots at the person and discovers that it was the pilot who was just looking around. The house goes on fire and the creature from her dream shows up and tries to kill her.
We cut to a scene from Kay's childhood where she is telling her parents that she had a nightmare and it turns out that the film was one big nightmare or something like that. It ends with her being given a black cat by her parents. 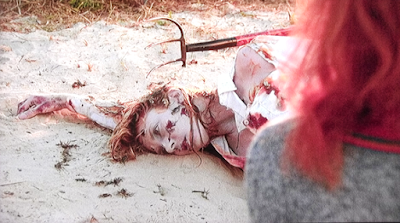 This was a fun movie. I liked it but I did think that the ending was a bit strange. I didn't really feel that it was a good ending but that's a small thing. It is a typical slasher movie and I liked the cast too.
The setting of the island is interesting and the killings are pretty good too. There isn't anything very scary here,but I enjoyed it anyway. I recommend this one if you enjoy 1980's slashers. I give it a 6/10.