No doubt you've been hearing a lot about Myanmar/Burma in the news lately, and I'm grateful. Reports of new economic policies, legal imports of Coca Cola, and political leaders visiting, keep a nation like Myanmar in the headlines, and it's exactly where it needs to be. I'll admit, headlines about distant lands are always a bit bewildering, how could a country NOT have ATMs (actually they just got 1 ATM)? Is there really a war still going on there? Although it may seem like a strange and different land, please absorb it is true. The people of Myanmar need us thinking about them if there's any chance of them coming out ahead. 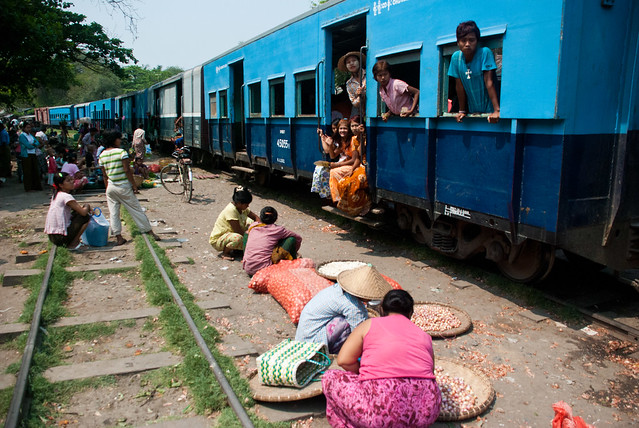 Train cutting through a market in Mandalay. 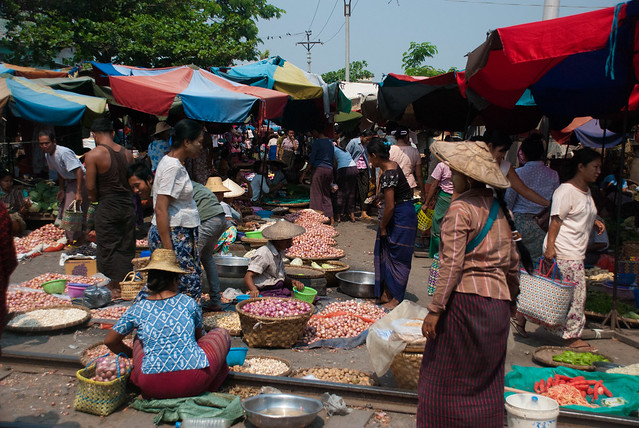 When the train passes, the bustle continues. Market on the train tracks in Mandalay

Why did President Obama go to Myanmar?

The news about President Obama speaking in Yangon this week delighted many of my friends in Yangon, and I followed their Facebook feeds showing their tickets to his speech and photos of the big events. As part of a tour to Thailand & Cambodia, President Obama was the first sitting US president to visit Myanmar. Speculation aside about whether this is too soon for the US to engage so closely with the country, Myanmar is a nation in the middle of a major democratic shift.

As Obama points out in his speech, Myanmar borders the most populated nations in the world, India and China. I see him alluding to a clear US motive: China and India both have major interest in Myanmar and its resources, and the US needs to be strengthen relations before it's too late. This partly explains Secretary Hillary Clinton's and Senators John McCain's and Joe Lieberman's 2011-2012 visits to Myanmar, as well as major leaders from England, Australia, and many other nations. 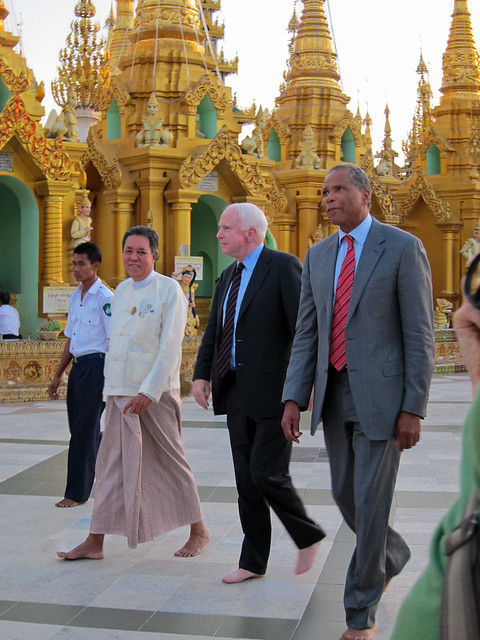 The guaranteed place to see a visiting dignitary? Shwedagon Pagoda where we nearly bumped into
Senator John McCain (above) and Senator Joe Lieberman (below). Jan 2012 (Points if you can pick out Shannon & J of the Got Passports) 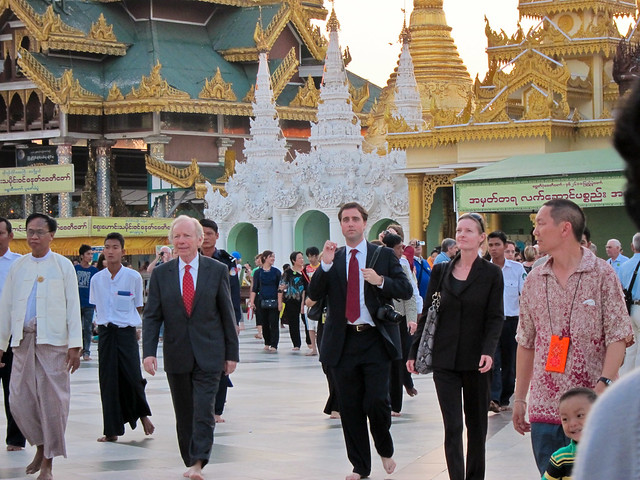 How often do you get to see a powerful Westerner's pale feet?

President Obama going where few foreigners had gone before.

I've been delighted that President Obama went to a city I love dearly, but oddly, what stuck out most to me was a small detail: that he spoke at the University of Yangon - a place foreigners are not allowed. Let that sink in for a moment - it's a public university where foreigners or the general public are not allowed. Imagine most university campuses you've visited with snack shops and students running to class or hanging out under a tree. Oh yea, and the fiery debate going on in classrooms. You or most anyone could walk onto a campus freely picking up a flying or listening to a guest speaker. The opposite is true in Myanmar - the general public is prevented from entering. Centrally located in Yangon, not far from Shwedagon Pagoda or Inya Lake with Daw Suu's home and many foreign Embassies, is this sort of eerie university campus, primarily empty.

I tried to enter once, knowing I wouldn't be allowed. Liking to push boundaries, though I had to try. Unlike most days, I actually saw a few students walking a path through campus, and I thought heck, "changes" are happening, maybe they'll let us in. My smile and request to enter was met by incredulous looks and generous laughs of the university guards. Kyle spoke Burmese to them and requested again. It was like they'd never heard him a funnier joke.


Why are people banned from entering?

President Obama alluded to it during his speech there: the history moments of students "demanding basic human rights" during rallies at the University make this a place that's typically kept under lock and key. Around the country, university students are discouraged from visiting and usually go only 3-4 times a year, studying instead by "distance education" programs that keep students at home instead of gathering together for knowledge, sharing ideas, or worse, repeats of past student rallies for justice. It's a far cry a productive Indian education system inherited from the British, that Myanmar also once benefited from. 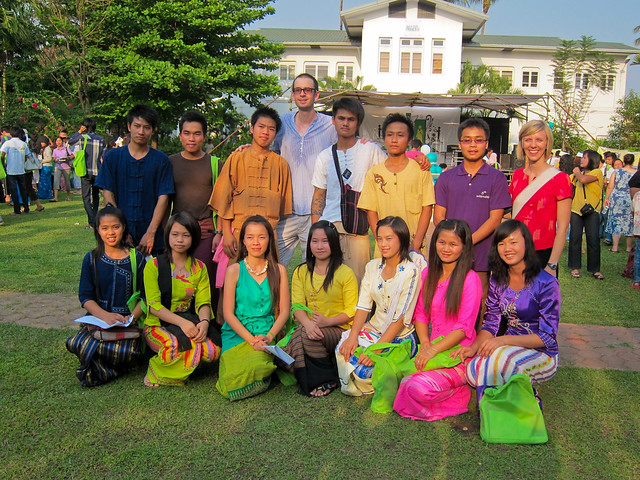 Rather than formal education, hundreds of grassroots education programs exist around Myanmar allowing Myanmar students to get a deeper education. Above, a group of Shan students from a community based school I worked with at the annual Education Carnival at the Alliance Francais, Yangon.

On Monday Nov 19, President Obama took the podium at this ordinarily quiet university and spoke boldy and with vision to Myanmar (full speech). A few sounds bites:

"A dictatorship of 5 decades loosened its grip"..."and now you can see it. You can taste freedom."

"Fear does not have to the be the natural state of life in this country. That's why I'm here. That's why I came to Rangoon"

"No process of reform will succeed without national reconciliation" 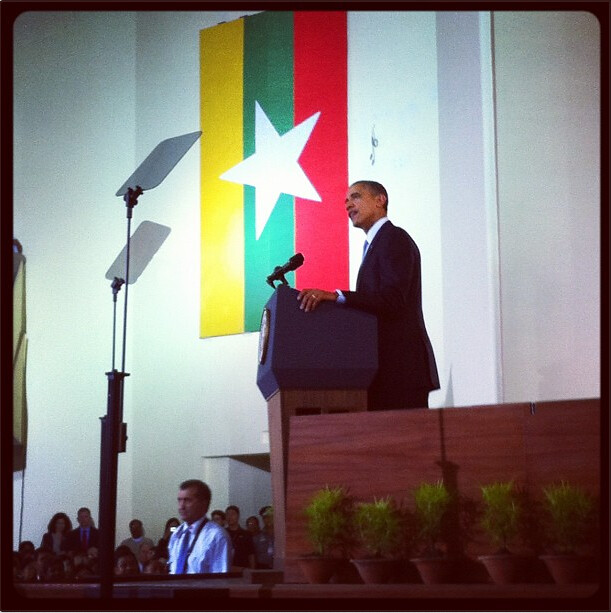 "The future of this country will be determined by the Education of its youth." Photo from the lovely Camille McDorman 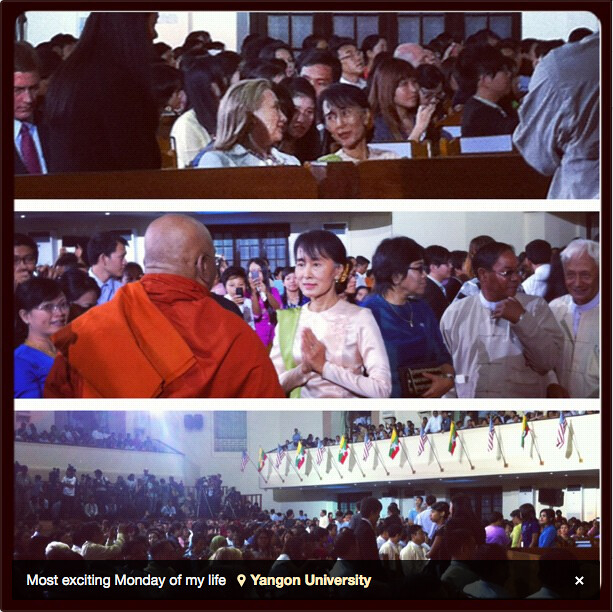 Secretary Clinton and Daw Aung San Suu Kyi at Pres Obama's speech in Yangon. Photo from the lovely Camille McDorman
What I sense from my friends in Myanmar already is empowerment from President Obama's visit. He chose to visit and he chose now. And I believe that resonates to the core of so many of the community leaders and change makers I worked alongside. After decades and decades of extreme actions hindering the work of civil society, finally now does momentum seem so great to no longer squash community efforts to educate, give medical care, provide dignified funerals, prevent human trafficking, prevent HIV/AIDS, unify ethnic groups that historically clash, etc. It's complex to explain why these efforts for years were a struggle, but what's easier to accept is that it has begun to shift, and so significantly that it can't easily be retracted.

Using words like "dictatorship", "democratic elections", and "remembering the poor" Obama was pushing the boundaries of acceptable speech in Myanmar, and these statements were likely very calculated by the Administration and the State Department. These phrases aren't heard openly in Myanmar, and they are extremely significant in a nation like Myanmar, where criticisms of the government are vast, but seldom tolerated. A nation of 50 million where 2% of GDP is spent on health (only North Korea is lower), a similar 2% spent on education, GDP per capita is $379 - a little more than $1/day, and less than 1/100 use the internet, cited here, here, and here.

While I stayed far from these sorts of controversies while in Myanmar, it's exciting to see the tolerance of bold speak tolerated. President Obama isn't the first to push the envelope on issues, I was delighted when Jackie Chan came with the UN for human trafficing, a formerly forbidden topic & significant problem for Myanmar's poor.  This trend will continue next month, when singer Jason Mraz will perform with MTV Exit raising awareness about human trafficking, in the People's Park, ironically named since it's Yangon's largest green space that was closed to the public for decades.

These big names are just the publicly recognizable figures. I've worked with hundreds in Myanmar that helped start this wave of empowerment, many of them going unnoticed. To mention a few: 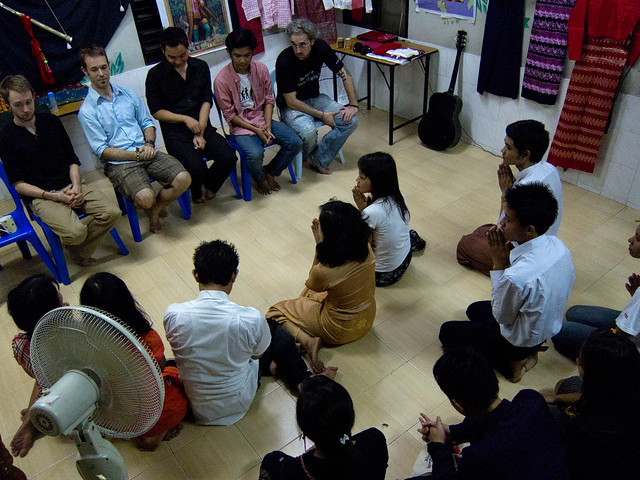 Traditional ceremony of Myanmar students thanking their teachers at the end of term. Was a tremendously humbling experience to watch these young community change makers on their knees praying for and thanking their teachers.
Each of these leaders is worthy of a book to tell the story of the dedication, love and change they bring to their community. And instead of even so much as a mention in a news article, let alone in this blog, they work somewhat anonymously. For so long, it was the only way they could work.

However, if today in 2012 is any indicator for the future, I envision many of those unsung heroes will be acknowledged. Someday, that sort of change will come.

--
Feeling inspired to help? Support two of my amazing friends in starting a study abroad for university aged students to travel to Sri Lanka: Fundraising for Burmese Student Volunteer Program