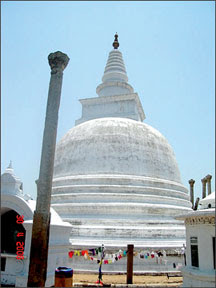 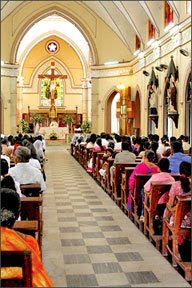 Quote
It is one thing for people of different faiths to work together for the common good while maintaining their religious identity. We could extend our goodwill for the religious activities of the adherents of other religions. Catholics organising Dansalas in church premises for Vesak should be appreciated. But we ought to know where to draw the line.

Once Prince Siddhartha walking on lotus flowers soon after birth was depicted in the premises of a church. In another year a Buddhist Bhikkhu preached Bana for Vesak in a Catholic church. The following year a statue of the Buddha was placed in the same church premises and a pandal was erected. There had been Vesak Bhakthi Gee in church premises as well. In some Catholic churches Vesak lanterns are hung and illuminated.

The church is a place consecrated to God. There is Holy Eucharist in the church and we Catholics firmly believe that God is present there. According to Buddhism, the Buddha is not a God but an enlightened human being. Paying homage to a human being in churches would amount to sacrilege and a big joke as well. Recently celebrating Vesak in churches was criticized in a popular column in a Sinhala Sunday journal.This type of deception would demean Christianity and would arouse the suspicion of intelligent Buddhists. It would confuse the young in their formative years and would mislead the ignorant.

This post first appeared on Sri Lanka Holidays Skanda Pandia Lanka Light And E, please read the originial post: here
People also like
Top 10 trends in 2021 for jewellery in Australia
Former Malta Government Official Becomes Whistleblower—in NFT Form
Best Things to Do in Cadaques, Beautiful Town in Costa Brava
Building a Talent Pool in a Tight Market
Homemade Root Beer Float Popsicles
Rockers The Cold Stares Release New “Heavy Shoes” Video
10 UK destinations that will make you feel like you’re on holiday abroad
“The Friend Who May Not Seem a Friend” – The Cat and the Fire, Post 2 of 3