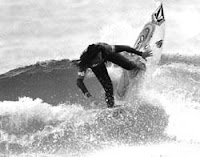 Kauai’s traditional pastime is riding the waves, that includes the North Shore, Hanalei Bay and Po’ipu. But the burning question is can a terminally clumsy person handle a 9 foot
board against tumultuous waters? That said, this uncoordinated person has her work cut out for her. Last June, I took in Sony’s animated feature, “Surf’s Up”, a sparkling visual that pays tribute to Hawaii and the sport of surfing. Walking out of the theater inspired I decided to ride, ‘The Land of Waves’.
The ultimate goal would be to surf at night. An exciting scary thrill. Complete darkness. Finding my way to other senses, for both survival and rapture.
Before I could reach such grounds I found that learning to stand on a board proved to be my initial objective. My travel buddy referred to me as a “low-rent Gidget does Hawaii”. But I was not to be deterred. Where there are impressive waves, they shall gather. The ultimate escape for the active surfer is Kauai. Surfing on the reefs. One with the board their backs to the Pacific’s horizon. Some of them proven and talented. Others ready to soar among the eagles. Generations of surfers have been riding the waves of Kauai. Since the natives first mastered the shores, surfing has become an exhilarating rite of passage. Contemporaries such as Andy Irons, Bruce Irons, Keala Kennely, Laird Hamilton, Sena Seramur, Dustin Barca all contributed to Kauai’s legendary surf community.

Kauai has many surf spots on the islands, most of which remain a secret. The more well-know waves are Hanalei Bay, Cannons and Tunnels. Surfing in Kauai means summer breaks in the south and winter breaks in the north. Generally surfing is best on the North Shore, especially Hanalei Bay, Tunnels or Cannons and the south coast in summer where popular Po’ipu Beach crowds up. Pakalas, near Waimea is the Westside’s hottest break. Transitonal swells happen on the Eastside, when surfers hit Kealia Beach or Wailua Bay behind the Kaoa’a Sands Hotel. Surfing conditions at the Po’ipu beaches are usually gentler than on the other side of the island. But if you’re qualified, you might want to take on challenging North Shore beaches like Hanalei. Keep in mind that conditions can be extremely dangerous during the winter months. Experts only.

Seems simple enough. A wave and a board that’s all you need. My surf instructor, Paul, said that I will stand up on one wave before my first session was over. He mentioned balance and upper body strength for paddle power.
We began on gentle, rolling waves in Po’ipu next to the Marriott Waiohai.
After some struggle, I gained confidence (or too much salt water in my brain) and started to trust my equipment. Paul said so much in catching and riding big waves comes down to confidence and a trusty board.
Paul also pushed me to be aware of where I am. Hold on to the spot when everyone is scrambling.
“Take that extra stroke, girl.” He said, “The thing about big waves is that they do everything to keep you off them. There’s so much water and wind that it’ll flick you off if you don’t give yourself that extra insurance.”
After the session was over, I was already dreaming of sponsorship deals. One day I’ll look down this long vertical face, so long I may not make it all the way, without looking down I may surprise myself as long as I think I can.