We haven’t had an Indian curry since we visited Little India in Penang, Malaysia, we just couldn’t face the disappointment, but after a gripping Sherlock and getting soggy at the cape we thought we’d risk it. A short walk in the evening humidity of the Far North took us to The Copper Pot, where we greeted by a lovely Kiwi woman and 2 Indian chefs. We took our time deliberating over our order, eventually selecting one curry, a Lamb Rogan josh, to share and a few side bits. Well bloody hell it was delicious, we certainly made the right choice, Kyle ate so much he struggled to walk home after, good job he had a comfy bed to fall into.

Life Extension US – Weight Management…
A Guide To Visiting Antigua, Guatemal…
Two AMAZING events at Royal Arsenal R…
Still feeling full and well rested the next morning we took a short drive to Ahipara Beach, located at the Southern most end of 90 mile beach. The weather was lush and it sure felt warm in the car, but as soon as we stepped on to that beach we were almost blown backwards (standard West Coast), still we had a nice walk and Kyle had a laugh drawing rude pictures in the sand. We saw a few cars making their journey towards the end of the beach, though we didn’t risk it ourselves we’d heard enough horror stories about tourists getting stuck. Don’t tell Eric but I don’t think that he would of quite made it either. Further round the beach is Shipwreck Bay, here a coral break provides the perfect surf in the bright blue waters, shame Kyle hadn’t rented a board from further up the beach, hey? 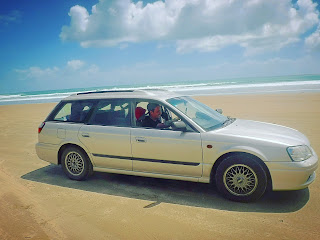 The sea turns into a river which leads back towards the town, at a bridge over the river on our way back we spotted some local children jumping off into the cold waters below…though it was hot in the car I don’t think there was anyway I would of joined them, even if you could see clearly through the water.
Our second Air B&B turned out to be a great choice, Sarah and Neil are the perfect hosts with a lovely home. We spent a good few hours discussing England (Sarah’s originally from the UK and Neil lived there for 8 years) and NZ. Sorry guys at home but NZ came up top on a lot of points. We even got to play with their black lab, Jeffery, so my night was made!
Finally a short drive day, it took us a little over half an hour to get from Kaitaia to Doubtless Bay and our next campsite, Hihi Bay Holiday Park. The journey took us right round the bay and allowed for glimpses of all the beaches on offer….it’s just a shame that the weather was shit. We were hoping it would brighten up once we’d pitched the tent but it didn’t, still we found time to walk round Hihi, along the beach and to the other side of the bay. As per all of New Zealand the sea is bright blue, the beaches clean and all surrounded by lush green forests. We even enjoyed a spot of holiday home dreaming before returning to the campsite and watching Toy Story.
We’ve experienced 4 seasons in one day in New Zealand on a few occasions, but we’ve never had a storm quite like the one we experienced on our first night in Hihi. It reminded me of the ones we had back in Bangkok, Thailand. So bad that we made the decision quite early on to move into the car, we didn’t think our little tent would survive the night (surprisingly it did). The wind and rain did not give up, hitting the car from all angles it felt as though the wind was everywhere. The trees cast creepy shadows on the car, leaves and twigs bounced off the roof, thunder boomed loudly in the distance and the lightening lit up the sky. Kyle was blissfully asleep during most of this, until around 3am at least, that was when I rudely woke him, busting for a wee….I don’t know what I thought that was going to achieve, it’s not like he was going to come with me. So in my little PJ shorts and Kyle’s waterproof jacket I made a run for it, I should of just wet myself, I was soaked by the time I got back in the car, even more so thanks to the dodgy zipper on Kyles jacket.
We were shocked when we woke the next morning at 10.30am, but after wee gate we were awake for ages, getting rocked around and sweating in the car. It took us ages to finally move, take a shower and get dressed and we were so tired only one thing could save us, a big fat fry up! To get one we had to drive 6kms to Mangonui, as there’s little more than a campsite and an essentials only shop in Hihi. Mangonui is a small town, filled mainly with heritage buildings which line a small harbour and boardwalk, so after we’d filled our bellies with at least a quarter of a pig we decided to have a small stroll and enjoy the fact that the wind did not reach this bay. The buildings have all been well maintained and walking along the boardwalk you feel as though you have stepped back in time, all they need are a few people in costume, we got to see an old memorial hall, courthouse and a church before stumbling into a local market. Here people were selling their handmade goods, jewellery, jams and beautiful art work made from paua shells. The last part of the walk took us up a small hill overlooking the harbour and it’s 3 entry points, again we were taken aback by the waters colour and surrounding mountains…some views never get old. 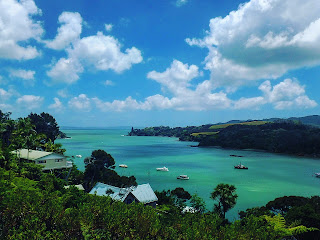 I fell victim to the “walking on your phone curse”, it was highly embarrassing and I wish I’d learnt a lesson but the truth is I’ll probably do it again. But after a lovely day of walking, I managed to fall down the steps out of the toilet and twist my ankle, it was so painful I thought I was going to pass out. I can’t thank the German girl that was there enough for rushing to get Kyle, some ice for my ankle and wet tissue for my knee…between her, Kyle and the campsite owner I was well looked after, even if i have been left with a fat foot, a limp and a cut on my knee like a 5 year old.
After watching some moron attempt to blowdry his bald head and beard we made our journey to the Bay of Islands and our first stop off point, Paihia. We settled in at Waitangi holiday park, I say settled in, what I mean is we picked a good spot for parking the car, the tent died a slow and painful death in the storms of Hihi and headed for Paihia beach. Paihia reminds me of a holiday resort, there’s not much there besides over priced tat shops, motels, resorts and holiday rentals…still the beach was covered in soft, golden sand, the sea was cold and blue and the views of the little islands were pretty spectacular. I really wanted to hire a paddleboard to experience a little slice of island life one again, but Kyle wasn’t up for doing all the paddling, and I was still pretty beaten up from my fall. It’s a shame that Paihia has so many hostels, a few of which seem to attract the young teens that think they’re on a trashy European holiday. Large groups started to form and the hostel staff brought down a volleyball net and other beach games, awakening the rowdy crowds and making us and many others move on pretty swiftly.
Exercise is good for my ankle according to Kyle, so after lunch we took a walk along the beach front watching birds dive into the ocean and swim under the water for ages, emerging with a snapper for supper, much to the annoyance of the fishermen on the bridge. The wooden bridge took us into Waitangi, where we were hoping to visit the treaty grounds, famed for being the site where the Treaty of Waitangi was signed between Maori chiefs and the British Crown which then established British sovereignty or something like that. Anyway, the grounds were shut so we didn’t get to see what was inside, and we didn’t plan on going back, at $40 per person we thought it was a little expensive to see some land and get a history lesson…though I am sure a lot of people would enjoy it.
On our way out of Paihia we went to Haruru Falls, where we were hoping to spend the morning, unfortunately when we arrived we realised that the falls weren’t so much a swimming hole but more of a scenic view. Still the falls were beautiful, not too high but very wide and surrounded by trees and bush. I imagine they would be even bigger if the Northland had seen a little more rain, but as it stands they’re suffering with a water shortage. It’s a shame we didn’t get to do the 2 hour walk to the falls through the bush and over the rivers, it was our original plan but I ruined it…sorry about me, it’s on our list of to do’s for next time. 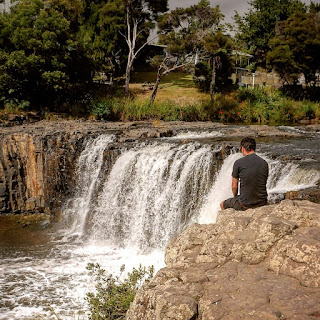 Driving towards our next stop Te Arai took us along the beautiful coast of Waipu, with a surf beach and a cove, perfect for sunbathing, I was shocked at how quiet these beaches appeared, combined with the 30 degree heat it looked like the perfect holiday destination to me. Our beach of choice was Mangawhai heads, and it was a bloody good one at that, a steep path leads you to white sand and turquoise waters, a perfect beach surrounded by sand dunes and limestone formations, we managed to while away a good couple of hours and Kyle even got me in the sea, to my waist at least.
We’ve chosen to settle in Te Arai for our last week before heading on down to Auckland to sell the car, that's right we've got to say goodbye to big old Eric. It’s seems the perfect little spot with plenty of beaches and not too many tourists, plus it’s close to a few other towns and sights. So if you’re the jealous kind, be prepared for a post about a huge beach week next…..
Love Carrie xxx


This post first appeared on A Guy, A Girl And The World, please read the originial post: here
People also like
Life Extension US – Weight Management Supplements Flash Sale
A Guide To Visiting Antigua, Guatemala: The Best 5 Things To Do And See
Two AMAZING events at Royal Arsenal Riverside and Kidbrooke Village this Platinum Jubilee bank holiday weekend!

Subscribe to A Guy, A Girl And The World