Our songthaw ride to the harbour was actually ridiculous due to two of the couples that joined us on it. They were quite clearly on a 2 week holiday, the girls had their nails done and stupidly long eyelash extensions, but what was really annoying was the 8 suitcases and 4 handbags that they had between them, they were fucking huge and took up all the room. Kyle, myself and another couple just looked at them as if it was a joke, we all had a backpack and a mini bag each! I mean what are these people bringing with them? Their families? Pets? Sinks? Cars? They need to get a grip, swimwear does not take up that much room!

Driving a Car Christian Dream Meaning
It’s Me – Chapter 12
The Trick to Always Looking Sexy for …
How to Develop an Educational App?
Wealthy Affiliate Scam or Not
This time our boat was a tiny 28 seater, Kyle loved the journey as, and I quote, “The boat catches loads of air man”. This resulted in us being slammed about like baby kangaroos in their mums pouches for 20 minutes and it was hot, tarts are us with their 8 suitcases shut the windows…this pissed me off even more! Selfish bastards. Once we arrived though we were ferried off in our private car to Ubud. The drive was brilliant, there is so much to see on this journey from temples to art shops, antique stores, crafts and metal work. You could come here and buy loads of stuff for your house, though once you’d shipped it all home and had a look at it in your front room I don’t think many would find that aluminium horses or wooden fish would suit their front rooms.
The driver dropped us off in the centre, no where near our guesthouse but conveniently close to a “taxi” stand, which left us with no other option but to be ripped off for the next part of the journey (no normal taxis came by for ages). So 100,000 rupiah and 3km later we arrived at our new home, Sakha house, a cute little homestay just outside the centre of Ubud. After a quick shower and change we went for a little wander and had a look around the arts and crafts shops, this resulted in a new necklace for Kyle and a customised mini surfboard for us both (which I’m sure right now will look good in our bathroom, but I won’t find out until we’re home). Everyone we encountered said hello, the air was cooler and there was a nice relaxed feel, we could tell straight away that we were going to like it here.
For tea we ventured to a local warung for Babi Guling or in English suckling pig. Babi Guling is a whole roasted pig served to you on one plate in many different ways. We were offered rice, ribs, spicy meat, mixed meat and chilli with 3 types of crackling, it was delicious and cost less than two pound per person. Probably both better and cheaper than a Yorkshire Hog Roast! 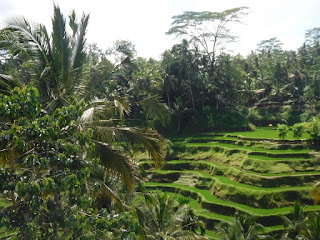 We woke early the next day to try and beat the heat and Walk round the rice paddies. Unfortunately, we took a wrong turn on the moped so a half hour drive turned into an hour, this meant we arrived at 11am and it was bloody boiling! The rice terraces were amazing though, lush greens scattered up the hills and surrounded by the jungle trees. We did attempt to walk round but I’d decided to wear sandals and slipped in a massive muddy puddle so got in a mood for the rest of the morning. I don’t think Kyle minded too much though as he was sweating buckets. Our next stop was the Lawak coffee plantation, here twenty farmers work over two hectares allowing Lawak’s too eat their coffee beans, and later collecting them from dried poop. Once dried and shelled these beans are roasted, ground and sold for 50,000 rupiah per cup. A lovely guide walked us round the plantation, allowing us to taste, roast and grind the beans, before sampling the different coffees which they had on offer, the whole day reminded me of working back at Nespresso and sampling a Limited Edition blend. We did fork out for 2 cups of Lawak but neither of us really enjoyed it, we’re still holding out for another Vietnamese cup I think. Our last port of call for the day was Ubud central market. You could quite easily get lost in there, it is filled with art. clothing, jewellery and food stalls, tied in with beautiful buildings, shrines and ladies selling hand fans from baskets on their heads. We managed to restrain ourselves and left only with a bag of bananas and lychees.
It was another local meal at Run’s Warung, ribs and rice enjoyed sat on floor cushions before an early night and a 5.45am rise. Kyle had decided that he wanted to do the Campuhan Ridge Walk. In my head I thought it would be like a little adventure with loads to see and bamboo bridges to cross. Though it did start well with a bridge over the river and a temple in a jungle, I found myself a little bored 10 minutes in. We were literally walking on a concrete path with the jungle at one side and hotels at the other, once you near the end it just turned into posh resorts and art shops. Safe to say we had a little row when I wouldn’t go any further and Kyle wanted to look at more hotels we couldn’t afford, this resulted in us walking back separately and everyone we passed getting annoyed as they had to say morning twice. I imagine it would be a nice place to catch the sun rise or enjoy a morning jog…if you’re into that kind of thing of course.
Don’t worry yourselves though, we soon made up over breakfast of omelettes when I told him that I’d booked us in for a couples massage. I’d even been brave this time and gone for a 1 hour, full body, Balinese traditional massage….and I’ll tell you what I won’t be doing it again! Kyle really enjoyed his, but I once again couldn’t relax. I don’t know if its coz my pants were around my ankles so my arse got a full airing, or if it’s because my nipples were in the air when she flipped me on my back. Plus the head massage was so hard I had headache for about 4 hours after. But I’ll give the girl some credit, my back and legs do feel amazing so it was worth the 60 minutes of torture and at a value price of four pounds each, I think we got a bargain.
For tea that evening we visited Fair Warung Bale, a decision made on the fact that eating here allows something to be given back to the local communities. The Fair Future Foundation works to provide free health care and home visits to the local villages in Bali and are currently working towards building a new hospital. Eating one delicious meal contributes to two consultations, and it was great to see that the restaurant was packed meaning many people would get the care they needed. We also learnt that normally a reservation is needed as it gets so busy, it’s no wonder that 70% of the charities takings comes from the restaurant alone. 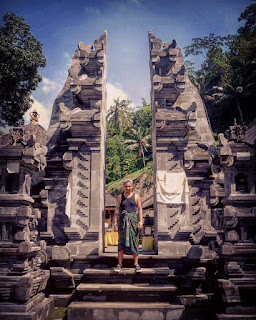 Today we chartered a car to take us to some temples, with it being our last stop in Asia we figured that we would end how we began. Our first stop of the day was Goa Gajah, or elephant cave, is a large temple set on the side of the cliff. Whilst there are no elephants here, the cave entrance has been carved to look like a demons mouth and inside you can see the remains of the symbol of a Hindu god. There are also two square pools contains holy water, a lily pond and a Buddha temple. We were lucky enough to witness many people praying and bringing their offerings to the gods, both adults and children. The smells of incense reminded me of those temples back in China and Japan.
Next we headed to Gunung Kawi, set at the bottom of a valley we had to walk down many steps to reach the ten shrines carved into the walls, resembling a mini Petra, Jordan. It was truly beautiful with a river running through the middle, the jungle lining one side and rice fields along the other. We took our time walking around here, and enjoyed seeing the waterfalls of mountain water pouring into the river below. Though the walk back to the car was hot and sweaty, once again it looked as though Kyle had taken a bath in the pools below.
I was really looking forward to our next stop, Penglipuran village, here you get a real taste of Indonesian life. You are free to walk amongst the locals and their homes, we witnessed them praying, carving, playing and carrying heavy loads on their head from home to home. It was brilliant and everyone was so friendly and welcoming. We got invited into an old mans home, here we saw many of his family members in their out buildings, his 1000 caged roosters and his grandchildren running around. What I’ve noticed in Indonesia is that the elder generation are some of the Oldest which we have seen throughout Asia, I wonder what’s in the water. It was a great afternoon, and we even took a refreshing walk in the bamboo forest surrounding the village.
Our final stop was supposed to be Besakih Temple, however you cannot enter without a guide and a guide costs between $30-50 so we passed on that having already paid $35 for the car. Instead we visited Tirta Empul, famous for the holy water pools inside. Annoyingly these pools were all filled with screaming Westerners jumping on the band wagon, I felt sorry for the people who were actually there to pray. Once inside the temple I was overwhelmed by the feeling of community, the woman were gathered making offerings and baskets, whilst the men chopped and carved bamboo. The air was filled with sounds of chatter and laughter, it was lovely.
What was great about all the temples was the fact that they provided you with free sarongs, unlike many other countries where you have to pay to hire, and they were actually pretty snazzy too. That’s a top tip if you visit by the way, as all the stall owners will tell you that you have to buy one or you cannot enter. Oh and girls, you are also forbidden to enter the temples if it’s your time of the month too.
It was a fantastic last day in Ubud, this city has become one of our favourite places in Indonesia though we have spent far too much money on all our little adventures! Tomorrow we will catch my first ever Uber back to the beach and Seminyak. Kyle is hoping for surf and I’m looking forward to some sun.
Love Carrie xxx

Subscribe to A Guy, A Girl And The World