In a continent that literally survives on chunks of meat, being a Vegetarian traveller is a daring thing to do. Don't get us wrong! It is not really impossible to live off your days solely on vegetables in Europe, rather it is more of an inconvenience when you are hoping for an indulging food experience but all you get is limited feed options. The best way to overcome this crisis? Do the research and broaden your knowledge so that when you hit the place, you know exactly where to look at to get the best delicacies around and that too without including any of those dead meat on your platter!

To save you from further legwork, here is a list of places that serve some of the best European vegetarian dishes you will love nibbling on!

Inver park house & Inver caravan park
طريقة اوراك الدجاج المشوية والمحشية
Everybody wants me, so when do I self…
Ultimate Guide to CBD Edibles 2020
Artists “We Make Carpets” 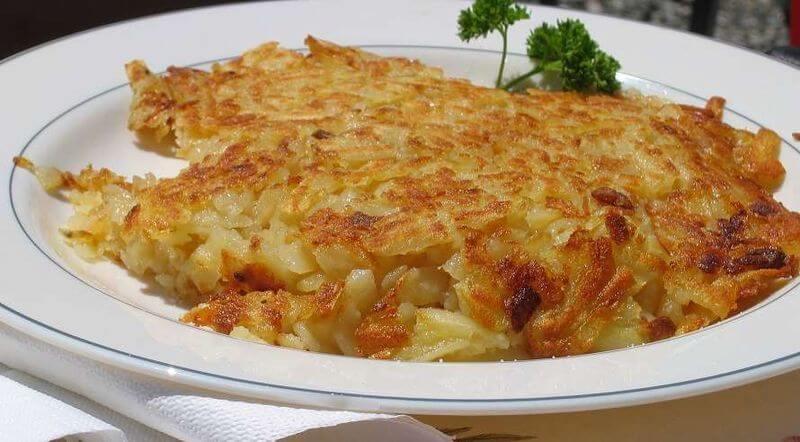 Switzerland is probably one of the best places to land in if you are vegetarian and moreover, a vegetarian on a food detour. Come here and you will realise many of their delicacies revolve around the vegetarian elements comprised of potato, cheese, herbs and bread, providing a leeway to those who wish to avoid meat. Potato Rosti is one of them. The lovely fried dish is made up of grated potatoes simmered with cheese and butter and sided with fruits and eggs (if you want to add it). You can also try out other popular dishes like Cheese Fondue - a heavenly mix of cheese and bread, Raclette and Alpine Macaroni. 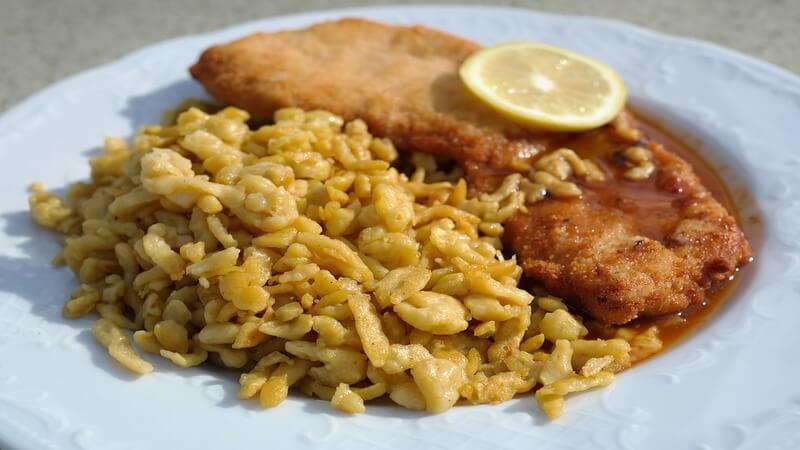 Home to many juicy and flavourful dishes like currywurst, Schnitzels and Dner Kebabs, German cuisine also extends to an interestingly different alternative consisting of more vegetable oriented variants like dumplings, Falafel wraps, crunchy thinly layered pizzas and desserts both with egg and egg free. If you have a sweet tooth, you will have a hard time deciding on your choice here.

Among all, Sptzle can be a great choice to start with, given that not only it is popular but a wholesome vegetarian meal too. A pasta-like dish with doughed base and cheese (lots of it!). The coffee and cake, another duo that holds a great significance for folks and can be best observed in the morning in one of those petite cafes. The southern city of Germany, Tbingen is known for dumplings so ensure to drop by here on your visit. 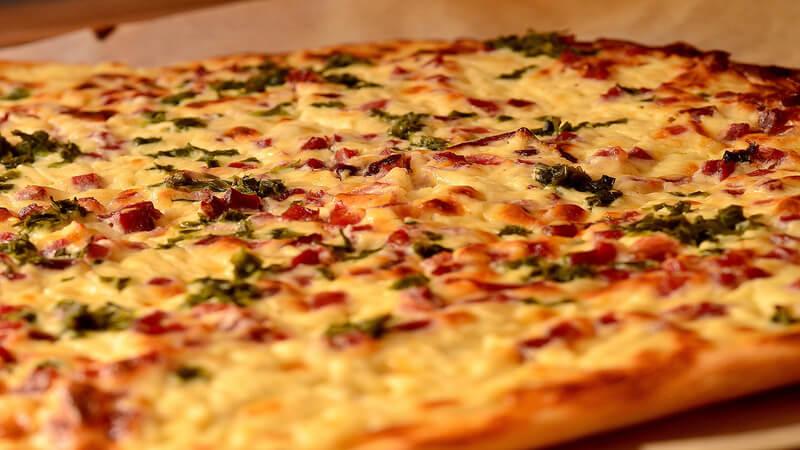 Although finding nice vegetarian restaurants in France can be a daunting task, a little effort in this regard will reward you with amazing results. The epic culinary destination has many flavours to its name, all attributing its multi-dimensional cuisine spread throughout the regions.

The majority of vegetarian dishes here, of course, goes back to the old and tested ones like crepes, baguettes, and quinoa burgers. Yet there are some that are always loved and served such as Flammkuchen. Known to be the speciality of Alsace, this South German dish is like a thinly spread pizza with a crunchy edge to it. The creme Fraiche rectangle crust is loaded with onions and lardons to give it a spicy twist 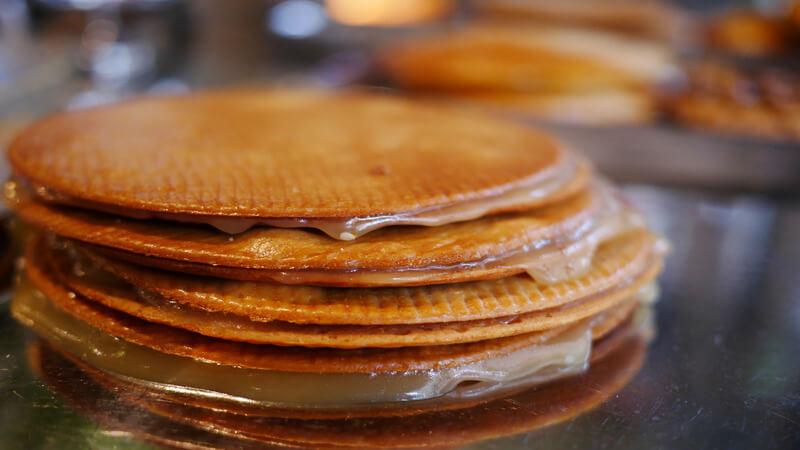 Vegetarian, non-vegetarians or vegans, Netherlands is one place that caters to all and quite happily so! In fact, the fast food options available is so enormous here that backpackers would happily find themselves trotting through streets tasting them all. If you are looking for the best in Netherlands, then a quick bite into stroopwafels is a must! The heavenly caramel filled waffles with its slightly crunchy exteriors and creamy melting texture will just blow your mind.

Not much into sweets? Then go for the spicy crunchy options like krokets and Dutch fries. Bringing a multitude of culture together, you can easily get a whiff of Middle Eastern Flavours and the restaurants around, many of which are veggie focused and will suit you perfectly! 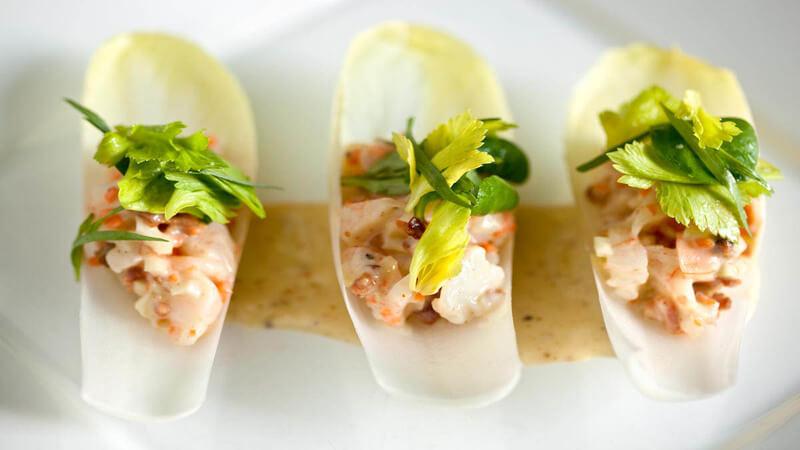 Influenced by many of its neighbours, the Belgian cuisine, might I add, is quite hard to define. While vegetarian food is not that easily available here, go to the metropolis like Brussels and you will get plenty of delectable substitutes to nosh on and enjoy.

Among all, delicacies like frites and stuffed endive spears are great for light-hearted meals. Don't get us wrong, Frites in Brussels are not your normal fries. They are a piece of goodness, uniquely made and sold by French-speaking natives on stalls dotting nearly every street of the city.

Stuffed Endive Spears is another of its delicacy that taste best as an evening meal enjoyed with family. The finger food comes with endive leaves topped with savoury yoghurt cheese and has a refreshing zest to it to making your meal more fulfilling. 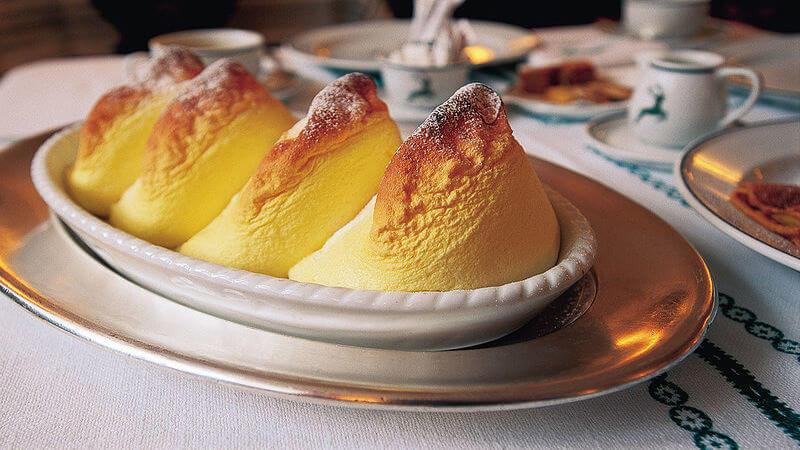 Austria may not be the first place to strike your mind while looking out for engaging vegetarian delicacies in Europe, but it doesn't change the fact that the land has plentiful of influence in the culinary world. Known for its expertise in desserts, it is easily possible to dig into loads of dumplings, strudels and cakes whenever you are out. Not to forget, the mouth watering Salzburger Nockerl which is no less of a speciality here. The Smooth Souffle is not only tempting to look at (with its curved creamy texture) but is definitely a delight to feast on after a dinner. Its creamy yellowish colour topped with chocolate will certainly remind you of the beautiful Salzburg mountains of the region.

If you are looking for something heavy, you can always go for the typical ones like Kaiserschmarrn (petite pancakes) and Ksesptzle (a variation of mac and cheese). 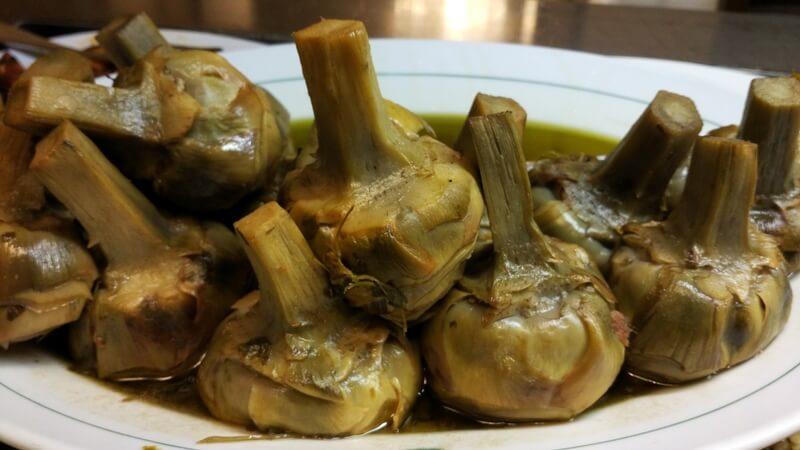 Of course, if there is one place that has all the things to make it a standard of food variety in Europe, it has to be Italy. Pasta, Pizzas, Lasagna to Risotto and Ravioli, all these dishes, at some point, have made into every foodies 'check it out' regardless of their country or region. With most of the food being dough based, vegetarians will certainly have no problems relishing the best that Italy has to offer and that too without a worry.

Comfort foods like Pizzoccheri are also quite popular here. But, if you wish to know what being a true Italian means? Delve into some of those delicious Carciofi Alla Giudia (Jewish Fried Artichoke) found in small restaurants throughout the city. The fried dish is mainly consisted of artichoke leaves, eggs and milk and has a nutty texture to it. 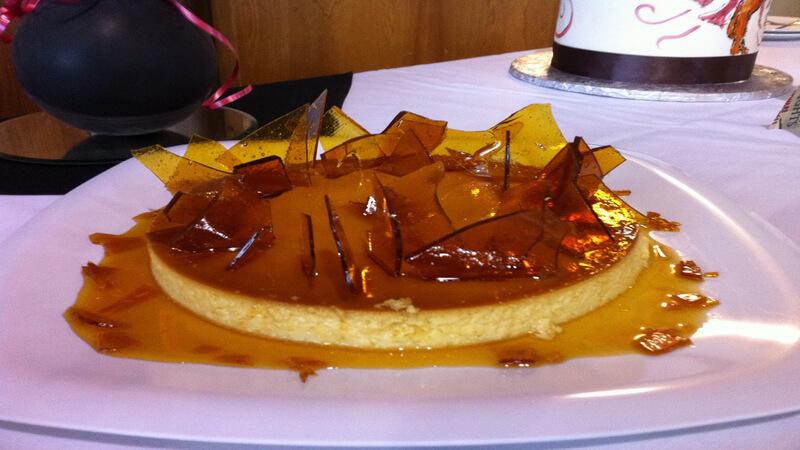 Its easy being vegetarian in the Azores In fact, the number one restaurant on the main island of Sao Miguel offers nothing but vegetarian dishes! You can go for Migas, especially the regional Ribatejan dish that you will find in Lisbon in restaurants that serve dishes from Ribatejo. But the whole country has different types of Migas all worth trying. The dish is made of breadcrumbs of country-bread type. Its delicious when mixed with salad and fills up for a perfectly nutritious meal. Couple it with Flan which is a creamy custard baked with a caramel sauce and you have a perfect Portuguese recipe to entertain you! 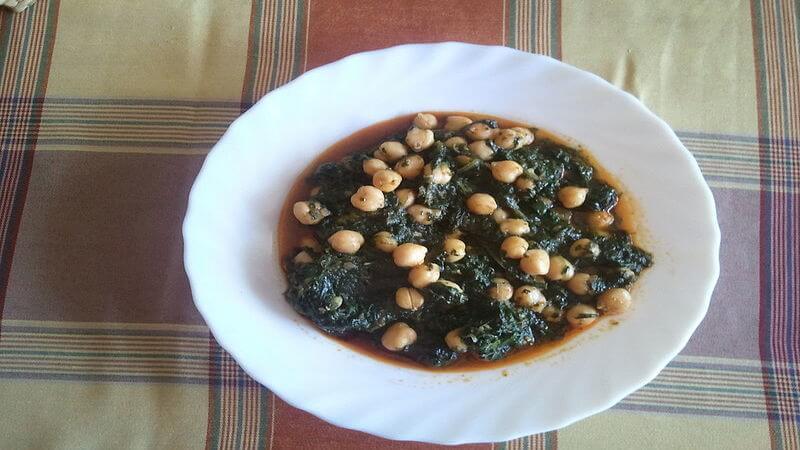 If you have been to Spain, you will know that Spanish Cuisine is much more than Paella and Tortillas. While is Paella traditionally contains seafood, there are some restaurants in Barcelona serving a vegetarian version. You will find a lot of olives, anchovies, some cheese, romesco sauce in the cuisine. You can taste different types of olive oil, have vermouth at 1 pm like many locals, relish the cremat and enjoy a glass or two of Cava. When in Barcelona you must try any and all of the tapas you can get your hands on.

Ensure to have a taste of Espinacas Con Garbanzos. Believe it or not, the simple spinach and chickpea soup is a true Spanish food masterpiece. It does not need much time, nor many ingredients (with garlic, onions and cumin), yet the dish is tasty enough to leave you speechless for a while. 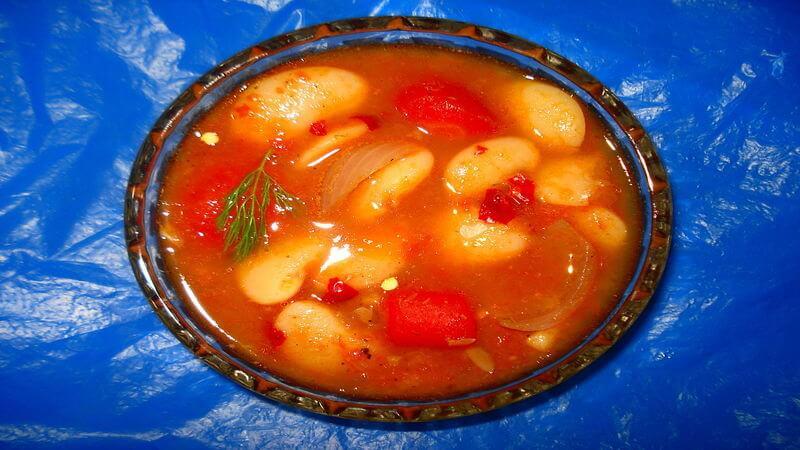 Traditionally when eating out in Greece, people get together and have a meze, a selection of small dishes which the whole table shares, most of these will typically be vegetarian. Often favourites include Dakos salad, beetroot salad, hummus, fava (a chick pea dip with onion and capers), vegetable fritters made with chickpeas or zucchini, and spanakorizo. The spinach and rice dish is among the top favoured and often served to the guests in traditional Greek families, Then theres the savoury pastries and baked cheese dishes along with some other dishes like horta and Fassolatha. 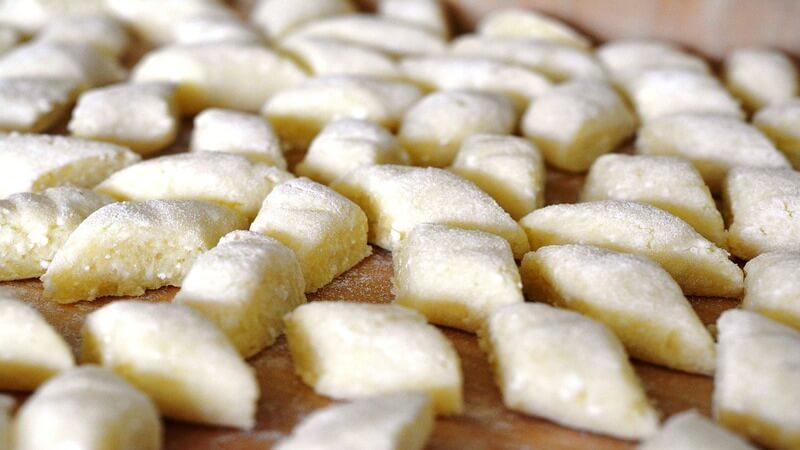 Polish cuisine is more known for being inclined towards sober form and usually does not contain a lot of ingredients. The range though is vast with potato being the base of all. You can easily find potato dumplings and pancakes adorning the shops.

Kopytka is one such delicacy, made from shredded raw potatoes, some onion, a dash of garlic and fried until golden brown. They were usually served either bare or with cream (oh, do spoil yourself just once). By the way, kopytka means tiny little trotters. Enjoy. Sometimes you can mix them with quark and serve with sugar and cinnamon. There are also sour pancakes, filled with cabbage and mushrooms, folded and covered in egg and breadcrumbs, and then fried krokiety. 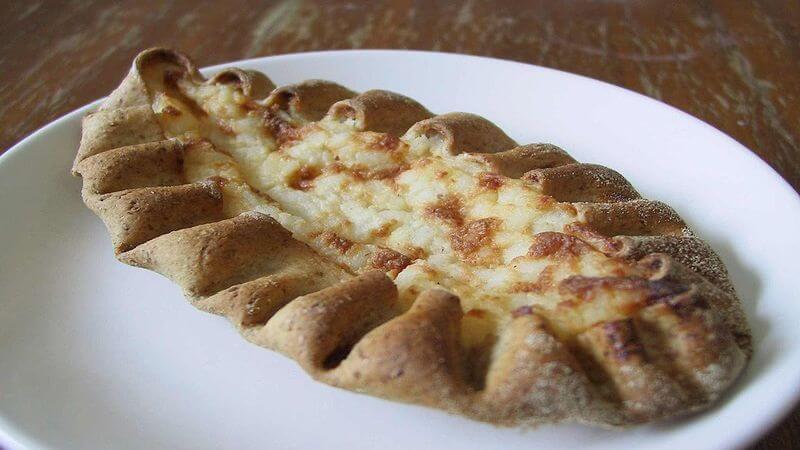 Visit Sweden and you will get the best variations of salads every day! Fresh ingredients along with different cheese and vegetables make Swedish dishes a charming solution for hunger. You can easily get them all over town at various shops and with varying ingredients. Go for a rice and carrot filling one or one with mashed sweet potato, rice and butter, the pie will surely make you crave for more.

So you see? A little research is all you need to enjoy a happening European trip even if you are a vegetarian. Now that you know about the varied flavours in Europe, just decide from the list and set out to explore! 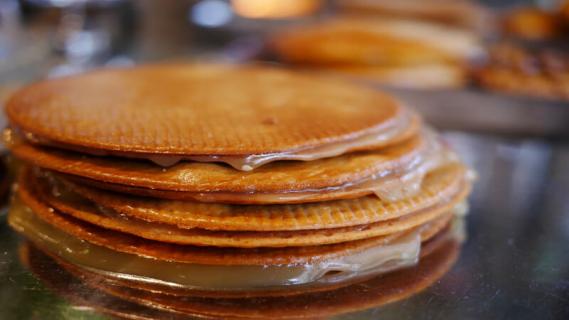