20 Offbeat Places in India to Explore this 2017

When all the tried and tested holiday options seem boring, why not do something different in 2017. There are so many unexplored destinations in a diverse country like India. Going off the beaten path is sometimes the best way to holiday. Check out our list of 20 offbeat places in India worth exploring this 2017. 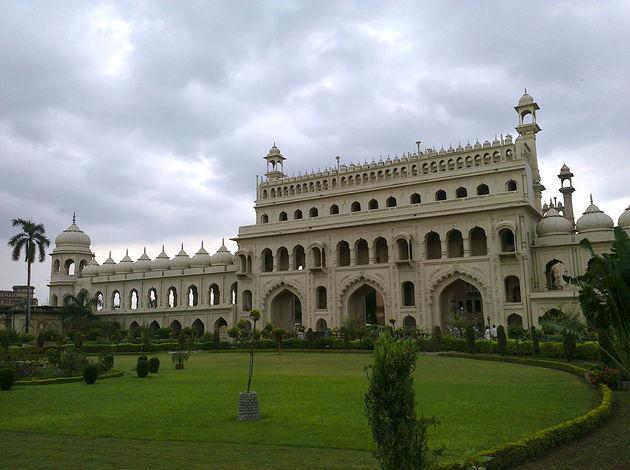 Bara Imambara literally means Big Shrine. It was built by Asaf-Ud-Daula, the Nawab of Awadh, in 1784. It is a beautiful example of Mughal architecture with high sealings and ornate arches. The central chamber contains the tomb of Asaf-Ud-Daula himself. Most people head to Agra for the Taj Mahal or Visit the many palaces of Rajasthan, here is an opportunity to see another magnificent monument from the Mughal Era. 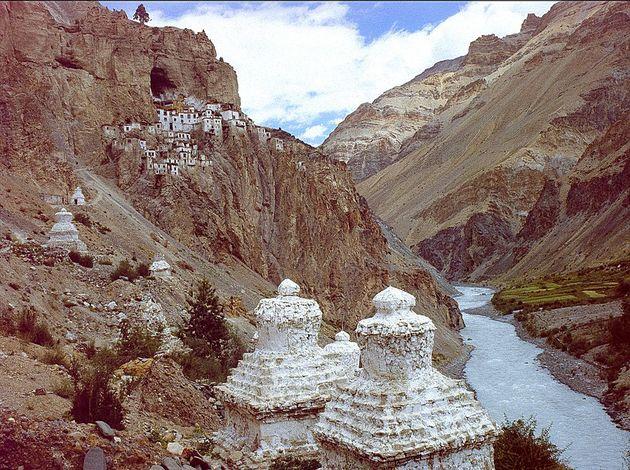 Also known as Phugtal Gompa, this Buddhist monastery is quite remote and in Located in Zanskar, Ladakh. Accessible only on foot, most people visiting Leh or Ladakh tend to give it a miss, but the trek is well worth it. The monastery is built within a natural cave and provides peace and solitude to the monks that live there. There are several festivals that take place here throughout the year and it might be a good idea to visit then. 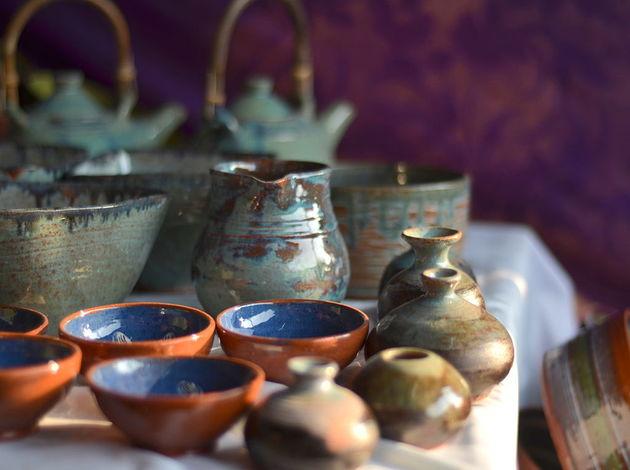 Andretta is a small artisits colony located about 20 minutes from Palampur in Himachal Pradesh. It is also close to the popular tourist destination, Bir-Billing.
An offbeat place, this village was set up by an Irish actress, Norah Richards in 1924. Over the years the place has been visited by many notable artists and artisans. The pottery that is created here is extremely beautiful and sold in markets around the country. In recent times it has gained popularity with tourists and there are some homestays in the locality to accommodate them. 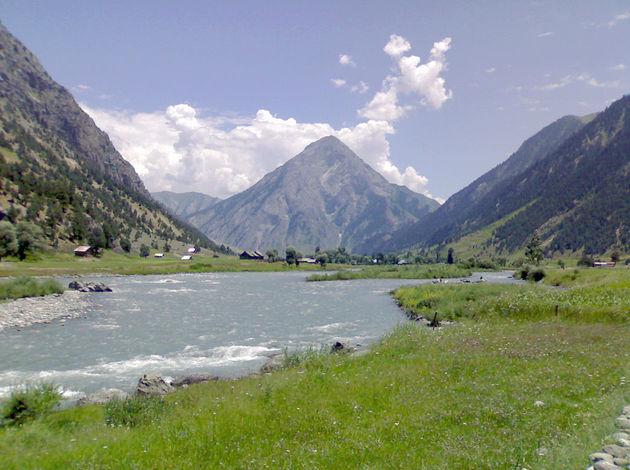 Also spelled Gurais or Gorai, this is a small valley nestled in the Himalayas. It is located 123km from Srinagar and is surrounded by snow-capped mountains. The scenic beauty of the locale is enhanced by the diverse flora and fauna here. The Himalayan brown bear and the snow leopard can both be spotted here. The most notable site here is the Habba Khatoon, a pyramid-shaped peak that towers over the valley. Locals have many interesting legends and stories about the formidable mountain.

The Tharon Cave is located in the Tamenglong district of Manipur and is a popular tourist attraction in the area. However, very few people are aware of its existence which makes it a avery offbeat place in India. The cave itself is 900 meters above sea level and 655.6 meters in length. During the Manipur tourism festival, there are expeditions held for three weeks to explore the cave. The most interesting feature here is that the entire map of the cave is carved on the entrance stone. 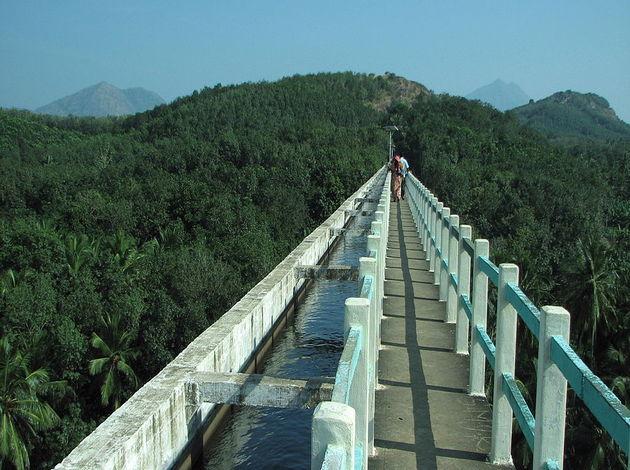 Also known as Mathur Aqueduct, the bridge is built across Pahrali River in Kanyakumari. It is one of the highest and longest aqueducts in the region of South Asia and is supported by 28 huge pillars. In recent times it has gained some tourist interest as the views from the bridge are spectacular. From here, one can see the lush greenery of the rolling Western Ghats and the tranquil river flowing below. 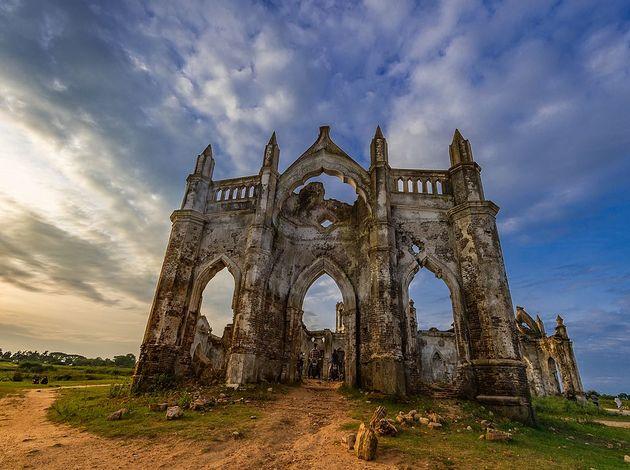 Built in the 1860s by French missionaries, the church was abandoned in 1960. It is a truly magnificent example of Gothic Architecture and a definite must visit offbeat destination. The church is best seen at two times in a year, during the monsoon season the church gets partially submerged and it is a truly visual delight for photographers and tourists alike. In the dry months, you can explore the ruins and see the remnants of this architectural beauty. 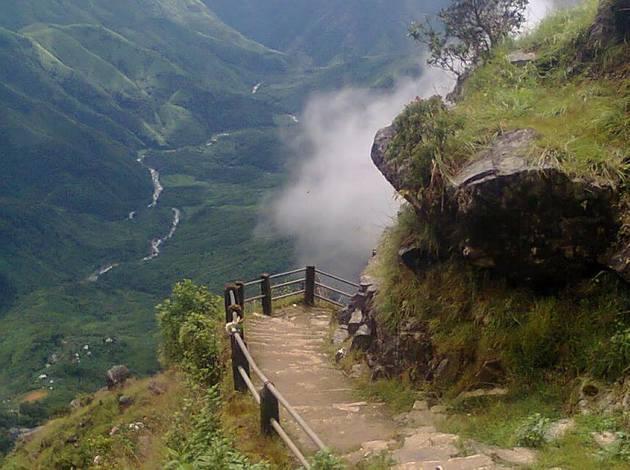 Located in the Khasi Hills of Shillong, is a nature lovers paradise called the Laitlum Canyons. A lesser known tourist spot, it is a great place to findsome peace and quiet away from the city. Ideal for trekking and hiking or even just relaxing and enjoying the breathtaking views. Walk through the gorges or try the ropeway. 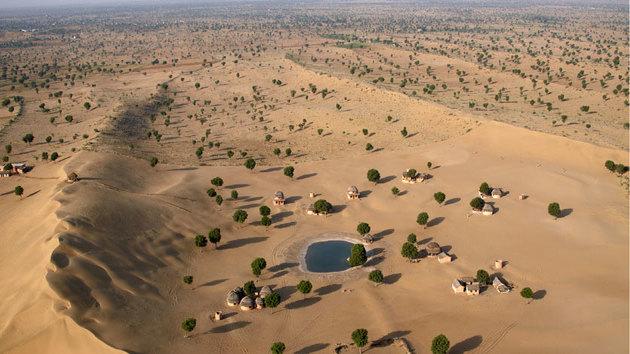 A quiet oasis nestled in the Thar desert of Rajasthan, Khimar is truly an offbeat getaway. Whether you want quiet alone time or a romantic getaway, this place promises the seclusion you need in the midst of rolling sand dunes. The Khimsar Fort is a beautiful 16th-century structure with great historic significance and a must visit. The area is only accessible by jeep, camel or horseback so you know how remote it is and the chances of being overwhelmed by crowds are very slim. 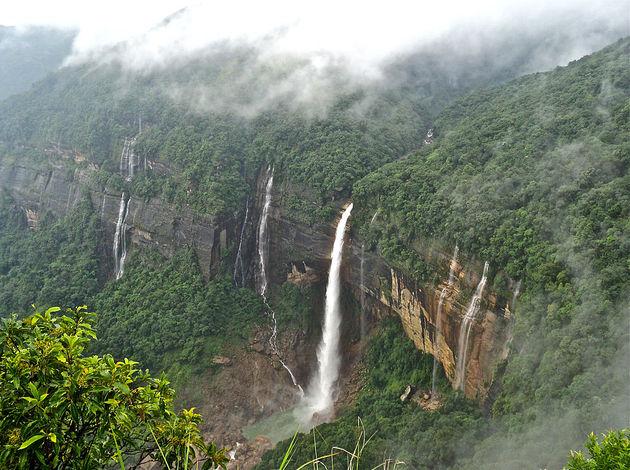 At the height of 1115 ft, they are the tallest plunge waterfalls in India. The falls are fed by collected rainwater and are therefore located in one of the wettest places on earth, Cherrapunji. The best time to visit is the monsoon season to see the falls in their full majesty. You can also visit in other seasons as the water continues to flow albeit with less force. There is small plunge pool at foot of the falls. 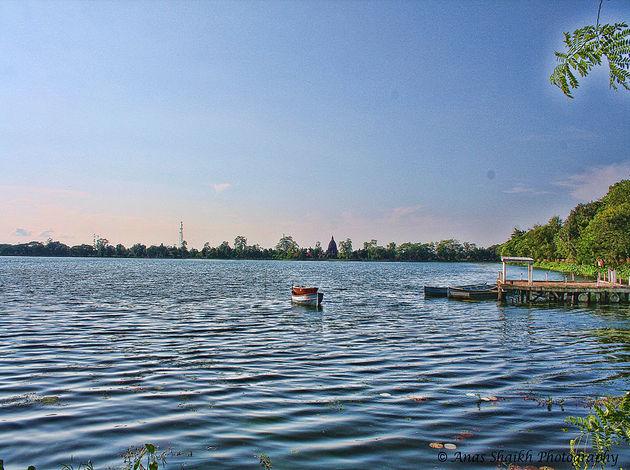 Sivasagar is a historic town located in Assam. It was the capital of the Ahom Kingdom from 1699 to 1788. There are many historic monuments and temples worth visiting here and there is a water body which is the towns main feature and the reason for its name. 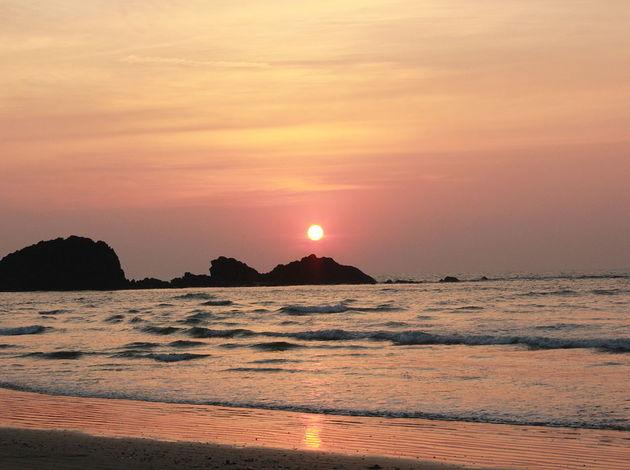 This is Indias longest a Drive-in Beach and said to be one of the best in the world. Located in Kannur, this beach is popular among European tourists in the winter. The beach festival that takes place in the month of April is a major attraction and a must visit. There are improved facilities now around the beach that cater to tourists. Although there are several beaches in India, the unique experience of driving or riding your bike on the beach can only be enjoyed here. 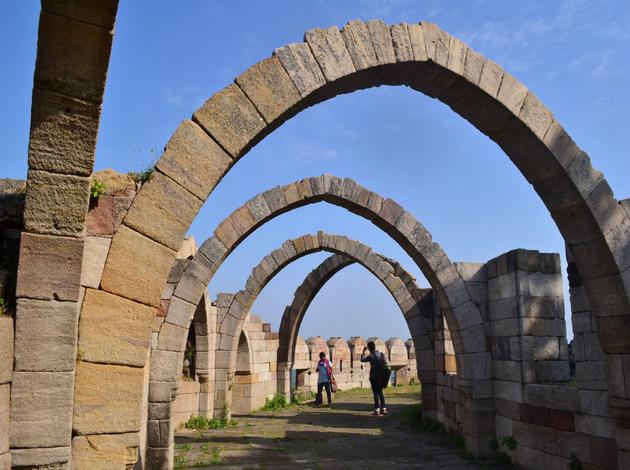 Located about 45km from Vadodara is the historic village of Champaner. It is where the Champaner-Pavagadh Archaeological Park, which UNESCO designated a World Heritage Site in 2004 is located. There is also a Jama Masjid here which is considered on of Gujarats most celebrated architectural marvels. Champaner is best visited in the winter months as summers in Gujarat can be harsh making it difficult to explore these sites. 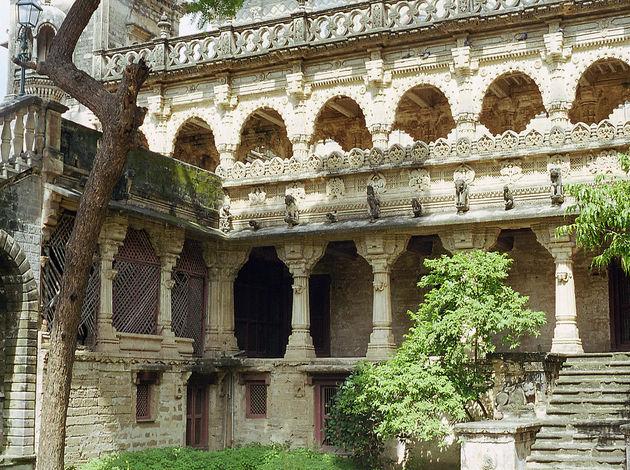 Gondal is located in Rajkot and is has great historic significance in Gujarat. It was once ruled by the Hindu Rajput Jadeja dynasty. The beautiful Naulakha Palace here is the main attraction with stunning architecture and sprawling lawns. The Palace Museum displays several historic artifacts. Also worth visiting are the Riverside Palace and the Huzoor Palace which is the current royal residence with one wing open to thepublic. The Orchard Palace is now converted into a heritage hotel. 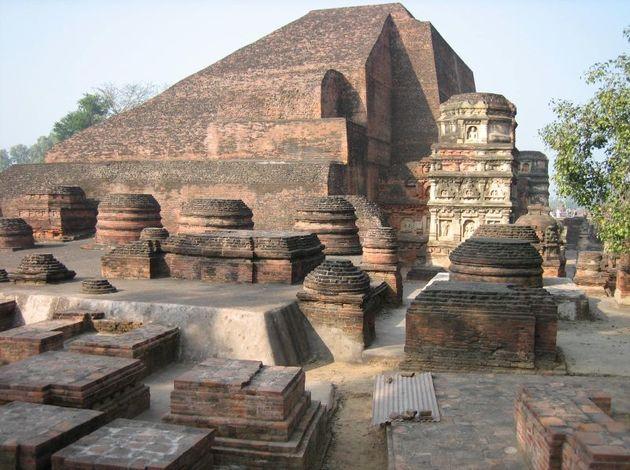 A UNESCO World Heritage Site, Nalanda was a great center for learning from the seventh century BCE to c.1200 CE. A pretty unexplored place in India, it was an important Buddhist monastery in the Magadha kingdom. Today it attracts foreign and Indian tourists alike who are keen to visit the ruins and explore more of its history. It is also an important destination for Buddhists from around the world. Here one can also visit the Nalanda Archeological Museum. 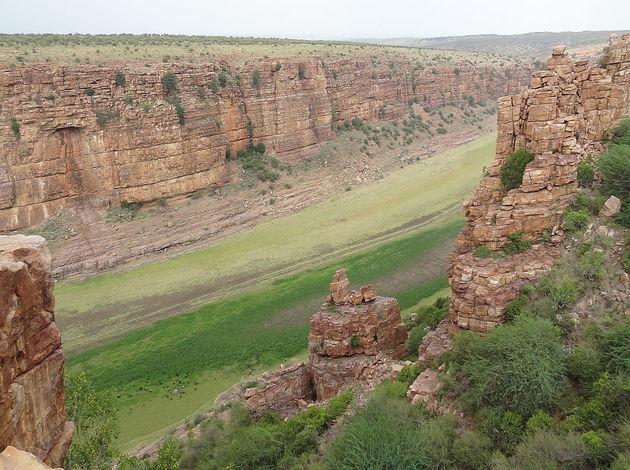 Gandikota is a village on the banks of the river Pennar, it is surrounded by jagged red hills and deep valley making it a very picturesque site. Historically it was the seat of the Gandikota kings and the fort here along with its natural topography were a major protection to the people. Although in ruins the Fort and the temples within it are worth a visit. Also, the views from the top are stunning. 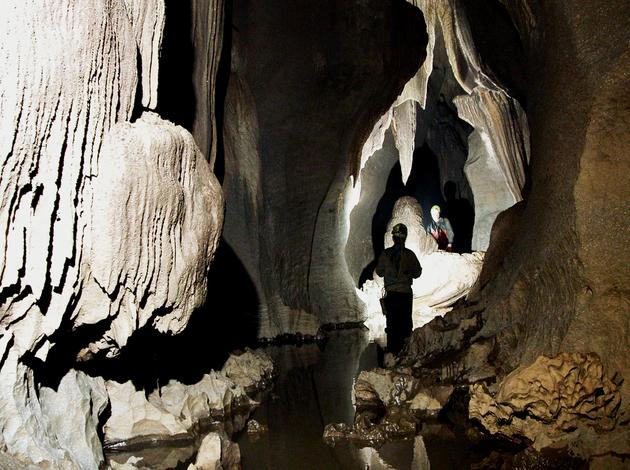 Perhaps some of the most beautiful natural attractions in the country, these caves are deep, dark and seemingly endless. If you are adventurous and looking to try something new, this is exactly the kind of place you should visit. The unique rock formations within the caves make navigation challenging but are worth the extra effort. The horizontal and vertical caves are largely unknown to most tourists and are therefore unspoiled. 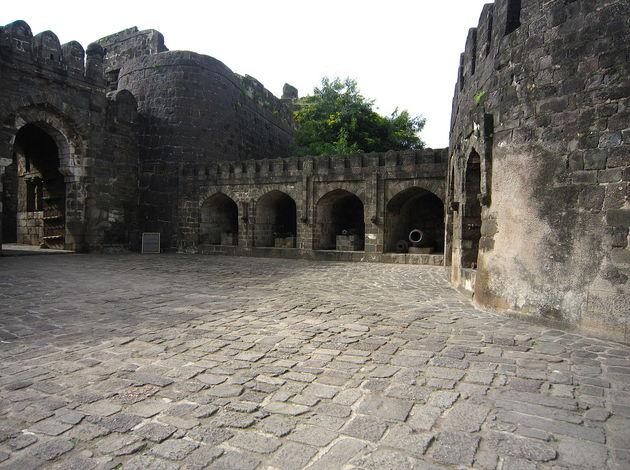 The fort was formerly known as Deogiri Fort and dates back to the 14th century. It was once the capital of the Tughlaq Dynasty from 1325 to 1351. There are several surviving structures of this historic fort including the outer wall, the Chand Minar and the Chini Mahal. A trek to the top promises uninterrupted views of the Western Ghats. 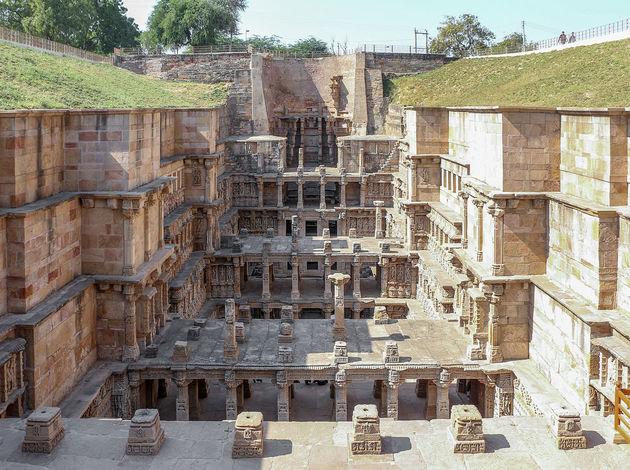 An ancient town in Gujarat, Patan is located about 110 km from Ahmedabad. It was a prominent town in the Chavda kingdom. There are several historic sites worth visiting here including forts, step wells and temples. The most important attraction here is the Rani Ki Vav, an ancient step well and a UNESCO World Heritage Site. The Patola Saris made here are also famous. 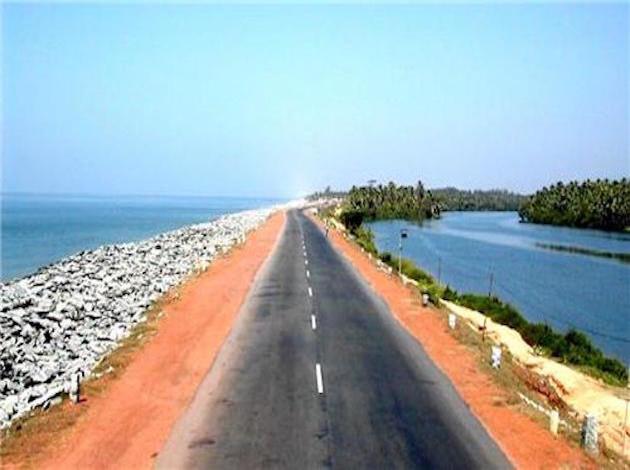 If you travel about 55km from Udipi in Karnataka you will find yourself at this stunning beach. The unique feature of this beach is that adjacent to it runs the NH-66 and on the other side runs the Suparnika River. You can drive along this stretch or even just walk along the beach enjoy a beautiful sunset as it reflects off both the sea and river.

India is a vast expanse of unexplored treasures, when planning your next holiday check out the offbeat, the little known, the unheard-of and be pleasantly surprised. 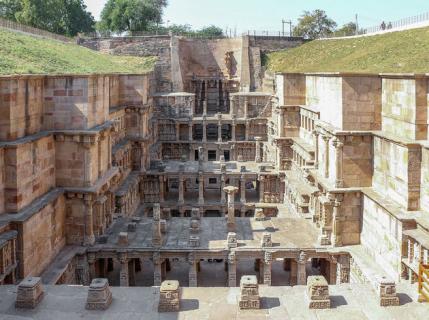 20 Offbeat Places in India to Explore this 2017