Magnificent Cities of Madhya Pradesh That You Can Explore Like an Insider!

One of the largest states in India after Rajasthan, Madhya Pradesh owns a magical quality that enthralls anyone who visits it. Strewn with the relics of past, of religion and of architecture, Madhya Pradesh  offers you umpteen reasons to come and witness its glory. From renowned erotic monuments of Khajuraho to natural landscapes such as Kanha National park, this central land of India tucks a plethora of attractions in its folds and leaves you fascinated. Nestling an array of religions such as Jainism, Hinduism, Buddhism and Islam, this place has harbored diversity in its landscape, something that reflects well even today. Its carved temples, stupas, forts and palaces add to the tourism quotient making it one of the most sought after destinations in India. In order to unravel the beauty of this grand land, let us inform you about atleast four of its cities that link the states past to the present, and tradition to modernity. While many of you must have heard a lot about these cities, we will tell you what and how to explore them so as to understand this state through a lucid glance. 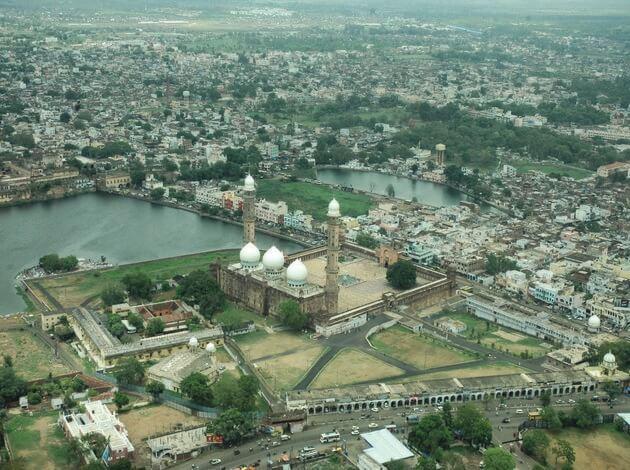 Many of us would associate Bhopal, the capital of the state MP, with the Gas tragedy that took place here in 1984. However, there is a more pleasing aspect to the city that lies in its amalgamation of scenic beauty, monuments and historic corners. There are old mosques, crowded bazaars, modern edifices, broad avenues and two picturesque lakes that render beautiful vistas of nature as well as culture. Colluding modernity and traditionalism that gallop together here, this city fascinates the travelers who visit it. Due to the presence of an array of attractions here, Madhya Pradesh Tourism considers it to be pivotal enough for its existence. However, moving away from the attractions, you will also encounter the essence of this city in its narrow lanes and the smiles of people. Known for the grandeur of the Nawabs, the Begums of Bhopal also deserve accolades for their royal presence. Displaying great valor, the begums of Bhopal like Qudsia Begum ruled the state after her husbands assassination and set an example to other female rulers to come. Nawab Sikander Begum, Begum Sultan Shah Jehan and Begum Kaikhusrau Jahan are other notable female rulers that adorned the crown of Bhopal by reigning during adverse times.
Attractions to Visit: Van Vihar National Park, Madhya Pradesh Tribal Museum, Badi Jheel Lake, Taj ul Masajid, Lake View Bhopal, Lower Lake, Bharat Bhavan, and Machli Ghar.
Quirky Experiences in Bhopal: Bhopal is understood best with its street food. Visit the famous Chatori Gali for lip-smacking street food that ranges from non-vegetarian to Vegetarian and from spicy to sweet. Another way to treat yourself on a trip to Bhopal is by indulging into some retail therapy. The city is famous for handicrafts, but on your visit, make sure you shop for the beautiful Bhopali Batua with intricate Zardosi work which is a specialty. These small pouches can make a definite style statement with its detailed art work that incorporates fine wires of gold or silver to weave stunning pearls over silk fabric. The Jari kaam is done using the Karchobi technique which stands out! Now the art is recreated even on wedding dresses and home decoration pieces.
How to Reach Bhopal: By Bhopal Airport or Bhopal Junction.

The summer capital of Mahraja Rewa, Govindgarh is an offbeat travel destination in Madhya Pradesh that allures the travelers with its historicity and laid back vibe. The prominent reason for people to visit this place is to see its stunning Govindgarh Palace. Built like the Udaipur Lake Palace, this one looks appealing with its quaint charm. It was also officially the residence of the white tigers till 1978.

Attractions to Visit: Govindgarh Palace
Quirky Experiences in Govindgarh: From Govindgarh, you can also make a visit to White Tiger Safari to Rewa.
How to Reach Govindgarh: Reach Rewa Airport or Rewa Railway Station. 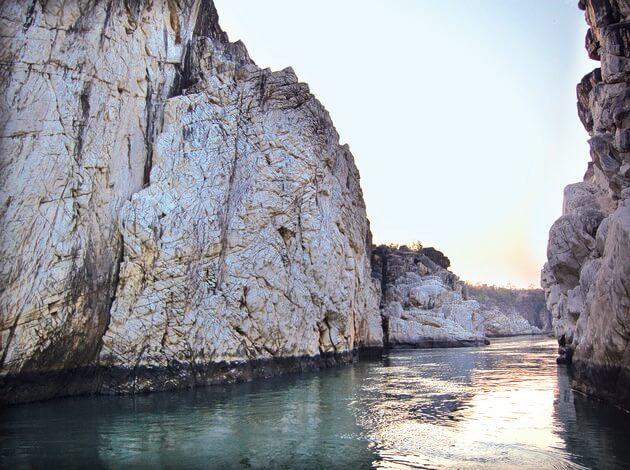 Known for its exquisite beauty and a relaxed vibe, Jabalpur is counted amongst one of the top destinations by Madhya Pradesh tourism. Among its many attractions, Jabalpur is primarily known for its marbled cliffs through which the river Narmada passes through. Bedha Ghat, dhuandhar waterfalls, Dumna Nature Park are some of the jewels that will draw you towards haven of nature. Its edifices contribute towards its naming as the cultural capital of Madhya Pradesh.
Attractions to Visit: Dhuandhar Falls, Marble Rock Formations, Bhedaghat, Lord Shiva Statue, Chausat Yogini Temple, Madan Mahal Fort, Balancing Rocks, Gwarighat, Dumna Nature Reserve Park
Quirky Experiences in Jabalpur: Gakkad-Bharta and Khoye ki Jalebi are two most famous food items that you must try here.
How to Reach Jabalpur: Through National Highway 7 or Jabalpur Airport (Dumna Airport). 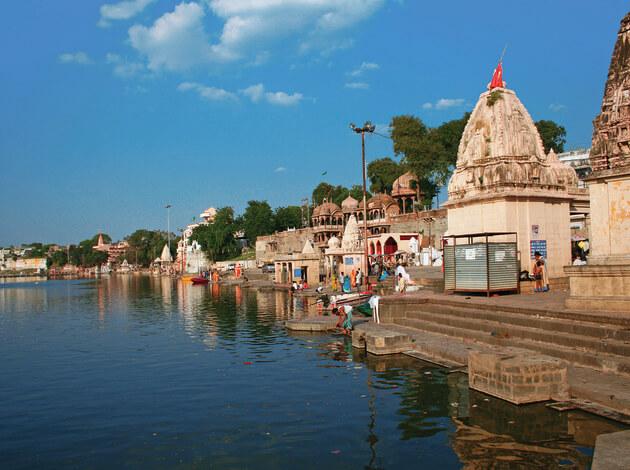 The temple city of India, Ujjain will leave you fascinated with its history and religious devotion. One of the ancient cities of India, Ujjain is an amalgamation of history, myth, spirituality and religious belief. Located on the eastern bank of shipra river, this city has preserved its cultural heritage well. Coming to the literary forefront, Ujjain and Kalidas are considered to be inseparable. Kalidas, one of the most prominent classical Sanskrit writer, mentions this eternal city in his poem Meghdootam with full vigour. He described it as The town fallen from Heaven to bring Heaven to Earth suggesting its embellished art, architecture and history. Dating back to 600 BC, this city was once home to Ashoka, one of the greatest kings of India. Today, Madhya Pradesh tourism wants to delineate this exquisite city on the world map and wants to highlight its various attractions, promoting international tourism. During the auspicious occasion of Sihanstha in Jan 2016, Ujjain hosted a heritage walk and Mini Marathon that spanned over 2 kilometers covering the heritage spots in the city. The event pulled huge crowd and rightfully got a mention in the Golden Book of World Records. To add to the pomp and show of the Sihanstha, after the first Shahi Snan a extravagant light and sound show was organized at the Kothi Palace of Ujjain in April 2016. For around 40 minutes, the audience were hooked to the beautifully portrayed depiction of creation of universe and the emergence of ancient city of Awantika. The show was an epitome of Ujjain's golden history, mythology and lyrical past!
Attractions to Visit: Shri Mahakaleshwar Temple, Kal Bhairav Temple, Mangalnath Temple, Chintaman Ganesh Temple, Sandipani Ashram, ISKCON Temple, Gadkalika Temple, Bade Ganeshji Ka Mandir, Gopal Mandir Temple and Vikram Kirti Mandir Museum (which is famous for the Vikram Betal Stories that every Indian kid grew up listening to!)
Quirky Experiences in Ujjain: Visit Tower Chowk, one of the most famous places for street food in Ujjain. Come across mouth-watering snacks like chaats, Pani Puri, corn snack with ghee and Bhel Puri during your visit here. Taste the Dal Bafla and the take home packets of crispy Ratlami Sev.  On your trip to Ujjain, make sure you visit the Ujjain Observatory (known as Ved Shala) which dates back to the early 18th century and was constructed by Savai Jai Singh. One of the oldest in India, the Observatory boasts of 13 intricately designed instruments that helped to study the motions of planets and orbits.
How to Reach Ujjain: The nearest airport to Ujjain is in Indore, Devi Ahilyabai Holkar Airport or Ujjain Railway station
Hope all these experiences and attractions motivate you enough to take your wanderlust to Madhya Pradesh!
This article is a part of series by TripHobo on Madhya Pradesh Tourism. Read more articles here 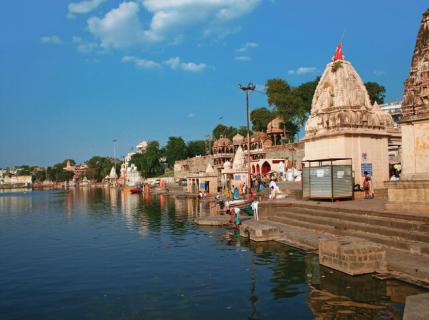 Magnificent Cities of Madhya Pradesh That You Can Explore Like an Insider!