15 Remarkable Destinations To Visit In Europe In November

Europe is always a good idea, no matter which month or which season! Each time of the year brings with it its own different charm that captivates visitors. The monsoons are beautifully lush green, spring is vivid, summers are full of life, winters are chilly yet charismatic and autumn is spectacular. Now, we've already covered where to go in Europe in October but November in Europe is a lot more different than the rest! We have compiled a list with pulsating cities, enchanting regions and picturesque towns. Ready to go on a European sojourn? Here are the best places to visit in Europe in November -

Image Source: Wikimedia
Jazz lovers would definitely love visiting Madrid in November as it hosts the annual Madrid Jazz Festival then. This capital city of Spain has something for everybody, be it family vacationers, solo wanderers, architecture and photography buffs, history and culture lovers and even bachelor/bachelorette party enthusiasts! It is probably the best place to go for sun in November.
What to see: Museo Nacional Del Prado, Parque Del Retiro, Royal Palace of Madrid, Plaza Mayor.
Travel Tip: Do enjoy a ride on the Madrid Cable Car.
Madrid is also in the list of the Best Honeymoon Destinations in November

Venezia, the Italian city that oozes romance, proves to be a perfect European destination to be visited in November. An off season, this is the time when the queues are short, the hotels offer great discounts and many of the restaurants experiment with their menus and offer delicious food. If you happen to be visiting towards the end of the month, do make it a point to visit the Basilica Santa Maria della Salute as it hosts the lovely La Salute festival.
What to see: Grand Canal, St. Marks Square and St. Marks Basilica, Doges Palace, Rialto Bridge.
Travel Tip: November tends to be cloudy and wet. Do pack an umbrella or raincoat.

Image Source: Wikimedia
Lying in the northern hemisphere, Romania enjoys the fall season in Europe during November. The Transylvania region in the country has always attracted visitors because of its myths, legends, delightful medieval towns and breathtaking natural beauty. Famous for its Bran Castle, heres what our hobo Annette encountered on her visit to Transylvania.
What to see: Bran Castle, the Saxon village, Bear Lake in Sovata, the Carpathian Mountains.
Travel Tip: Dont forget to pack some garlic! You might encounter a Dracula afterall!

Visiting the Wicklow Mountain Range in Ireland during November will make you feel like you have stepped into a fairytale land where fairies and leprechauns exist. Thats how beautiful the region looks during autumn- trees laden with golden leaves, greenery everywhere and cascading waterfalls.
What to see: Glendalough, the town of Wicklow, Avondale House & Forest Park, Powerscourt Waterfall.
Travel Tip: The region tends to face a few storms during this month. Not ferocious ones though so you can still plan your visit.
Must Visit: Best Beaches in Ireland

Image Source: Wikimedia
In search of an offbeat place in Europe where you can go in November? How about you head over to the Balkan country of Bosnia and Herzegovina? Still relatively unexplored, the nation is a hidden gem in Europe and is perfect for nature and adventure enthusiasts. With skiing season kicking in towards the end of November, the Jahorina and Bjelasnica Mountain peaks play host to an array of winter sports.
What to see: Stari Most Bridge, Sutjeska National Park, Tvrdo Monastery, Jahorina and Bjelasnica Mountains, Gazi Husrev-bey Mosque.
Travel Tip: You have to go white water rafting while visiting Bosnia and Herzegovina.

An overwhelmingly stunning county in North West England, Cumbria is the best place to go in Europe in the month of November. Considered as one of the most beautiful regions of the UK, Cumbria is made up of the North Pennines, the Lake District, the Furness Peninsula, the Eden Valley and part of the Yorkshire Dales. Boasting of valleys and fells, the region offers plenty of hiking opportunities for visitors.
What to see: Derwentwater Lake, Windermere, the county town of Carlisle, the village of Grasmere.
Travel Tip: You have to try glamping in Lake District. November tends to be wet. Do carry an umbrella or raincoat.
Do explore the Best Natural Wonders Of Europe

Image Source: Wikimedia
A border state in south eastern Germany, Bavaria is every travellers dream come true. Home to outstanding cities such as Munich, Nuremberg, Bamberg and Wrzburg to name a few, Bavaria is the perfect amalgamation of architecture, nature, culture and history. There is something for everybody, no matter what age, in this amiable state of Bavaria.
What to see: The Bavarian Alps, the Bavarian Forest National Park, the resort town of Berchtesgaden, the town of Lindau, Marienplatz in Munich.
Travel Tip: You will require atleast a couple of weeks to explore the entire region. Plan your itinerary well in advance using this cool trip planner.

Fondly called the jewel of the Adriatic, Dubrovnik will make you fall in love with it. And thats an understatement! When visiting in November, you will get to witness the festivities associated with St. Martins day. The festival also heralds the official wine season. Now thats one definite reason for wine lovers to visit Dubrovnik! Do ride the cable car in the city that gives you dazzling views of the entire region.
What to see: Ancient city walls, Lokrum Island, Old Town, War Photo Limited Museum, Lapad Beaches, Franciscan Monastery.
Travel Tip: Unfortunately, November is the wettest month of the year in Dubrovnik. The city however still manages to beguile its visitors during the monsoons.

Image Source: Wikimedia
Although facing a few wet and gloomy days during the month, Evora is one of the few places in Europe where it is hot and sunny in November. Located in the heart of the Alentejo region, Evora is full of history and architecture and proves to be the perfect city for wanderers in search of an offbeat destination in Europe. It is home to plenty of Portuguese National Monuments and provides many fabulous photography opportunities for budding photographers.
What to see: Evora Aqueduct, Diana Roman Temple, Praa do Giraldo, Almendres Cromlech, the Bone Chapel.
Travel Tip: Skip the crowded restaurants and head over to tiny family-owned eateries that serve heavenly dishes.

If you love the magic that winters bring with them then Prague is one of the best places to visit in Europe in November for you. This City of a Hundred Spires is romantic to the core and boasts of magnificent architecture. Having said that, the city also has a lively nightlife that should be explored on your trip. Infact, do try the Underground Bar Crawl and enjoy the citys nightlife to the fullest.
What to see: Old Town Hall Tower & Astronomical Clock, Charles Bridge, St. Nicholas Church, Prague Castle, Golden Lane.
Travel Tip: Prague tends to be freezing cold in November. Dont forget to pack extra woollen wear, including gloves and mufflers.
Visit the most Beautiful Bridges In Europe

Image Source: Wikimedia
Officially the County of Perth, Perthshire looks right out of Mother Natures vivid fantasy. Acres of rolling hills, cascading waterfalls, lyrical landscapes, beautiful moors and enchanting forests- thats the county in a nutshell for you. According to Sir Walter Scott, Perthshire is "The fairest portion of the northern kingdom." How can we not agree with him?!
What to see: The peaks of Schiehallion and Ben Lawers, the Hermitage, Queens View, the Scottish Crannog Centre, House of Bruar.
Travel Tip: Gleneagles in Perthshire is a must visit for golf enthusiasts.

The most environment friendly and green city out there, Ljubljana is the capital of Slovenia. A shining gem in the necklace of Europe, this is one destination you can add to your wanderlust wishlist. Better yet, why not visit it during your November escapade? You will feel like you have stepped back in time during your vacation in Ljubljana. The architecturally marvellous buildings and the denizens efforts towards preserving the environment will leave you in awe of the city.
What to see: Old town area, Butchers Bridge, Ljubljana Castle, Preservov Square, National Museum of Contemporary History, the Fountain of Three Carniolan Rivers.
Travel Tip: Indulge in some authentic Slovenian food at the Downtown region of Ljubljana.
Plan a vacation at these small towns in Europe

Image Source: Wikimedia
If you have skiing on your mind, you have to head over to Zermatt in November. The skiing season officially begins by then and you will have a time of your life zooming down the beautiful Alps. The town is located at the foot of the Matterhorn thus making it a favourite getaway for winter sports enthusiasts.
What to see: Gornergrat Bahn, Matterhorn Glacier Paradise, the Matterhorn Museum, the Sunnega Paradise Ski Area, Mountaineers Cemetery.
Travel Tip: Pack enough winter wear as the town tends to get super chilly.

One of the best places to see the enchanting northern lights, Svalbard is one place in Europe you should definitely visit in November to catch a glimpse of this natural phenomenon. The Northern Lights are unpredictable but September to March is the time during which they might be spotted in the sky. Even if you dont end up witnessing the stunning lights, you can still enjoy the warm hospitality that the archipelago of Svalbard has to offer.
What to see: The Northern Lights of course!
Travel Tip: Be prepared to face freezing temperatures. Pack your clothing accordingly.

Image Source: Wikimedia
Explore the beautiful merger of the old world charm with modernization at the city of Nice in France. Having a pristine shoreline, the city boasts of quaint cafes, busy markets, lively atmosphere and interesting museums. The city also hosts the Nice-Cannes Marathon during the month of November. Do participate and make your vacation a fit and healthy one!
What to see: Promenade des Anglais, Castle of Nice, Cours Saleya Flower Market, Muse Matisse, St. Nicholas Orthodox Cathedral.
Travel Tip: Have a meal at the Restaurant JAN. You can thank us later!
Shortlisted a destination for your November in Europe? Do let us know how your vacation went. In conclusion, we quote novelist James Baldwin, ''I met a lot of people in Europe. I even encountered myself. 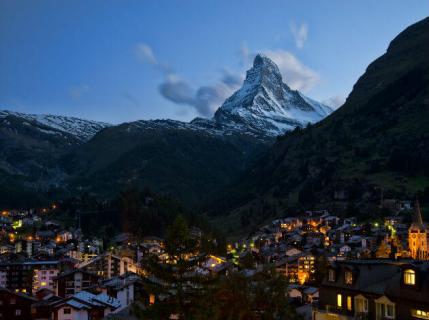 15 Remarkable Destinations To Visit In Europe In November