The centre of Hermanus was engulfed in a large bush fire on 16th January 2008. Taking in its wake - 6 thatched houses which were burnt to the ground, the small hill of Hoys Koppie and a huge slice of the high mountain range, some 5 kms long and 220 hectares were completely destroyed. Hermanus Golf Club and our Floral reserve of Fernkloof luckily escaped. 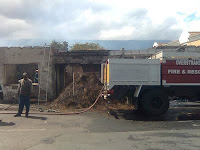 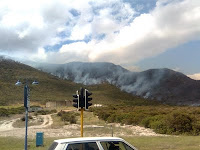 One fire destroyed house.....and the mountain side alight.

Added to the mayhem for the emergency services was an electricity power cut, which meant that the traffic lights were out, so the entire town was in utter chaos and the traffic police had their hands full directing traffic to safety all day.

The new John Platter wine book hit the streets in Nov 2007 and the crowning glory for our local wine valley, Hemel-en-Aarde, was that the wine voted the best in South Africa, against 6000 other contenders, was Bouchard Finlayson’s Tete de Cuvee Pinor Noir 2005. Sadly for those wishing to get their hands on a bottle, they have already sold out, unless of course you are willing to offer Percy Tours a large bundle of cash for the 2 bottles sitting in my wine cellar :-))))

Even tho’ it was afew months ago, the Rugby World Cup was a fabulous event, with many mighty giants being surprisingly thrashed by smaller up-starts, making this Rugby World Cup completely compelling watching. Title holders England started off badly and everyone had them down as having a very slim chance of getting anywhere. Even the UK “bookies” had them down as 80:1 to reach the finals. So to see them enter the final against South Africa was a dramatic transformation in their game play.

South Africa has always been a mighty strong Rugby side and England were in for some very hard work to try to topple them. All credit to both sides for making the final match such a thrilling game.

Being a Londoner who has now been living in South Africa for over 4 years, I was firmly sitting on the fence, with me waving a large South African flag above my head and waving a small George Cross under the table :-)))

As for the South African public, the entire country grew to truly appreciate their sides efforts, with the press doing a fabulous job at whipping up national pride and patriotic feelings. South Africans of all social circles were wearing their country’s green rugby tops, with flags hanging off buildings and plastered all over cars and lorries.

Huge screens were erected at 100’s of locations across the country, with the Hermanus open-air auditorium having a massive screen and sound-system, which over 1000 people attended to cheer their side on.

The party atmosphere obviously got to fever-pitch when South Africa won.

If you thought South Africa was a 3rd world country with no money – then boy did you have that wrong.

South Africa still rockets-on as a power-house emerging world economy. It illustrates this clearly in the famous Jo’burg township suburb of Soweto, which is home to over 900,000 people and where the largest shopping mall in the southern hemisphere has just opened its doors on 27th Sept, 2007. Maponya Mall houses stores such as Levi’s, Woolworth’s (South Africa’s version of up market Marks and Spencer), Nike, Puma and many trendy restaurants serving up Sushi, Italian, French and Thai cuisines.

Queues of eager shoppers slept outside the mall nights before its official opening, so that they could snap up big 1st day opening bargains. Even at 9pm that day, people could be seen walking home with brand new TV’s or stereo systems in their arms; the traffic queues were so large that 100’s of extra Traffic Police had to be called into direct it.

This 3 year-to-build and R650million project was officially opened by Nelson Mandela, who has this year started to reduce his public appearances.

If this wasn’t enough of a show of economic boom, then you should see the housing market in Soweto. It is estimated that there are many new estate agents starting businesses here to cater for the large demand for houses and that a standard “matchbox” house is fetching as much as R70,000 (£5000). While larger houses in the Diepkloof area of Soweto are reaching astonishing prices as high as R1.5million. (That’s about £100,000 to you and me).

Gob-smacked? Yes you should be, it’s truly incredible how fast this “new” country’s economy is growing.

In mid-January, Percy Tours was honoured to chauffeur around the film crew of brand new Marks and Spencers TV adverts, at their official end-of-shot party. The adverts featuring Twiggy and Jade Jagger are to launch the UK summer range of ladies clothes and were all filmed around Hermanus, with it’s pretty scenic back-drops. So keep your eyes out for these.

As usual there are many new Percy Tours photos on your Gallery site, so check them out by clicking here at - See over 200 Percy Tours Photos

For a full listing of who is playing who, please check out their website. The top tabs of the page have each of the 4 continents/regions – Africa, Asia, N&C America and Europe -

Also available is a pdf file that lists every single match during the 2010 finals and where each match will be played in South Africa. Please check out –

It is predicted that ticket sales should start in early 2009.

As for the building work, everything is going to plan, which is all good news.

Below is Cape Town’s Green Point stadium in late Dec 2007, with the new stadium now sitting where the Golf course used to be. It's foundation work now completed and the first tiers of grandstand supports are clearly visible under the yellow cranes. Quite a transformation in 12 months, I think you will agree. 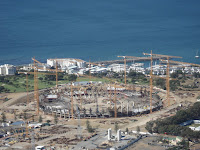 Gold Miners rescued, after being trapped a mile under ground.

3,200 Gold Miners who were trapped under ground on 3rd Oct 2007, at Elandsrand mine, owed by Harmony Gold Mining Co., were finally rescued a few days later.

Their rescue high-lights the vast dangers they face working in South Africa’s gold mines which are the world's deepest, with 113 workers killed last year by rock falls, tremors and gas explosions. About 180,000 people work in gold mines in the country.

Declining output from South Africa's mines has forced companies including Harmony to dig deeper to tap the Witwatersrand Basin, the world's largest gold deposit, underneath Jo’burg. Harmony has plans to deepen the shaft to 3,566 metres to tap richer seams of gold and extend the life of the mine. While South Africa is the world's largest producer of this precious metal, production fell 7.5% to 8.85 million ounces last year, the lowest level in 84 years.

The magic of Red Wine.

Patients suffering from a number of diseases could soon be trying a new drug that has been found to be in Red Wine. SRT501 (or Resveratrol) could herald a whole set of new drugs that have been found to slow down the effects of ageing and diabetes. Trials are to start in Newcastle-upon-Tyne and India very soon. SRT501 apparently has the power to considerably reduce glucose and weight gain and if taken with another diabetes drug Metformin, amplifies these benefits greatly.

So our advice to you is – keep drinking red wine because its scientifically proven that it is good for you. Bravo we all shout :-)))

Morgenster Olive Oil does it again.

Morgenster, the Somerset West wine and olive estate, has once again been voted “The Best Extra Virgin Olive Oil in South Africa” at the recent 2007 SA Olive Awards held in Paarl. They also collected the gold award for “The Best Table Olives” with their Spanish style Nocellara green olives. These just add to their already impressive list of awards, including Italy’s L’Orciolo d’Oro winner for 8 consecutive years and gold medal winner at the Los Angeles County Fair.

So get down to your local supermarket and try these amazing South African products.

Shark diving nutter to be filmed free-swimming with the worlds most dangerous sharks.

A recent Discovery Channel documentary showed a South African, Craig Ferreira, free-diving (in other words WITHOUT the protection of a cage) with a 5 metre Great White Shark at Gansbaai, Hermanus, South Africa.

This first program was such a huge success when aired in USA, that the Discovery Channel has now commissioned him to free-dive with the worlds 12 most dangerous sharks known to man, dubbed "The Dirty Dozen."

The extra ingredient to these shows is his family are also filmed and they are most definitely in 2 minds as to whether it’s safe and whether all this dangerous swimming is a good thing or a bad thing. So this adds a full and comprehensive dramatic to this new series.

“Mr. Build-It” is back in South Africa.

Millionaire Irish builder Niall Mellon is back again in Cape Town for his 5th year in a row, to do his utmost to transform the townships, by building as many inexpensive and solid houses as he can in a short space of time.

In October 2007 he organised a huge army of 1350 building professionals from Eire to spend one week to construct as many houses as possible. This army give their time for free and paid for their air tickets and living expenses by fund-raising in their home country.

He also has plans to start tackling the housing shortages in Gauteng (Jo’burg & Pretoria) when he bought a South African commercial building company that specialises in low-cost housing and turning it into a not-for-profit organisation.
His aim with this company is to start a mass production of factory-made homes that can be erected quickly and has all the comfort and facilities that all normal homes have.


Kirstenbosch Botanical Gardens are set for their large list of summer out-door musical treats, as is the winery of Vergelegen in Somerset West.

Jazz, Rock, Pop, Dance, Rave and Trance, Soul, Folk, Classical, and a huge dollop of African sounds are all catered for.

Fatboy Slim arrived in South Africa on 2nd Dec 2007 and was not only spinning loads of tunes at trendy night clubs across the country, but practised his football skills with Township kids. He was also here to announce the opening of a youth soccer training program in Cape Town with the international charity that he is involved with - Coaching For Hope.

Fatboy Slim has recently been announced as the official DJ for the 2010 FIFA World Cup.

Thanks all and we’ll be in touch with another Newsletter in 3 months time.

PS. We will be on holiday to London in late May 2008, for those of you wishing to catch up and our wedding is planned for November 2008 in Hermanus. :-)))) XXXXX
www.percytours.com