Leopards in the Hermanus mountains

Leopards in the Hermanus mountains (and beyond) 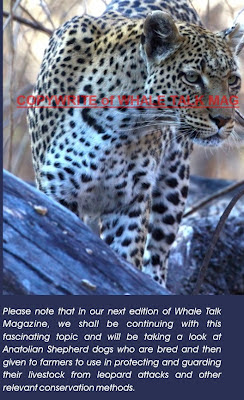 On a recent Tour to the Cederberg, I was honoured to have met the owners, organisers and field researchers of the Cape Leopard Trust and was awe-struck at how much they are doing for conservation.
The Cape Leopard Trust aims to facilitate conservation of the Cape's predator diversity through implementing conservation strategies, research projects and tourism initiatives, while also educating and encouraging the youth to have a vested interest in the environment, plus doing major work to find solutions to human-wildlife conflicts, with especially farming and habitat loss.
4 major locations are constantly being researched and studied – Cederberg, Swartberg, Namaqualand and the Boland mountains from Hermanus up past Worcester.
In the past, 8 leopard were killed per year in these areas, but thankfully since the Cape Leopard Trust started it’s amazing work, there have been no leopards killed since 2007, which all comes down to the great work of constantly informing the local communities and the importance of public awareness about the plight of these magnificent creatures.
The adult Fynbos Cape Leopard is much smaller (20 to 30kgs) than the Karoo Leopard (up to 50kgs) and Savannah Leopard (which can reach 50 to 80kgs) – which all comes down to their prey species – 78% of a Fynbos Leopard’s diet is Rock Hyrax and Klipspringer.
The Boland project is only 2 years old, covering over 3000 km sq and is split into 3 areas, with the southern most one equipped with 82 camera traps at 50 spots and has so far successfully counted 18 adults, 2 cubs and identified 25 different prey species.
Camera traps are a very important research tool as they take photos of every animal that walks past them and so the entire bio-diversity can be analysed and population figures can be calculated. GPS collars are also very useful at accurately measuring the movements of 1 individual creature and vastly help in working out the exact “home- range” of each Leopard, with males having much large ranges (350 to 1000km sq) which overlap with afew females ranges.
Hermanus has certainly had its fair share of recent sightings and encounters with our local Leopards. In June 2011 a young male Leopard was caught in a hi-tech trap and fitted with a GPS device so as to monitor its movements in the mountains near Tesselaarsdal in the Hemel-en-Aarde valley.  Grootbos (near De Kelders) camera-trapped a Leopard in October 2011 only 4 days after they had set up the camera; while next door the Flower Valley camera-trapped 2 Leopards (a male and a female) in Jan 2012. Further inland, the Platbos Forest and Farm 215 have also reported that Leopard tracks and spoors have been spotted.
It is highly encouraging and an absolute delight to know that these wildlife conservation organisations are doing such incredible research work to conserve our amazing natural wonders.
Credit and thanks must go to the Cape Leopard Trust, Quinton and Liz – www.capeleopard.org.za
There are many African animal encounters close to Hermanus for you to enjoy – from stroking Cheetahs, African Birds of Prey, Whales, Sharks, Seals, Penguins and an excellent Safari park 2½ hours away, for loads of ideas check out - www.hermanusactivities.net
Authored by Percy Tours – www.percytours.com / [email protected] / 072 062 8500
As ever we are all over the internet with loads of jovial and informative natterings – so why not check us out at –
Percy Tours Business Page on Facebook

Until next time, cheers,
Ronel and Percy at Percy Tours, Hermanus, South Africa.

Leopards in the Hermanus mountains