Leopards in Hermanus and beyond (part 2) 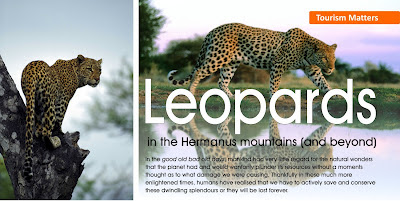 Leopards of Hermanus (and beyond…) (Article 2)
In the good old bad old days, mankind had very little regard for the natural wonders that the planet had and would wantonly plunder its resources without a moments thought as to what damage we were causing. Thankfully in these much more enlightened times, humans have realised that we have to actively save and conserve these dwindling splendours or they will be lost forever.
From the 1960’s many successful campaigners have pushed the boundaries, by highly informing humanity of the plight of many species, which has in turn made us all think a lot harder about helping to save the planet from our own destructive powers, by turning bad into good – from Sir David Attenborough and his amazing BBC nature documentaries; Jane Goodall (Chimpanzees); Dian Fossey (Gorillas); Jacques-Yves Cousteau (Oceans); WWF (Pandas, Dolphins and Whales); Greenpeace (stopping pollution, nuclear and actively pursuing Whaling fleets in their ships); many helping to save the Rhinos and Elephants; TV channels like BBC, Discovery, Animal Planet and National Geographic and now-a-days 1000’s of international conservation NGO’s, charities, UN organisations and local heroes.
Following on from our last article; Hermanus and the Overberg region has it’s own resident Leopards, which are being studied more and more closely by the Cape Leopard Trust (called the Boland Leopard Project). What their research has shown is that each male Leopard has a huge individual territory, which never over-lap with another male; while female Leopards occupy much smaller ranges that over-lap the boundaries of 1, 2 or 3 males ranges, therefore meaning that in reality there are fewer Leopards roaming freely than was first thought. Before this research information was known, farmers used to think that there were many more Leopards occupying tiny ranges.
Due to human expansion into the once remote and isolated regions, there have been many Human-Wildlife conflicts – especially between Farmers of cattle, sheep, goats and poultry and the carnivore cat species of Lions, Cheetah, Leopard, Hyena and the smaller Jackal and Caracal
The Cape Leopard Trust (and a number of other conservation organisations) are doing their utmost to stop these Farmer verses Cat conflicts, with many recent success stories.
Thanks to the large amount of research conduct by the Cape Leopard Trust, via GPS collars and camera traps, they are now able to accurately know how many Leopards there are and where they venture to. This important data obviously shows when and if Leopards are going onto Farming land where there are livestock.
One highly reassuring piece of data regarding the Cederberg Leopards is that 80% of their diet is made up from just 2 of the 30 wild prey species – Klipspringers and Dassies
These cats were once shoot, poisoned or gin-trapped by farmers, but thanks to the Cape Leopard Trust’s hard work over the last decade, they have actively engaged farmers with much important information, dispelling the myths with hard facts and implementing many novel and simple ways to co-exist.
These include – Leopard proof kraals. For small kraals, then the simple and effective way is to place chicken wire over the kraal; for larger kraals, then fencing that is over 2.5metres high and has an outward facing lip, is more than adequate to stop a Leopard from entering. Electrifying the fences also helps.
Throat protectors / collars for each sheep or goat are plastic, cheap, easy to fit and highly effective.
Anatolian shepherd dogs are also an excellent way to protect flocks. These amazing dogs are actively breed by conservation organisations and given away free to farmers. However for the maximum protection of any flock it is best to have a human Shepherd who stays with the animals, protecting them during the day, while the Anatolian shepherd dog protects them at night. This combination has an excellent success rate.
To supplement many farmers incomes they have started to diversify their revenue streams, with Tourism being the major player, as farmers have realised correctly that city dwellers love to escape the concrete jungle and to explore the open spaces of the countryside. The more eco-friendly the better, so conservation of wildlife has also taken centre stage, which has allowed many farmers to actively embrace the ideas put forward by the Cape Leopard Trust and others, by safe-guarding the Leopard and the many wild creatures that share our region.
Long may positive and inventive ideas continue to allow co-existence of humans and wildlife.
For more info on the Boland Leopard Project, please go to - http://capeleopard.org.za/research/leopard/boland
Authored by Percy Tours – www.percytours.com/ [email protected]/ 072 062 8500
As ever we are all over the internet with loads of jovial and informative natterings – so why not check us out at –
Percy Tours Business Page on Facebook

Until next time, cheers,
Ronel and Percy at Percy Tours, Hermanus, South Africa.

Leopards in Hermanus and beyond (part 2)