Over the last few years scientists have spotted the paw prints of 4 separate reclusive leopards roaming in the vast and scenic Hermanus mountain ranges.
During March 2006 they released another 5 leopard into these hills.
These beautiful creatures have been released to breed with the other 4 and (hopefully) reduce the number of the local baboon troops, who regularly terrorise the dust bins of the Hermanus outer suburbs – hay that’s mans intervention into nature (once again) :-)))

Electricity Blackouts -
Cape Town and the surrounding area are currently under-going a period of electricity blackouts. The reason for this is that the nuclear power station, that has 2 generators, recently had a bolt “accidentally” thrown into one of them, which shattered its turbine. This means that only one generator is supplying electricity to the entire area, when 2 should be doing the job. The replacement turbine needs to be built and exported from France and will take about 6 months to be fully operational. When that is fitted, the other generator needs to be shut down, serviced and refuelled with new nuclear fuel rods. (The current ones are “apparently” the wrong type) DOH!! Square peg in a round hole any body??
So it’s all abit silly here presently. Candles, gas cookers, torches and petrol driven small generators have sold out in milli-seconds from local hardware shops, due to everyone exploring other forms of power. I am even considering solar panels to be put on my roof.

Wines to be savoured -
With the grape harvest well and truly complete, we only have afew more months to wait before the first wines of this season hit the shelves. With over 1,000 wineries in the Cape region, we are in for another quoffing bonanza.

A local wine tour with Percy Tours, would never be complete without experiencing the new and quite excellent “Heaven” restaurant. Bruce from the outrageous and highly acclaimed B’s Steakhouse, conjures up a lunchtime menu with so many mouth watering delights. Try his Babotie or Malay chicken curry or chilli steak – stunning!! Set on a high view point that’s so mind bending and beautiful, that you wish you could stay for eternity. (Should I start a local eatery review page??)

Cheese, wine, olives and food Festival -
Last weekend we investigated and indulged in the heady atmosphere of a food festival. Cheese was the main produce, but many other incredible delights were on offer, including wines, olives & olive oils, meats, champagnes, oysters, herbs & spices and much much more. Obviously we had to sample as much as possible - there's nothing quite like wondering around with a glass of excellent Pinotage, while munching on loads of delicious foods. Our cupboards are now full with our many fabulous purchases too. :-))) 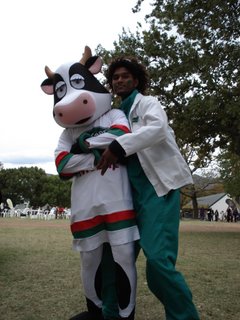 Ground breaking Great White Shark journey -
Nicole the shark (nick-named after Nicole Kidman) recently was satellite tagged and tracked swimming from Gansbaai, (near Hermanus) South Africa, to the western shoreline of Australia and back again in 99 days. That’s an epic journey of over 22,000 kms. Scientists speculate as to why she did this (the shark that is, not Nicole Kidman – dopey!!), but as this was the first satellite tagged great white from here, then this can only mean that this species regularly makes this incredible journey.

Famous shark cage divers who have recently been here are -
Robbie Williams and Leonardo DiCaprio, with the King of Jordon partaking in his second diving session.

A new shark diving adventure, without the use of a cage in the open ocean, has just started. Viewing blues, makos and many deep continental shelf species. Its mad and a fabulous experience.
There are now over 100 fabulous pictures to entertain you at this site.

Musical excellence -
Cape Town was the place to be last month, with a full day concert of over 15 international bands playing over 12 hours, on 2 enormous stages. We were graced by the mighty Metallica headlining, Fat Boy Slim, Stereo MC’s, Collective Soul, The Rasmus and many more.

With over 10,000 music hungry nutters attending on a very warm day and a 3 hour queue for the over crowded beer tent, it certainly made for a mad day :-)))

Cuisine extravagance -
One evening we went to the fabulous Spiers (wine village) and had a highly indulgent meal at their Moyo restaurant – dining capacity of 1,800 people at one time, with a great range of foods served buffet style. Ethnic dancers and bands in all sorts of colourful costumes performed and played acoustic African sounds. The atmosphere is further enhanced by tree houses with large platforms and tables, water fountains and sculptural modern art features, huge sofa and cushion crash out areas, large oak trees draped in tiny lights and English rose maze gardens. A great evenings entertainment.

Running the gauntlet -
With over 20 or so forest fires in the region during the summer months, I actually witnessed one at very close quarters near Hermanus. High winds pushed the fire along at great speed and flames rose 100’s of metres into the air near a Shell Garage. A police escort drove us thro’ the flames and I was very glad to see the other side of that mayhem. All rather scary and damn hot. Phew!!!

Poor old Table Mountain had another fire hit it in February, which swept right across the cable car route and thankfully stopped at Devils Peak.

Ever changing weather conditions -
The Capetonians have a saying - that you can experience many different weather conditions in one day here - and that has certainly been true recently. With one very hot day hitting the 35 degree mark in early February and the next week it’s down to 15 degrees. Completely barmy.
Winter is on its way now tho’, with wind and rain starting to be a regular feature and the sudden need to get out the space heater and fleeces, to start up my little fire place and drink some corking red wines. For those in the northern hemisphere - Have a great summer everyone.

Extra curricular activity -
This month I decided it was about time I did some extra studying and enrolled to do the Tour Guides course. It’s a complex set of exams and covers (nearly) every South African topic imaginable – history, culture, politics, economy, health & safety in the work place - right thro’ to tourism, animals, geology, plants, climate – and all points inbetween. This is no easy walk in the park either, as they estimate it should take about 8 to 12 months of hard home study to complete. Fingers crossed all.

Recent Percy Tours designer tours -
March was quite a month and over a 12 day period Percy Tours escorted – a group of 6 UK nurses; a group of 3 UK Uni students and a Canadian lady around the many delights of the Western Cape. A trip last week involved chauffeuring a birthday party up to a game reserve, with champagne on ice for all. Wine tours have been very popular too – 4 crazy British people, 4 Dutch student teachers and a party of bonkers Swedish students. Another exploration of the spectacular Kirstenbosch Botanical Gardens was a fab walk around, with the amphitheatre stage being fully constructed by the road crews, for 4 concerts by the king of soft pop rock Bryan Adams.

If you go down to the news agents today, you’re sure for a big surprise -
Yes Percy Tours has another juicier that hell advert in a gloriously glossy magazine – check out - Explore South Africa (issue 10) and fest your eyes on page 39. This magazine also goes into every SAA and Cathy Pacific airplane, is sent to over 300 travel agents in Europe, every foreign embassy in South Africa and given out free at the Durban Tourism Indaba in early May.

Cape Epic mountain bike race -
Just last weekend Hermanus was thrust into the international lime light, with the arrival of over 1,000 international mountain cyclists riding into town, for the Cape Epic Challenge. With their whole entourage of support staff, caterers, T.V. film crews on motorbikes and in helicopters, physios and following village of supporters adding another 3,000 people, the town was a buzz. The finishing line at the Hermanus, Old Harbour resembled a Tour de France spectacular. The whole race covered a distance of 921 kms over 8 days. 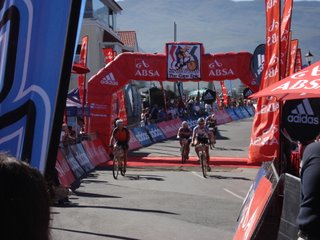 Come on – you know you desire an amazing holiday in South Africa with Percy Tours. Email us NOW!!!! :-))))