Even tho’ we at Percy Tours are not the greatest of club football fans, we sure do enjoy our 4 yearly indulgence of World Cup footy action, supporting the under-dogs to overthrow bigger footballing nations.

Being in Africa, we cheered on the African teams and much praise must go out to our 4 teams, who put some serious scares into the more established teams. So a big cheer goes out to Ivory Coast, Ghana, Angola and Togo.

With Germany hosting their perfectly organised games, many here in South Africa suddenly thought we had better get our skates on if we are to be ready to host our own World Cup in 2010. The South African press has (sadly) been slating its own country, by scare mongering, saying that we won’t be ready, but this Ladies and Gents is just sensationalised media propaganda aimed at doom and selling newspapers; when infact South Africa is already doing a mighty fine job at delivering infrastructural facilities – now!!

For example – South Africa already has its own World Cup logo designed and using it to full effect worldwide – when Germany only had its logo design ready 2 years before their games. South Africa 2010 merchandising is already on sale in many of the stores here too.

In Jo’burg, the Finals stadium is already very close to being finished, with official announcements stating that the doors will be to open for action as early as OCTOBER 2006. It’s a marvellous state-of-the-art complex, with the facilities being extremely ultra-modern and high-tech.

The new Gauteng railway is already under construction, (a full year ahead of schedule) – this is the high-tech railway between Jo’burg and Pretoria to assist the transfer of football fans between games.

Cape Town is also constructing a brand new train link from the airport to the city centre, covering the distance of 30kms. This is some achievement as South Africa has a diabolic public transport system (ie. its non-existent) and roads are, for the majority, the ONLY mode of transport. So we all commend this project.

Cape Town has decided to build its brand new 68,000 seater stadium on the site of the current Green Point stadium, which will host many games, including one of the semi-final games. Located within a short (and safe) 10 minute walk of the magnificent V&A Waterfront complex – with its multitude of top-class hotels, (like the award winning 5 star - Cape Grace, Table Bay and Arabella Sheraton), 100’s of shops, restaurants, bars, a large craft market, cinemas, open air amphitheatre, access to Robben Island and many other tourist attractions.

However South Africa’s national side (called Bafana Bafana) is another story altogether and are currently a miserable shower, in comparison to other mightier African footballing nations, but we have a plan – South Africa has just employed the fine services of ex-Brazilian coach Carlos Alberto Parreira (4 times manager of a World Cup team, including Brazil who won under his managership).

He will certainly have his work cut out, but we are all urging him on to do a stunning job at turning around South Africa’s team. As a matter of fact there are many South African team members playing in major European clubs and this can only be extremely good for the sides training, skills, experiences and enthusiasm to be able to develop the national sides competitive edge fast.

More information when we have it.

See you here for some excellent footballing and partying in 2010 :-)))

Cape Town has, for the last 5 years or so, been a mecca for the film and advertising industry, with over 48,000 filming licences being issued in 2005. The amazing scenery, long warm sunshine hours all year round, magnificent architecture and cosmopolitan cultures has attracted many to use the city and its surrounding countryside as back-drops for movies and photo shoots.

This is all about to explode into further attention with the proposed construction of the monstrous Dreamworks Film studios, about 15kms outside the city centre.

And on that note - Cape Town has been recorded to have the 5th best sky in the world, following the 1st expedition to measure the planets bluest sky. Measured by the UK’s National Physical Laboratory, readings were taken in 22 countries over a 3 month project to establish the place whose heavens had the best hue, brightness and colour.
Rio came 1st, Bay of Islands NZ 2nd, Ayers Rock Australia (Uluru) 3rd, Fiji 4th - San Francisco and London came last.

Afew weeks ago, while on life-guard practice at Muizenberg beach, a young man had his right foot devoured by a rather hungry Great White Shark. He has recovered very quickly and has had many offers of medical help from prosthetic limb companies and physios.

Well, as we all know, if we humans continue to invade the territories (ie. the sea) of many of gods marvelous creatures, then we can hardly blame them for “reacting”. I mean, would you get out of your car if you suddenly spotted 20 lions in Kruger Park?

NO – should be your answer, unless you are stark-raving mad.

Needless to say, Muizenberg beach now employs a team of shark spotters along the nearby mountain range, equipped with walkie-talkies and all important remote control siren alarm activators.

Flowers in the Cederberg mountains -

Percy Tours has been on “walk-about” and recently explored the mind-blowing area of the Cederberg mountain range, where at this time of the year the wild flowers bloom to create a huge natural carpet of colours. 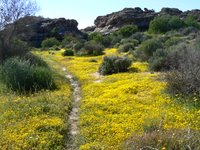 Not only is this area blessed as a Botanists heaven, but also there are San rock art paintings dating back to 6,000 years old. 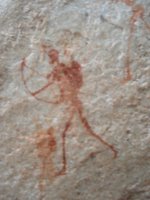 Whales on their summer holidays -

Hermanus is THE place in the world to get really up-close and personal with Whales. Greenpeace and WWF have stated that here is the best spot to view Southern Right Whales. Last weeks aerial count spotted 100 in the bay and last years record-breaking count was a staggering 138 whales.

Please check out Percy Tours new article on our Whales, on our “What to See and Do” page, by clicking the “Read More…” next to Whale and Dolphin watching.

This years festival happens between 22nd September and 30th September.

Over the winter period, Percy Tours enrolled and successfully completed the Cape Wine Academy wine college course and is now accredited as professionals in the Cape wine field.

Not only that, but many new and award winning wines have just been released onto the local market, making our Wine Tours a very popular activity for many tourists. :-)))

In fact mention has definitely got to go out to 3 Canadian ladies recently – who between them managed to buy a whopping 26 bottles on a one day Wine Tour with Percy Tours – that has got to be a record by any-ones standards, the minibus was choke-a-block :-))) – and guess what, they took the entire lot back to Canada (in newly purchased suitcases) safely and with a minimum of added tax at Halifax airport by the Canadian customs police. Not one bottle smashed. That’s a mighty achievement. Happy quaffing ladies. :-)))

And infact on that day we also added our other minibus in convey to Stellenbosch, with 6 crazy Brits on board, who also bought an astonishing load of wine too. The Wineries utterly loved us that day :-))) 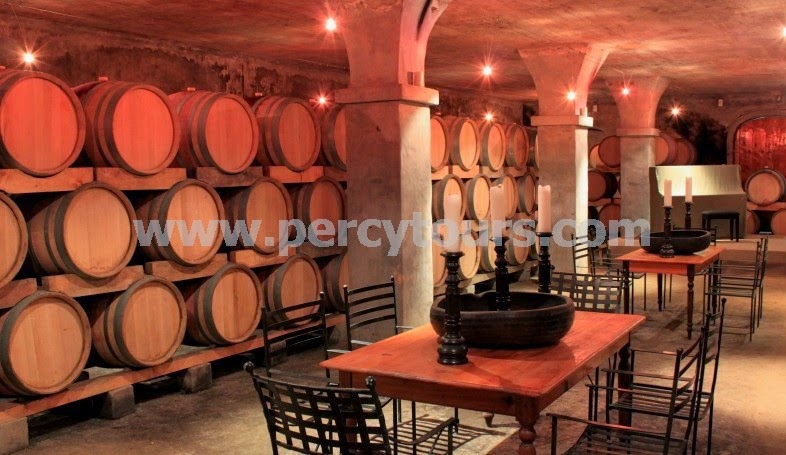 Percy Tours also has written a Wine article, to keep you all informed – check out our “What to See and Do” page and click the “Read More…” next to Wine Tours.

As you can appreciate, with all this intense action going on, we have been clicking our new 8 mega-pixel camera at everything imaginable – so check out our ever increasing excellent montage of South Africa by clicking our photo gallery website, where there are over 150 stunning pictures for you to consume – throw it onto “View slide show” mode for a full and delightful display –

Tours have exploded into action -

Yes, it may be only the start of spring and the tourist season but by heck has it been manic, with Percy Tours already completing 5 full-on tours in just 4 weeks (and many day trips too).

We are also starting to see a growing tread too – Single ladies on long holidays.
All power to them I say, as we have escorted 5 ladies around this marvelous part of the world on their own whirl-wind adventures. With just recently – one nurse from New York – Hi Amanda - one lady from Bombay – Hi Khushnuma and 3 ladies from Newfoundland, Canada – Hi Michelle, Carol & Christine – and recently booked, for a huge 3 week mammoth exploration of this incredible region - one lady from Saudi Arabia – Hi Louise.

But where on earth are all the guys? Do all the guys just consume way too much time spending their hard earned cash on cars, music, dvds, clubs and getting rat-arsed?? I have no idea.

Rain, rain, rain and some hot sunny days is what has occurred over the last 4 months, but this week has been much warmer and hit the 25 degrees mark today, so summer is here at last.

Our reservoir is now 100% full, so we are ready for the next 8 months of hot weather to arrive.

Other bits and pieces -

Hippos are now on the Red Data Books endangered species list, after 100’s have been shot and eaten in Zimbabwe.

On the Zimbabwe front – anyone travelling there should take note that the Zim dollar has suddenly just deduced 3 zeros off all their currency notes, so an old 250,000 note now equals 250.

Ginger Baker, ex-drummer of Cream and the Eric Clapton band has just bought a farm in Tulbagh.

Music – on my stereo at full blast are - Kasabian 1st album (can’t wait to hear their new album) , Arctic Monkeys (well done for winning the Mercury Music Award) and Hard-fi.

Percy Tours has now expanded its merchandising range to include - new t-shirts, jackets and sweatshirts and the new 2006 Percy Tours flyer is going down a storm at all our tourism partners establishments. :-)))

And a new and gorgeous addition to Percy Tours is the fabulously lovely professionism of - Ronel - who has taken over the duties of our tours in the Hermanus area. She is a Wine specialist and enjoys the incredible landscapes of South African nature and scenery.

Where are you now - For anyone that keeps getting constantly pestered by very annoying notifications and emails from www.wayn.com, I humbly apologise. Please delete these messages as this site has got to be one of the most un-user friendly sites in existence. It’s a complete nightmare to navigator or understand and I therefore apologise profusely for any inconvenience this site may have caused you. Please throw any emails you might get from these useless sods into your “block sender” folder, cos I want nothing to do with them, sorry, thank you and Cheers – DOH!!!!

That’s the lot for the moment troops – loads of love to all and chat every soon – Cheers :-))))