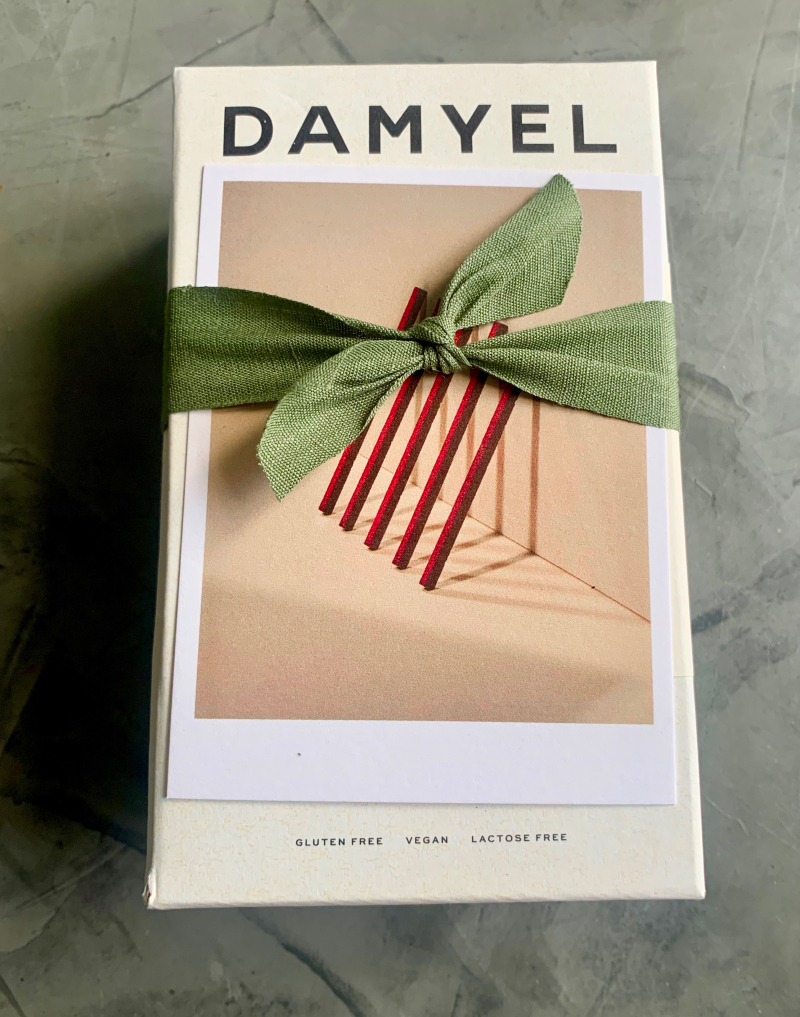 As many of you know, I was a chocolatier in New York City in the mid-1980s. I had my own shop called Rich-Treats, on West 55th St. between Fifth Ave. and Ave. of the Americas in Manhattan, and sold my own recipe, chocolate truffles.

After developing, tasting, and selling chocolates for a seven-year period, I developed a refined palate which I still use to taste and discern chocolate today.

At the end of April, I received a press release introducing a new line of vegetal/plant-based Chocolate Bars, Damyel. Although I am not vegan by any stretch of the imagination, I eat lots of pure fruits and vegetables and not much dairy, and red meat. Also, because I am diabetic, I carefully look at the ingredients before I buy any kind of packaged food.

Plant based desserts and pastries have come a long way in recent years and so greatly improved from the gummy and mostly bland products you would buy in the health food store or have at first generation vegan restaurants. Last year,  I wrote about the first plant-based boulangerie Land and Monkeys in Paris, which mostly replicates traditional French breads and pastries such as croissants, pain a chocolate, pain perdu, and millefeuilles without using cream, milk, or butter. At first, I was skeptical, wondering how the heck could they possibly replace the butter in a croissant, and after trying one, I was won over by the taste and flakiness.

Again, I was skeptical when I read about the Damyel chocolate bars. I have bought a few vegetal chocolate bars before and they have been disappointing, tasting waxy with a horrible texture to them.

I asked the publicist if they could send some samples of the chocolate and they generously sent five bars. I liked the simple packaging in appealing robin’s egg blue and vanilla, the elegant but bold typeface, and the green, grosgrain ribbon they were tied with. 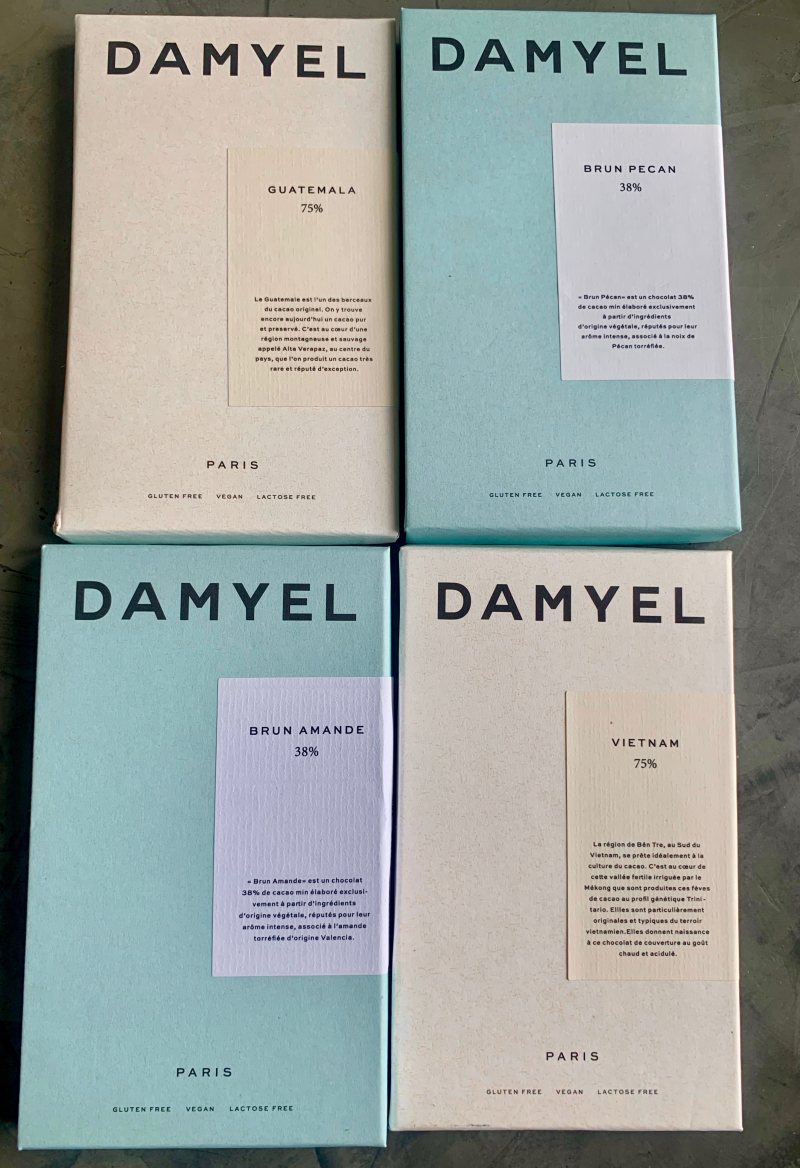 The thing I liked most about Damyel was that it perfectly bridged the gap between my two chocolate preferences. The two milk bars, one with toasted almonds and the other with pecans, both with 38% cacao, were delicious without being too sweet or having the sugary aftertaste with my teeth hurting after and the delicate roasting of the nuts was perfect. The Guatemala dark chocolate bar with 75% cacao, had an immediate but subtle coffee flavor, which won me over because I love anything with coffee flavor. There was an overall smoothness to the bar from Venezuela with a slight buttery texture. The only bar I wasn’t too fond of was from Vietnam with a 75% cacao ratio, which was too bitter and dark for my personal palate.

I learned the founder of Damyel, David Uzan, has been producing plant based chocolate for thirty years, and was way ahead of his time until others caught up just recently. He also is anti-sugar, so the chocolate contains almost zero traces of sugar.

Damyel has three shops in Paris and the one in the Marais on Rue Des Rosiers is also a kosher patisserie and confectionery shop. 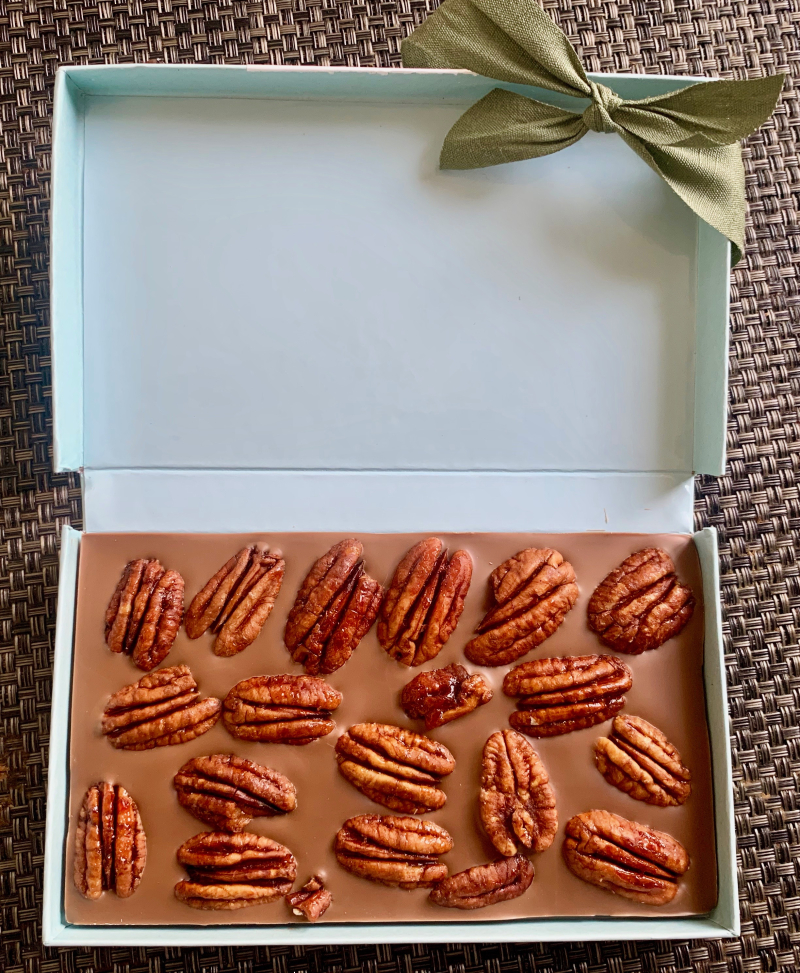 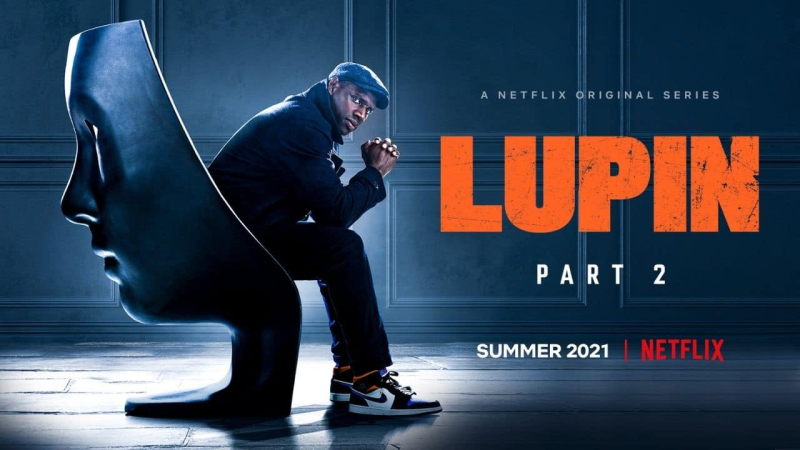 Here’s an invitation to watch a very special tour. I am doing my first live tour for France.fr outside of Paris and traveling to Etretat, Normandy to film part two The Footsteps of Lupin.

10 of the UK’s best beach cafes and b…
Drama and beauty, hot sun and cool su…
10 Health factors that you can improv…
How to Get Rid of Mice – 5 Methods
Eat, Love, Wait

This post first appeared on I Prefer Paris, please read the originial post: here
People also like
10 of the UK’s best beach cafes and bars
Drama and beauty, hot sun and cool surfing: how Madeira stole my heart
10 Health factors that you can improve with Delta 8
How to Get Rid of Mice – 5 Methods
Eat, Love, Wait
Cryptography Interface Design is a Security Concern
How to Boost Sexual Performance: 10 Tips for Males
Best Organic Coffees That Are Healthy & Enticing
وصفات لعمل الجوزية للعيد
What’s brewing in Chef Harsh Kedia’s chocolate factory?
101 Indian Street Food Dishes to Eat Before You Die
9 Ways to Design A Home With A Coastal- Hampton Vibe