If you are looking to Upgrade a paid Premium Economy or Business Class ticket to the next cabin, then you need a couple of thousand fewer points than before. Note that this comes after Qantas increased its overall upgrade pricing structure in November 2016.

The most common way to upgrade your Qantas ticket using points is through ‘Classic Upgrade Rewards’. This involves putting in a request for an upgrade and agreeing to pay the amount of points relevant to your upgrade.

However, not all requests will get approved, and whether or not your request will make the cut depends on a variety of factors.

The way Qantas determines who gets an upgrade is not simple and is the source of much confusion and frustration for those who want to use points to upgrade. In this article, we’ll explain how Qantas decides who gets upgraded and who misses out. 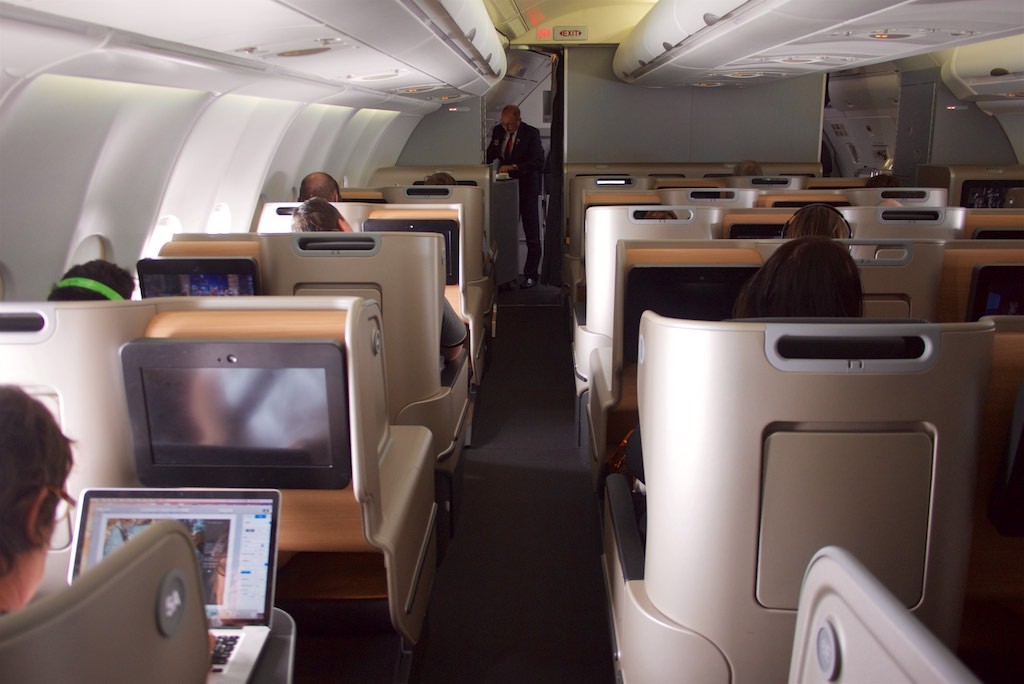 Upgrades are worth seeking out and a decent value use of Qantas Points if you are travelling on a paid fare, rather than a redemption.

If you put in an upgrade request for an international Flight, you will automatically be put on the Wait List. Once you are on the Wait List, particular rules will determine who is given priority for upgrades. These rules are covered below.

So how do Qantas determine whether there are upgradeable seats available?

Whether or not upgradeable seats are available on your domestic flights depends on whether there are any Classic Flight Rewards left on that flight. That is, if there are Business Class seats available to be booked on your flight through Classic Flight Rewards, you will be able to grab these same seats using Classic Upgrade Rewards.

So if you want to find out whether or not you will be able to secure an upgrade before you purchase your flight, you can search for Classic Flight Rewards on that flight. If they are available, your upgrade request will be approved as soon as you put it in.

This means that when it comes to domestic flights, booking early and being first is key to getting an upgrade.

Once the seats that have been allocated for Classic Flights Rewards are gone, all other requests won’t be able to be approved immediately and will have to go to the Wait List.

Having said that, although timing is key in domestic flights, status still has its part to play. That is because the availability of Classic Flight Rewards seats will depend on your status, with more seats being set aside for higher tier members.

But if Classic Flight Rewards are not available in your tier at the time that you put in your request, you might still have the opportunity to be upgraded through the Wait List.

For all international flights and for domestic requests that could not be approved immediately, the following priority rules will be applied when distributing upgrades.

Note that this factor won’t be relevant in Gold, Platinum and Platinum One since those classes automatically come with Qantas Club membership.

Finally, after status and Club membership have been taken into account, timing will determine who gets their upgrade request approved.

If you are in the lower end of the hierarchy, you might think that these rules will mean that you never get an upgrade.

However, it seems that that is not the case. Remember that Qantas has a number of upgrade programs including On-Departure Upgrades and Bid Now Upgrades. All of these only get considered after *all& Classic Upgrade Rewards requests have been approved.

The very existence of these programs indicates that it is not uncommon for all Classic Upgrade requests to be approved and for there still to be leftover upgradeable seats.

Speaking of leftover seats, a lot of people have reported that their upgrade requests were not approved but that there were Business Class seats available when they got on the plane.

This is due to a few different reasons:

These factors mean that it is quite common for there to be empty Business Class seats despite the fact that there were upgrade requests which were refused.

We’ve put together a case study to show how the priority rules would apply. Imagine four people put in an upgrade request for the same flight in this order:

On an international flight the upgrade priority would be:

Timing doesn’t play a part at all in this scenario because it is an international flight that follows the Wait List rules, where status trumps timing.

Conversely, if this were a domestic flight, timing would be key and each request would be assessed in the order in which it was received.

But who gets a seat would depend largely on the availability of Classic Flight Rewards. Let’s say there were three Classic Flight seats available, but two of those were reserved for Gold and Platinum members only.

But there would still be one empty seat left, which was initially reserved for Gold and Platinum members to book only. As the flight time approaches, this seat could be awarded to someone on the Wait List, according to the Wait List rules.

This would mean it gets awarded to Sylvia (Silver) because, although she was after Caleb (Bronze + Qantas Club), the Wait List rules put status above timing.

Upgrading flights that were bought with points vs cash

In November 2016, Qantas introduced a new policy allowing you to request a Classic Upgrade Reward even when you are travelling on a Classic Flight Reward fare that you purchased with points.

There are reports that a ticket purchased with cash would have priority for an upgrade over one redeemed with points, but we don’t have official word on that.

Also note that the number of points needed to request a Classic Upgrade Reward will differ and flights which are booked with cash will cost less to upgrade than those booked with points. You can find out exactly how much more by using the upgrade calculator.

Summing up: clear as mud?!

You can find the full terms and conditions for Classic Upgrade Rewards here. 16.2 and 16.3 are particularly relevant to priority, however, despite their length, you’ll be surprised to find that the terms are actually not comprehensive enough!

As such, most of the specifics in this article came from research and discussions with Qantas Reservations.

If you have had any experiences that do or don’t fit with this analysis, let us know in the comments.

This post first appeared on Point Hacks - The Best Frequent Flyer Deals & Offers In Australia., please read the originial post: here
People also like
30 Cheap & High ROI Home Renovations (And 5 Costly DIY Mistakes)
Choosing a Garage Floor Epoxy Metallic Finish
how stress affects your skin and how to manage it
9 Real Estate Trends To Watch Out For in 2023, according to Experts
How To Publish An App To The Google Play Store
Woman in Love
WHY THE DALAI LAMA HAS AN ENGLISH ACCENT
NEW 2-in-1 Retractable Cat Wand Toys Gravity Pet Laser Tease Cat Stick Self Hi Toy With Ball
The Benefits of Hiring a Professional Hand Piler for Your Home
Startup Fashion Week Returned For Year Nine in Toronto - @StartupFW
Upgrade Game Day with These Snacks
Satisfaction of the Mind Stems From Comparison