A virtual tour to Rome: Explore the eternal city and its poetic romance with history!

Rome is deemed as the center of the world for centuries, the birthplace of Caesar, home to the Catholic Church, full of ruins, history, and delectable food! Let’s take you on a virtual tour to Rome!

It is commonly said that there is no other place like Rome on earth, and rightly so! You’ll walk down the street and see ruins dating back to thousands of years right next to modern buildings. It is a beautiful fusion of ancient and the modern art.

A visit to this place is like stepping back in time and somehow still having hints of modernisation. This wonderful virtual tour to Rome will show you the history of the modern world while giving you some of the best food you’ve ever had in your life.

The city is filled with life, beauty, and charm. Let’s take you on a Virtual Tour to Rome for witnessing this eternally beautiful city!

On our virtual tour to Rome, our first destination is Colosseum. It is the largest amphitheater ever built. It’s made of concrete and stone. It was designed to accommodate an estimated 80,000 visitors and was used for gladiatorial contests, public spectacles, animal hunts, executions, reenactments of famous battles, and dramas based on classical mythology. However, earthquakes have caused great damage to the structure over time. 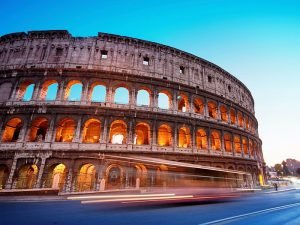 Built in the honour of the first king of unified Italy, Victor Emmanuel, this is the largest monument in Rome and was controversial since its construction destroyed a large part of the hill and the medieval neighbourhood. The terrace of the building offers a panoramic view of Rome. Spanish Steps are a monumental stairway of 135 steps, built in the 18th century by a French diplomat who intended to connect the Spanish Embassy and the Trinita de Monte church. This widest stairway in Europe quickly became one of the major Roman attractions. Every spring, some part of the steps is covered with flowers. 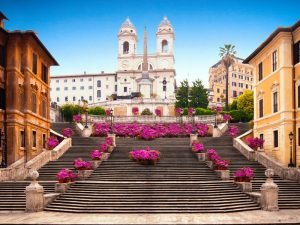 Vatican City is an independent state since 1929. It is located within Rome. Saint Peter’s Square and Basilica is a must-visit too! It is absolutely worth seeing! 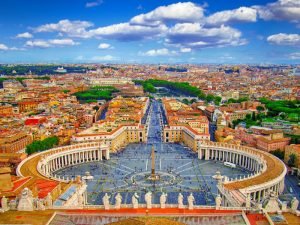 Touring around can make your tummy ask for some mouth-watering food. Roman food culture is bold, delicious, and steeped in history. On our next stops in this virtual tour to Rome, let’s get into the punchy flavours of Romans and their love for seasonal ingredients.

A good day in Rome starts with an Italian coffee but if you really want a good kickoff, visit a local pastry or coffee bar and accompany your espresso with a maritozzo. All roads may lead to Rome but the best route is via Gastronomy! If you are craving something quick and tasty, a slice of Italian pizza is the right choice.

Suppli is a typical Roman dish, a little messy but downright delicious. It’s the king of Roman street food. The dish is a deep-fired rice ball with tomato sauce, beef, and mozzarella. Another fried dish proved that no place in the world does fried food to the level of Rome. Fried zucchini flower has become one of the city’s signature dishes.

If you are looking for Romans’ classic pasta, Cacio e Pepe and Bucatini all ‘amatriciana are the best to satisfy your pallets.

If you are looking for dessert after a great warming meal, Italian gelato comes in many flavours –  Cioccolato, panna cotta, frutti di bosco, fragola, limone and more. Rome gelaterias can please even the most sophisticated taste lovers.

Gelato is created by skilled artisans who take pride in their creations and no artificial colourings or flavourings are used in authentic Italian gelato.