Top 5 Places To The Golden City of Jaisalmer

Best Places to the golden city of Jaisalmer

Jaisalmer is a world heritage site known for the hue of gold that spans the entire city. But do you know the places you should visit first when the city greets you with a hospitable embrace? Read on to find out!

Built in 1156 AD, Jaisalmer Fort is considered one of the most famous landmarks of the Golden City. The fort was commissioned by the founder of Jaisalmer, Rawal Jaisal, and the fort is also known as Sonar Qila.

This is a big fort speckled with antique and merchandise shops, hotels, houses, and restaurants. If you’re planning to visit Jaisalmer Fort, make sure your camera’s battery is full, as you’ll be clicking away a lot of beautiful views.

Patwon ki Haweli is a group of five hawelis planned and built by a wealthy Jaisalmeri banker called Guman Chand Pawa. After his death, his sons finished building the hawelis, which took almost 55 years. A much more recent haweli built 300 years ago is Salim Singh ki Haweli. As the name suggests, the haweli was built by Salim Singh, the Prime Minister of Jaisalmer. The roof is arched and filled with beautiful carvings which shape it in the image of a Peacock. Khaba Fort is another captivating fort in Jaisalmer. It now stands a bit creepy and has various stories of it being haunted, like the Bhangarh Fort.  The fort, once inhabited densely by Paliwal Brahmins, was suddenly deserted overnight for reasons unknown. The fort has a museum and ruins of homes of the families that mysteriously deserted the stronghold.

Surya Gate can be found at the mouth of the Jaisalmer Fort. It stands atop the Trikuta Hill with four gates that have to be crossed to get to the fort, namely, Akhai Gate, Surya Gate, Ganesh Gate and Hawa Gate. Surya Gate is adorned with carvings and on each side there are small merchandise shops. 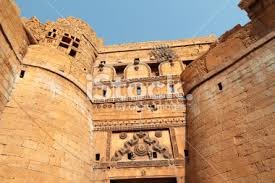 The post Top 5 Places To The Golden City of Jaisalmer appeared first on Trip Experience Blog.

Top 5 Places To The Golden City of Jaisalmer