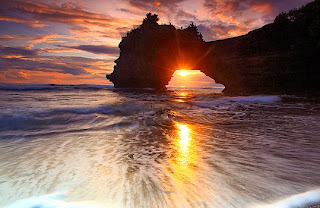 Lombok: the quieter side of Bali

It is the end of the rainy season in Lombok, but the storm is yet to break. The air, heavy with moisture, collects in my elbow pits and rests on my top lip like milk. Even the breeze is dense and sticky. A horse and cart rattles along the narrow road and then a scuffed moped, its driver resting on a cushion of unplucked chickens. Is this small, self-sufficient volcanic Island really becoming, as its embryonic tourist board suggests, the newBali?
Twenty minutes away by air, Bali itself is bursting. This year the country is targeting 7 million foreign tourists – traffic jams block the streets, Hotel complexes have been built over paddy fields, visitors tweet about the pollution. But Lombok, one of 27 provinces in the Indonesian archipelago remains, if not untouched, then certainly unbruised. In 1966 50,000 people died of famine on the island; one hopes the slow infusion of foreign wealth will prevent that happening again. Over the years the island has been primed for tourism annually, but it's only now, as plans for an international airport and a $600m project to put 10,000 luxury villas on Lombok's southern coast take shape, that the industry is showing real growth – boutique hotels spread tastefully around the coast.
After a 13-hour flight, my boyfriend and I take the three-hour connection from Singapore to Lombok, where we queue for $25 tourist visas and emerge exhausted into the dusty wetness of a busy dusk. It's a two-hour journey to Sekatong Bay, where Cocotinos recently became the first hotel to open on the island's east coast. We drive through Mataram, the island's capital, then out through the villages, where covered platforms line the roads and act as parasols for Lombok's weary workers. From shelves on every roadside house children sell mismatched glass bottles of moped fuel and packets of nuts. The hotel's rickety pier strikes through the dark sea like a fallen Christmas tree, and by candlelight we eat our first nasi goreng, a fried rice dish that's served for breakfast, lunch and dinner. 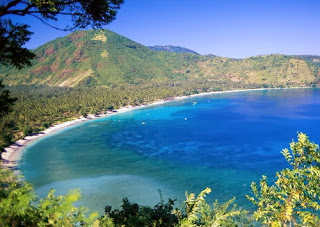 A day later, we travel west to Senggigi, the closest thing Lombok has to a holiday resort. Every drive here is in the shadow of Mount Rinjani, an active volcano that tourists can camp out on to photograph the sunrise and honeymoon energetically. We pass paddy fields where women stand in conical hats, casually thrashing the rice while their babies run naked through puddles. From a distance I see a glint of silver in the road – as we approach I realise it's a blanket scattered with tiny drying fish. It looks like a sequined jacket discarded after a party. 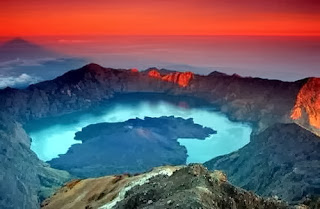 Senggigi is a concrete collection of karaoke bars and red-chested men. This is what Lombok might look like if the island wasn't 80% Muslim – the Hindu culture in Bali is more welcoming to those seeking all-day happy hours and bikini competitions, but it is Lombok's modesty that locals hope will ensure that it doesn't crumble under the weight of tourists. We stay at one of Senggigi's mid-priced hotels, Qinci Villas, where the tide comes in so far it splashes diners in the restaurant. Hawkers shout up from the beach, selling their local pearls and sarongs at "special sunset prices". Restaurants down the hill offer a taxi service from the hotels, which we use to visit Warung Manega, a seafood restaurant sat snugly on the shore. They barbecue fish over coconut husks and serve it accompanied by colanders of rice and salads of water spinach – a huge platter of squid, king prawns and fish costs around 100,000 rupiah, less than £8. Tip: if, in your excitement at selecting the biggest prawn you've ever seen, you drop it in the sand, rinse with Bintang beer. It'll still taste better than most dinners you've enjoyed.
The posher hotels, we learned that night, cost more because they're built further away from the mosques – mosques that broadcast their call to prayer very loudly from 4.30am until breakfast. A blogger on the island recalls a recent story in which a hotel owner "dared to suggest to a local village meeting that perhaps they could turn the volume down a touch on the prayer chant. The police subsequently arrested him." The blogger continued: "He received death threats and his villas were looted. To date no one has been arrested for the destruction to property. Lombok is a whole different kettle of fish from Bali."

A sense of calm at Jeeva Klui.
At Qinci, mosquitos slap juicily against the mirror, there are no televisions to watch when the storm finally breaks and the air conditioning spits an oddly urinary smell through the vents. We're happy to move on round the coast, past stands selling grilled jagung bakar (corn on the cob) and a bar where a covers band improves U2 songs by slurring the lyrics into a stream of pure emotion, to Jeeva Klui, a boutique hotel that shimmers with calm. In the morning we get a lift into the local market – on the way, we're reminded that to point with your left hand will cause offence, and I feel as foreign as snow, a feeling that returns whenever I meet locals, my hulking white body towering above their 5ft heights.
At the market, women sit on the floor rebalancing their bananas and komak beans in the shade of an umbrella. Chillis (the Indonesian translation of Lombok) cascade from baskets, topless boys hack coconuts into neat skull-shaped hunks, rice and salt are weighed by hand and, inside a vast dark warehouse, meat is presented red and semi-alive on heaving trestle tables. The island grows everything it needs, and each village has its speciality: one produces tofu from its bean curd, another makes dried shrimp paste, another is famous for its salted shark. All are available here, alongside cages of live cocks, being sold not-so-secretly for fights. We walk past the cidomos (the tiny horses and carts) and through a fisherman's village, where thatched shacks squat metres away from the sea and narrow boats (jukung) are tethered after they've delivered their red snapper.

Gili Eco Villas on the island of Gili Trawangan.
The tiny Gili islands are visible from the shore, with Gili Trawangan (the most developed) a popular backpackers' destination. We skid across the sea in a rickety speedboat and hail a cidomo on the jetty. There are no cars or fresh water on the Gili islands, but to make up for it there are plenty of Australian teenagers singing Katy Perry songs. Our dwarfish horse totters us drunkenly to Gili Eco Villas, a collection of houses at the far end of the island where the tiny rooms contain little more than a mosquito-netted bed. On the beach, snorkellers and divers coo over coral, and we watch clouds gather from a bar on stilts in the water. When the storm comes, it is so strong it cuts the electricity, so we sit in the dark under a wall-less roof and watch lightning rip across the ocean. The outside bathroom is alive with frogs and the mirrors steam up with thick tropical heat. When we get hungry, we pick through the forest, pausing in a wet huddle between flashes, and eat nasi goreng under a bamboo canopy.
In the morning, everything is sodden, and everyone is asleep. Back on the west coast of Lombok, another stormy night in the eccentric Puri Mas hotel means we are tied to the balldancing-themed bar, where a local band persuades my boyfriend to join them in hours of Elvis covers.
Tugu Lombok, our sixth hotel, looks like it was carved by talented giants. Spectacular and beautifully grand, with colourful traces of Dutch colonialism, it features ancient statues of Hindu gods scattered among the sun loungers, and the sea is clear enough to see blue fish nodding past your knees. We're woken by birdsong and pad into the outside bathroom with its huge copper bath. 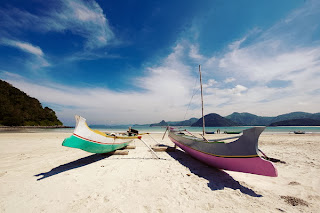 We spend a final night around the bay at the famous Oberoi. The island's first luxury hotel is a temple of elegant excess, where a waiter watches sunbathers discreetly, sweeping over with sorbet on banana leaves when they start to sweat. The air is cleaner here, the money evident. Cycling out of the gates past the corrugated iron shacks that make up nearby villages, I feel as though my comparative wealth is visible like a guilty blush. I'd heard stories about Indonesians further inland throwing rocks at tourists, but we encounter only curiosity from the women resting by the road and excitement from the uniformed schoolchildren who run alongside our car, thumbs raised. Our final meal, a rijsttafel – an Indonesian feast – is served over the water in a candlelit hut. By the pool an orchestra of local children pluck traditional (if atonal) songs while women dance slowly.
On the way to the airport we stop in Pusuk Forest, where grey monkeys swarm by my feet for peanuts. The larger ones swipe the nuts away from the smaller ones, who lurk, hoodie-like, by the car. As we drive away, I'm convinced I see one swear.

for lovers BECKPECKERS you do not need to worry we will always be faithful to you for helping with a tour guide with you, please contact us immediately for sure we will serve you