Tags: fort
July 30th 2015
View original
A three day weekend is not something that you get too often and hence is neither to be wasted and nor were we in mood to do so. Once I checked the holiday calendar by chance, mind started wandering to choose an apt destination for the 17-19th July weekend. When we sat down to plan the trip we had to work towards the selection by eliminating the options. First to come to mind were obviously the hills which are plentiful around Delhi but then landslides are a consistent fear around this time of the year. Next we thought about the heart of India – Madhya Pradesh. But again it was shot down owing to heavy rains which were delaying the trains indefinitely. So, finally the safest options available were all in Rajasthan and hence we finalized our destination from the state – Chittorgarh and Udaipur over a three day trip. Soon the plan was set to be in Chittor by Friday afternoon and spend the entire day exploring the city before moving to Udaipur for the second leg of the trip.
As planned we were at the Hazrat Nizamuddin Railway Station on Thursday evening to embark on the journey onboard Dehradun Express. Now this train itself is a convoluted combination of convenience and frugality. There is this mainline train which goes from Dehradun to Mumbai and then there is another train which is from Meerut to Mandsaur (a town in Rajasthan). Since both these share a large distance on their respective routes the later piggybacks on the former until Kota. We boarded the train at about 10:30 PM and thus started the journey which we both were looking forward to excitedly. We woke up in the morning as the train was pulling into Kota Junction at about 8 AM which could very well be called a layover for our train ride with over 45 minute stoppage. But this was an interesting stoppage as the train jolted and hustled to disassemble the piggybacking coaches out of the main train rack which was to proceed to Mumbai. Most of the passengers had already disembarked and the coach only had a few “daily passengers” in a couple of coupes apart from us. This made the journey interesting with almost the entire coach to us. Finally the train rolled into the destination station at about noon and we got down for a day long excursion of the Fort City – Chittorgarh. After a short break at the rest house for freshening up, we began site-seeing of the city. 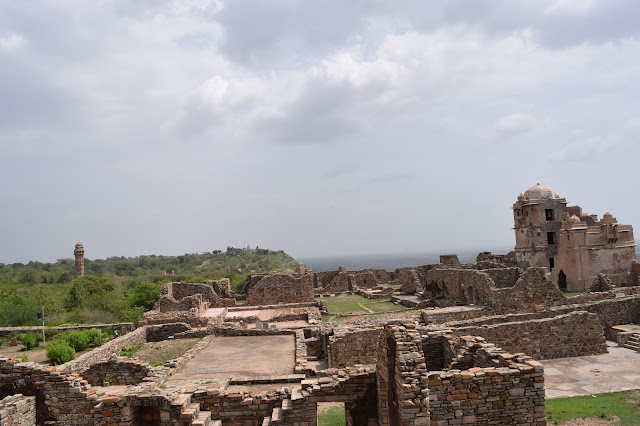 Chittorgarh, also called Chittor in short, is basically a township developed in and around the walled structures of the fort. The city was capital of Mewar under the rule of Rajputs until the 16th century when the capital was shifted to Udaipur. The primary tourist attractions of the city revolve around the fort which is one of the biggest forts in terms of the area covered with over 700 acres under its premises. Though Daulatabad Fort is considered most defensible and Kumbhalgarh has a longer periphery, Chittor fort has its own significance in the history which is enunciated by the famous saying in fables – “Garh to Chittorgarh, baki sab gadhaiya…” The fort, with average height of about 400 meters above sea level, gives an image of fish surrounded by 16 kilometer periphery, when observed aerially. With over 84 small and large water bodies within the fort, it has earned the nick of being “the Water Fort”. The fort also has about 113 temples. As we moved towards the fort we found out that there are 7 gates called “pols” that one needs to pass through before entering the structure. Once we were at the final entrance, we got out tickets – per person and for the car – and also hired a guide to take us around the fort. The guide, Mr. S L Sharma, was an ex RTDC employee and his age did not seem to hamper the enthusiasm to show us around and introduce us to the fort.

The fort was built by the grandfather of Maharana Pratap who belonged to the Suryavanshi clan i.e. those who are believed to be the descendants of the Sun God. Their beliefs and traditional values are evident in the architecture and construction of the fort. Most of the entries, including the front entry of the fort, are east facing to allow for the first ray of light to enter the premises. Most structures have three parallel gates called Tripolia – believed to be made each for Brahma, Vishnu and Mahesh, the three Hindu deities. Various domes and gates use forms of lotus and rising sun for designs and decoration. Though Maharana Pratap did not get a chance to inhabit the fort as he spent most of his time in battles to win it back, his son got the possession of the fort in a treaty with Mughals which restricted any repairs of the structures. The fort was finally repaired during British rule.

The first point of the fort that we visited was the Kumbha Palace or the king’s residence. The shambles of the structure is still lively with glimpses of royalty effusing out of each corner. The expanse of living quarters, the dedicated corridors, escape caves and luxuries are all a statement of the lifestyle of the kings of that time. The king’s palace has a huge courtyard where the public meetings, called Deewane Aam” were organized. This was a open courtyard established by Chitrangdha Maurya. Adjoining the Kumbha Palace is the queen’s residence which too is a marvel in itself. There is one particular fable around these quarters which is very popular. It relates to the nanny Panna who replaced her own son to save prince Udai Singh and parceled the prince to the fort of Kumbhalgarh. This was also the venue of the first “Jauhar” of the fort where Rani Padmini set herself on fire. Jauhar was a practice prevalent in that time as part of which the queens and other ladies in the fort used to burn themselves alive whenever their husbands died in wars to save themselves from the enemy. Right across the palaces, one can see the incomplete wall trying to divide the fort in two equal parts. This was an attempt by 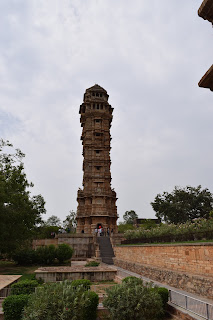 Vijay Stambh or the Victory Tower was built by Rana Kumbha after victory against the forces led by Mahmud Khilji. This giant war monument is over 37 meters height spanning across 9 stories and its takes about 157 steps to reach the top. The construction of this tower started in 1448 and took 10 years for completion. Ironically, right beside the tower is the location of second Jauhar led by Rani Karnawati, after the siege of the fort by Bhadur Shah, the Sultan of Gujarat. A few steps below from this point is Gaumukh which is a continuous stream of water falling onto Lord Shiva’s shrine established in a small cave. There is a water reservoir, now believed to be holy pond, besides the shrine which used to be main source of water for the fort. After ascending back from the pond, we decided it was time for a break and we proceeded to the RTDC cafeteria right opposite the Victory Tower for some light snacks and tea. A few moments of rest at that time were nothing less than divine intervention.

After the break we continued the tour with a stop at the Kali Temple. This was originally a sun temple but was destroyed during the attack by Alauddin Khilji. Next we passed through the Senapati Bhawan or the Commander’s Building. The adjoining pond is popularly called as Patta Ka Talab named after then Army Commander. Third and last jauhar of this fort was performed in this building after Akbar defeated the then king as there wasn’t enough time for ladies to move to other location. Next we visited the Padmini Palace which effuses femininity with its beautiful gardens and decorative windows. This is the same palace where Alauddin Khilji was allowed a glimpse of the Rani Padmini (also called Padmavati) as a compromise to save the kingdom. The former was in awe of the queen and was ready to attack Mewar to own the queen. A specific point was chosen within the palace such that the reflection of the queen was visible in the mirror but the actual location could not be seen even if the viewer turned back. This location is still available to be observed and is definitely an interesting site.

We took a drive around the fort periphery as a concluding glimpse of the monuments and surroundings. On the way we passed through the barracks – the residences for the armies, the training grounds for soldiers and other memorable points. We stopped by briefly by the Maurya Tank which is mythological called Bhima Lat Kund. This comes from a fable of the time relating to Pandavas coming to this pond to caoquer the Paras stone (known to have powers to turn everything to gold) which was in possession of a saint. Saint had put up a condition that Pandavas could have it if they built a wall within a day. As the wall was near completion, saint used cocks voice to indicate end of the day which angered Bhīma. It was a kick in anger by him that created this pond. We also visited the Kirti Stambh or the Jain Tower built by a merchant and dedicated to Rishabha, the first Tirthankara of Jainism. 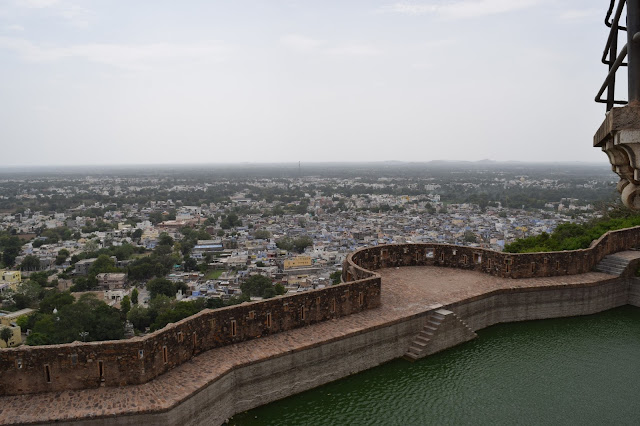 As we were parting goodbyes with our guide, he elucidated the rich history of the fort along with the nine forms of devotion that are apparent from the fables. These relate to various relations and beliefs and cover a gamut of emotions. It was definitely a day well spent delving into the history of the region and observing the richness inherited from our ancestors. The city had its most glorious days until the 16th century when the capital was shifted. Udaipur had an upper hand when next capital was chosen as it had strategically important position in term of defensibility because of Aravali Ranges. While the fort was self-reliant in most resources what lacked was unity and technology. It was lack of these which brought this under attacks at various points of time. No able administrator after the death of Rana Sanga added to the woes of the kingdom. Still, Chittor is indeed a story of courage, bravery, devotion and patriotism.