Tags: race
February 29th 2016
View original
I'm back after a while. Work is keeping me busy and I know that isn't a very good excuse. Anyways one of the fun things I have done in a while is gokarting. I did try it once in India and that was an outdoor one. 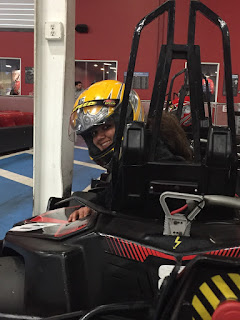 I planned a gokarting event at K1 Speed with my colleagues. Everyone was interested to begin with but as usual people started dropping out as we were nearing the actual day. In the end it was Vishnu and I along with my colleagues Ronnie, Sulekha and her husband.
K1 Speed does not accept reservations for groups smaller than 8. This meant we had to show up there and wait for our turn. It being Friday evening, the wait was quite long. I think we waited almost an hour before we could gokart. 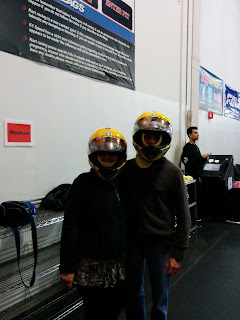 Each Race consists of 14 laps and the price for each race is $20. If you buy more than 1, it gets cheaper. We decided to go for the 3 race package which costed us $45 plus a $6 license fee. We were given helmets and assigned specific carts. The actual race was a lot of fun. The track has lots of twists and turns which adds a lot of thrill to the race. There are employees with flags to tell us to slow down or give way to other carts depending on the situation.
The wait between each race was a little annoying and I wish they happened one after the other. To add to it I had not eaten before so by the time we were done, I was starving. On the other hand, eating right before the race would also not be a good idea given all the sharps turns and curves you have to maneuver.
Despite that I enjoyed the actual experience of the race. I wasn't racing to win. My goal was to just have fun and I did pretty well. Vishnu managed to win one of the races which is pretty impressive. It was a nice friday night activity with friends.
What: Gokarting
Where: K1 Speed, Santa Clara
Cost: $20-$45

Prepare For Victory
What Marathon Running and Successful …
Highlands, Buttermilk Opening and Sum…
Does a Political ad Create a Problem …
The 12 Types of Content Banned by Goo…