Tags: sunset mountain ranges fallsyosemite national park amazing natural places special effects created amazing special effects river amazing natural mountain
May 8th 2014
View original
Our world is full of spectacular displays of splendor of nature - for example, rainbows and sunsets, and not so impressive - for example, all of the same rainbows and sunsets, which you admire in the third or fourth time. However, nature can surprise even the most discerning lovers of the open air, if of course they are lucky enough to be at the right time in the right place. 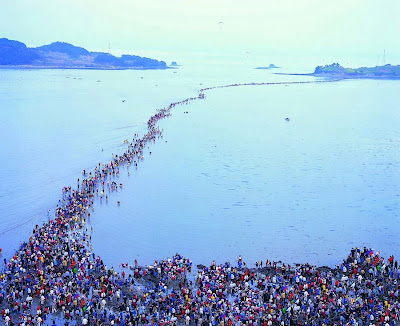 No, it's not lava - so it would be too easy. Horse Tail Falls (Horsetail Fall) lights up every February: for two weeks, the sun's rays fall on it at an angle so that the waterfall looks like he is out of the flames - a phenomenon often referred to as ognepadom. Usually ognepad can be observed only for ten minutes at sunset when the clouds do not obscure the sky.
Ognepad difficult to photograph, but, nevertheless, it has been a lot of pictures, among which there are also fake: in Yosemite for almost a century, from 1872 to 1968, the year a group of people were going to stir up a giant bonfire and then discharging coals from a cliff Glacier Point.
National Park rangers eventually asked people to stop this occupation for some mysterious reason - in fact, this is why people can not throw burning coals from a rock? So now I have to be content with the present ognepadom in that fabulous moment when the sunlight dancing on the water.

2. The miracle of Moses, South Korea:

Under the "miracle of Moses" refers to the fact that for a very brief period in the spring you can walk along the coastal waters around the small South Korean island - get a grasp: you can walk on water.
About twice a year during the period from March to June, the Yellow Sea coastal line is exposed due to the action of tidal forces, resulting in the place where recently prevailed sea, there is a strip of land about three miles in length, connecting the two islands - Jinda and Modo. Aisle width of 40 m is still open for only an hour, and at this time, thousands of tourists to enjoy the rare opportunity to go through the sea.
On the island every year there Jindi four-day festival dedicated to this event. "Moses Miracle" phenomenon is named after a similar event described in the Bible - Moses made the waters of the Red Sea in different ways: it can be said that the Bible indirectly contributed to the development of the local tourism industry.
We Koreans have their own story about the origin of the phenomenon of the Yellow Sea: it says that once bred on the island of Jindi many bloodthirsty tiger, then all the people who lived on the island fled to Modo, believing that there is something no tigers - all except one old women who forgot to bring. She prayed to the God of the Seas, that he created a way, and she, too, could go on Modo - God of the Ocean heed to her request, and the woman was rescued. However, it can be assumed that the God of the Ocean had a specific sense of humor or lack of knowledge about the local fauna - the Tigers did not afraid of the water.

Most of the year the river Cano Kristalis in Colombia is an ordinary river: the water in it is clean and clear, and the bottom overgrown with green moss - beautiful, of course, but nothing special. However, within a short period from September to November, the river is starting to look a little different.
Fall, due to the heat and sun, dull green moss thrives with every imaginable shades like quaint carpet - Cano Kristalis gets so crazy paint is popularly given her the nickname "river flowing out of Paradise." However, to see this beauty, will go a long way: to fly in a small Colombian town of La Macarena, then take a short trip on the boat, and then walk to the river walk on the wild trails.

Dolomites in the north-east of Italy have the unique property to become pink in the rays of the setting sun - a phenomenon locals call Enrosadira (Enrosadira), which literally means "to be pink." Every evening, the western slopes of the mountains are painted in a variety of warm colors - from bright yellow to dark red or purple.
Such an effect is possible due to the unusual structure of the mountains: the Dolomites are made from the remains of ancient marine animals and magma from volcanic eruptions.
The most impressive phenomenon appears in the summer, so if you've ever wondered whether God can paint the world on your own, add a summer trip to Italy to your list.

Green Lake in Austria is something more than just a body of water, lost somewhere in the middle of the mountain range Hochschwab, although most of the year the depth of the lake is less than two meters, and around it grows a lot of greens, and there are hiking trails that make this place ideal for hiking.
But so it is only in the winter, while the snow lies on the slopes of the mountains in summer the snow melts and the huge amount of water cascading from the lake flows into the valley, creating a wonderful water world.
Now the depth of the updated Green Lake reaches about 12 meters - the water is so pure that if you do not notice the ripples, the first did not even realize that all the paths and greens are under water, and benches and bridges look like toys in the fish tank.
Since the flood, which in most places on the planet is becoming a catastrophe for the people, for the benefit of Austria soon - in the summer here attracts hundreds of tourists, mostly divers. And really - see underwater landscapes that seem to be a common ground, it is extremely interesting. A peak depth of the lake is in the middle of summer, so the next time you plan your vacation will become, so keep that in mind.

Clouds in the conventional sense rather boring - simply of condensate, the whole day traveling across the sky. But in the skies over Australia's different: it is common to see a truly unusual clouds - Morning Glory.
These clouds are composed of long tubular concentrations of water vapor and sometimes reach 1,000 kilometers (no, this is not an error) in length and 300 m in height. In most corners of the world, they are extremely rare, but in the Gulf of Carpentaria in the dry season from August to November are the clouds - are frequent visitors.
During this period, morning glories appears there every few days, and the entire season near the Gulf of duty pilots, for a small fee ready to take tourists on board, so that they looked at the Gloria from a height. The spectacle is worth it to climb into the sky - the air from the lower part of the cloud rises up at great speed, and as a result there insane beauty turbulent eddies.

Abstract Art: What Is So Special Abou…
Carpenter Ants in House
The Wonders of Pili Oil


This post first appeared on Stunning Places, please read the originial post: here
People also like
Abstract Art: What Is So Special About It?
Carpenter Ants in House
The Wonders of Pili Oil