A full 36 hours, 36 days, or even 36 weeks could be spent exploring the thousands of Buddhist temples, Shinto shrines, Zen gardens, palaces, pagodas, parks and walking paths in Kyoto, the former imperial capital of Japan. So it’s little surprise that the most common complaint about the enchanting city is that there are too many tourists, especially during the spring cherry-blossom season. To avoid crowds, consider seeking out local haunts in far-flung neighborhoods, all within reach thanks to an extensive public transport system. You’ll quickly discover that many of Kyoto’s most rewarding attractions can’t be found in any guidebook. At least not yet.

It’s easy to bounce from temple to temple until they all blur into a muddled mass. To prevent this overdose, be selective and focus on a single memorable spot, like Rengeo-in temple, commonly known as Sanjusangen-do (admission, 600 Japanese yen, about $6 at 100 yen to the dollar). The temple’s main hall, nearly 400 feet long, houses an unforgettable sight: a gigantic statue of Kannon, the Buddhist goddess of mercy, flanked by 1,000 human-size Statues. The golden statues, each with 42 arms, carved from Japanese cypress in the 12th and 13th centuries, still look immaculate.

Adapting ancient crafts to contemporary tastes is a skill some local artisans have perfected through a venture called Japan Handmade. The project is a collaboration between the Danish design studio OeO and six small Kyoto-area companies, each rooted in a traditional Craft, from woodworking to metal-knitting. One of the participants, Hosoo, founded in 1688, produces luxurious fabrics traditionally used to make kimonos. Today the patterned silks also adorn upholstered armchairs and high-top sneakers (a collaboration with the fashion designer Mihara Yasuhiro). Find these modern creations and Japan Handmade’s range of covetable items — glazed porcelain trays, cypress-wood Champagne buckets — at the new House of Hosoo showroom in Nishijin, the city’s historic textile district. Because visits are by appointment only, exploring the tatami mat rooms feels like touring a private museum. 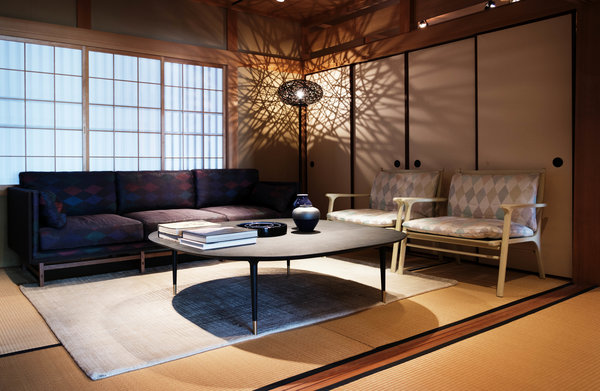 House of Hosoo. CreditKo Sasaki for The New York Times

Most locals don’t blow their yen on outrageously priced kaiseki dinners, and neither should you. Instead, secure a seat at Hitomi, a casual yakitori restaurant that is beloved for its warm service and delicious grilled things-on-sticks. Bar seats afford front-row views of the smoking grill, where every part of the chicken, beak to tail, is cooked with care. Don’t miss the tsukune (ground chicken “meatball”), crisp kawa (skin) and succulent momo (chicken thigh) seasoned with nothing but a pinch of salt. Dinner for two, about 5,000 yen.

After dinner, soak up the smooth sounds and surroundings at Yamatoya, a longstanding jazz bar that reopened in 2013 after a yearlong renovation. No detail here is overlooked, from the classy décor — antique tables, glossy red bar — to the hand-cut ice. Then there’s the music. Hearing a Django Reinhardt record played on the superb audio system — Garrard 401 turntable, vintage Vitavox Klipschorn speakers — is like seeing new colors for the first time. And if the rich, room-filling sound doesn’t bowl you over, the owner’s collection of over 5,000 records surely will. 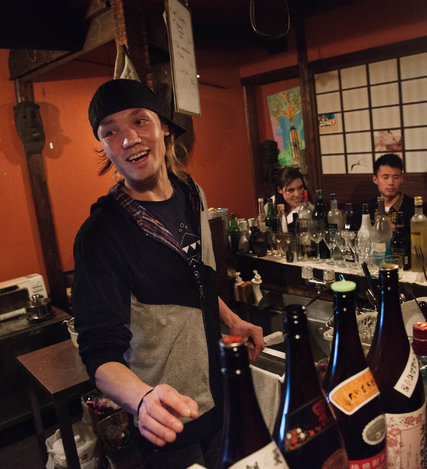 Spend the rest of the night hopping to increasingly discreet bars. Start at Cafe Gaea, a laid-back neighborhood hangout where you can while away an hour chatting with the affable manager, Rei. Then slip down the narrow path leading to the sliding door of Bar Bunkyu. The smiling bartender Nao befriends all who enter the austere space, where a few stools surround a large slab of textured wood that doubles as both bar and communal table. Close out the night at the nameless bar usually referred to as Kazu’s, after its owner. You’ll know you’ve arrived when you open an unmarked door on the third floor of a dingy back-alley building and step into darkness — only a few flickering candles illuminate the bottle-lined bar. A hypnotic soundtrack, underground atmosphere and 5 a.m. closing time make this an ideal last stop for those who can find it.

Temporarily transport yourself to an earlier era with a morning coffee at Rokuyousha, an old-school cafe with wood-paneled walls, vinyl seats, olive-hued tile and ceramic ashtrays atop every table. It’s easy to walk right past this relaxed bi-level coffee shop, but the many residents who stop in to read the newspaper, have a smoke and snack on homemade cake doughnuts know you shouldn’t.

Though many tour the temples that dot the Arashiyama district on the western edge of the city, few find their way to a fascinating site in the nearby foothills. At Otagi Nenbutsu-ji, a humble Buddhist temple with roots dating back to the eighth century, the hillsides are lined with over 1,000 moss-covered rakan statues (representing disciples of Buddha) whose origins are considerably more modern. In the 1980s and ‘90s, hundreds of people learned to stone-carve and donated the figures to support the temple’s reconstruction. The result was this wide-ranging collection of statues bearing entertaining expressions, from a tennis-racquet-wielding figure to a pair of jolly drinking buddies. Find and imitate your favorites. Admission, 300 yen. 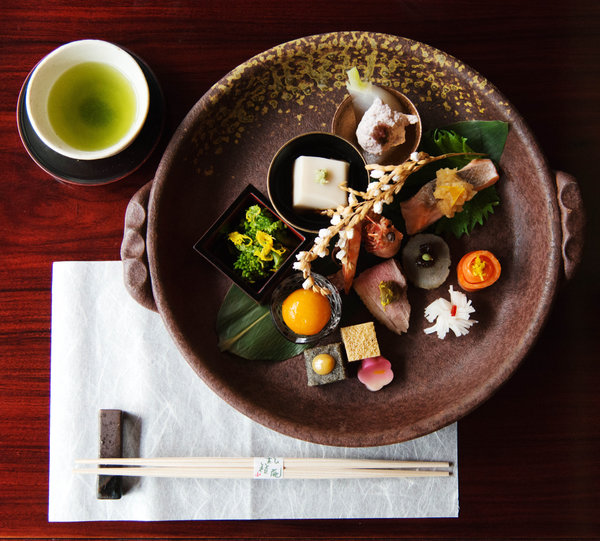 A dish at Syouraian. CreditKo Sasaki for The New York Times

Meditate on the subtlety of flavors during a meal at Syouraian, a restaurant in Arashiyama that showcases tofu, a Kyoto specialty, in various forms. Deep in the woods with views over the Oi River, the tranquil tatami mat dining room is a harmonious backdrop for the beautifully presented dishes, from a silken tofu appetizer adorned with a single dot of bean paste to fried agedashi tofu in broth topped with quivering shavings of dried bonito (4,600 yen for eight courses). After lunch, stroll through the nearby bamboo forest, where a path courses beneath the swaying stalks.

At Kyoto Design House, a refined shop occupying the ground floor of a spacious Tadao Ando-designed building, browse antique hair combs perhaps worn by long-gone geisha, black lacquered iPhone cases adorned with gold foil, and business-card holders made from Nishijin fabrics. More contemporary artisan crafts are for sale at Kohchosai Kosuga, a nearby shop filled with bamboo designs that will ignite a desire to outfit your entire kitchen with everything from elegantly simple serving plates and rice scoops to beautiful woven baskets and trays. 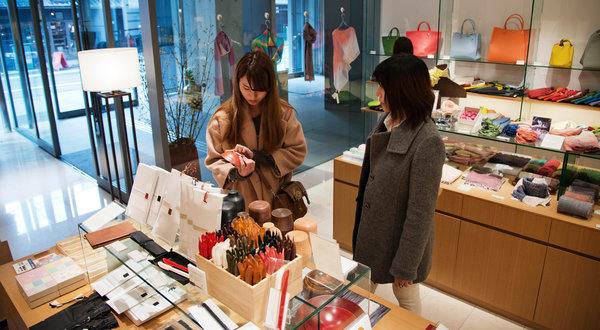 Kushiage, the cooking style of deep-frying food on skewers, is an art form at Kushi Tanaka, a cozy restaurant on a dead-end lane. The chef’s 30-plus years of experience are evident as he plucks skewers out of the fryer and presents them to the dozen or so diners squeezed around the wooden U-shaped counter. A recent 20-piece feast included bites of deep-fried mochi, mackerel, shiitake, kabocha, tender ginkgo nuts and an oozy quail egg wrapped in bacon. The set menu takes the guesswork out of ordering and costs 3,800 yen per person.

Though craft beer is slowly gaining a foothold in Japan, it’s still a relative rarity in Kyoto. To taste some ji-biru, or domestic microbrews, walk a few blocks west to Bungalow, a 10-tap craft beer bar that opened in 2012. There’s comfortable seating upstairs, but service is better at the streetside standing bar. A wider selection is found at Wachi, a fourth-floor izakaya that recently had Iwate Kura Oyster Stout on tap and a fridge stocked with bottles from Kiuchi Brewery, Baird Brewing Company, and other Japanese craft breweries.

Get up early for a peaceful trek to the top of Mount Inari on trails that snake through thousands of vermilion torii, the traditional gates that usually mark the entrance to Shinto shrines. Starting from Fushimi Inari Taisha, a shrine at the base of the mountain dedicated to the Shinto kami (spirit) of rice and prosperity, ascend the path passing under torii spaced so closely together that it sometimes feels like walking through a tunnel. To scale the summit and return down the winding wooded trails, allow two to three hours.

Head southwest of Kyoto to pay homage to the Suntory Yamazaki Distillery, the birthplace of Japanese whiskey. Free hourlong tours explain the distillation process, from malting to mashing to fermentation, and culminate with a sampling of Yamazaki single-malt whiskey with soda. (Reservations required; English audio guides are provided.) Afterward, browse the bottles that line the shelves of the on-site “whiskey library” and visit the tasting counter, which pours samples of top-notch blends and single malts, as well as limited-edition whiskeys available only at the distillery. 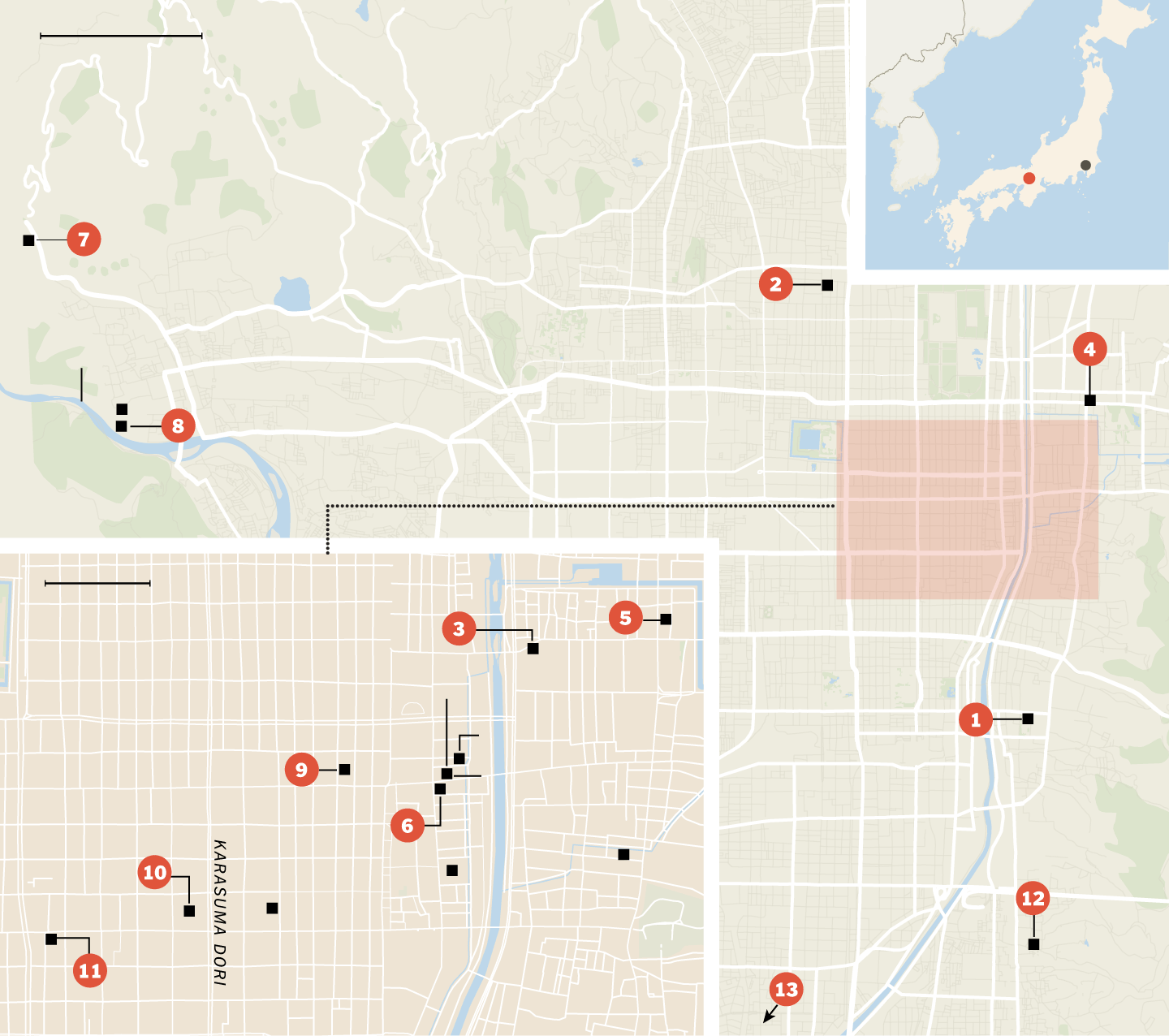