Moose in the City 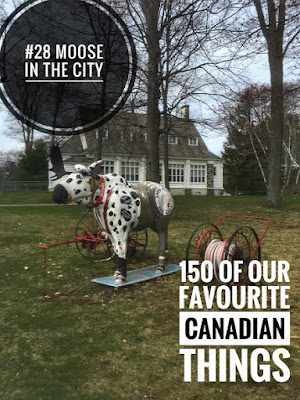 Moose in the City was a Millennium project by the City of Toronto in which 326 life-sized moose sculptures were placed throughout the city and decorated by local artists. The idea of placing the moose around the city came from McDonald's Canada founder George Cohon, he had the idea after seeing a similar project with Chicago's "Cows on Parade".

After numerous bouts of Vandalism and stolen antlers, a local anti-vandalism moose team was formed, almost a Crime Stoppers for moose vandalism. Eventually corporations started selling their moose to the highest bidder or they moved the moose away from the city to avoid the vandalism and only a small amount of moose still remain in the city and you never know where you might spot one on your travels.

What is 150 of our favourite Canadian things? Read about it here

Video Clip of The Week: The Cuckoos, “Heartbreak Paradise”

How To Get State Farm Car Insurance Quote | www.statefarm.com/insurance/auto

14 mind tricks to help you save more and spend less

Moose in the City