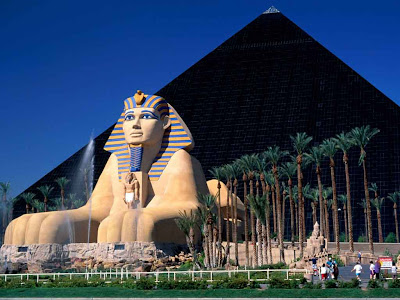 The Statue of Liberty and White House, Disney World and Hollywood, Broadway and Wall Street – these images come to mind when thinking of the United States. The third largest country in the world has many amazing cities and plenty of natural attractions to put on must-see list. And this list could stretch on forever. There are a huge number of unique fabulous cities in America that absolutely worth a trip, but just don't get their fair share of the limelight. Have you ever been to Bar Harbor Maine or Savannah Georgia or Portland Oregon? If the answer is No, then you should! But if I have to choose top ten must-visit cities in America, I have to stay with the usual suspects. After all, you haven’t been to America if you haven’t seen cultural icons like the Statue of Liberty and Golden Gate Bridge, or natural features like Grand Canyon and Lake Tahoe. So, here you are 10 Must Visit Cities in the United States.

Las Vegas
A paradise for gamblers and yes you have o try your luck here
A gambleville with luxury resorts and five star hotels, outstanding dining and acclaimed shows, exclusive spas and world-class golf courses – you have to party in Vegas at least once in a lifetime. Las Vegas’ proximity to unique treasures of nature such as Red Rock and Grand Canyon, Colorado River and Death Valley makes Sin City attractive travel destination not only for party goers but for nature lovers as well. Take a road trip to Death Valley National Park, just a couple of hours away from Vegas, and enjoy the hottest place in the country. Or drive a little bit further to Grand Canyon, the most famous natural feature not only in the area but in the USA. Or visit Lake Mead, a large man-made lake, one of the largest in the world. And you will see that there are more of Vegas than just parties.

New York
I think everybody would agree that New York is one of the most fascinating cities not only in the USA but in the entire world. Therefore it HAS to be on must-see in America list. What makes it so fascinating? First, of course, its architecture – Manhattan skyline is absolutely incredible. Second, its multicultural personality – New York is a true melting pot of ethnicities and cultures. And finally, nowhere else in a world you would find that many best restaurant, best hotels, museums and theaters concentrated in such a small land area of 23 square miles - that’s how small Manhattan is. And whatever your passion in culture, entertainment or food is, you’ll find it here. Don’t forget that besides Manhattan, there are four other boroughs in New York with plenty of things to do and to see.
Well, if New York has everything, then maybe the must-visit cities in America list should has only one city – New York? Not quite right. There are much more in this incredible country than just New York.

Boston
While New York is defined by its skyline, Boston is distinguished by its vibrant neighborhoods. From the fashionable Back Bay to oldest Beacon Hill to colorful Chinatown to historic North End – all neighborhoods of Boston has its own personality and distinct appeal. A stroll around this old city is like reading an American history textbook. Follow the red line marking the Freedom Trail and come across Boston Common, the Old North Church, Paul Revere's house and Bunker Hill. Each stop represents a chapter in American history. Being cultural and commercial hub of New England, Boston absorbed all best from the region, including best food such as Maine lobster and New England clam chowder. Try them when in Boston, they are best you can find in all country


Washington DC
The city is particularly glorious in spring, when its many gardens and park are in bloom. While visiting the White House, take the White House Garden tour and view the Jacqueline Kennedy Garden and Rose Garden – they are absolutely splendid. Sightseeing in Washington DC wouldn’t cost much – most of Washington DC museums and memorials are free. Take a ride to the top of the Washington Monument to see spectacular views of the city and surroundings. Stroll cobblestone streets of Georgetown, the city’s most beautiful neighborhood with great restaurants, bars, nightclubs, and shops. Relax at Dumbarton Oaks gardens, one of the loveliest spots in the city. And if you have time, explore surroundings - Maryland has plenty of things to offer to a curious traveler. Of course, to try Maryland Blue Crab is a must, when you are there!


Miami
America’s Riviera with 10 miles of wide white sandy beaches, delightful art deco architecture, trendy hotels, chic restaurants and hot party scene – this is Miami. Plus, a huge Latin American cultural inheritance – in some Miami neighborhoods you could easily forget that you are in the United States. If you don’t have a chance to go to Cuba, a short trip to Little Havana in Miami could give you a little glimpse of the Caribbean jewel: aroma of Cuban coffee and cigars, pulsating Cuban music, art and craft, very authentic restaurants and colorful storefronts. But, if you are really adventurous, rent a car and go to Key West for a couple of days. Not only because Key West is absolute paradise, but also because the road from Miami to Key West is really stunning.

Orlando
Orlando being home to the largest amusement park in the world has to be on a list of must-visit in America. Walt Disney World is the most visited recreational resort in the world, and don’t be mistaken it is not only for children, adults have plenty of fun in Disney World as well. Besides famous Walt Disney World Resort, Universal Orlando Resort, and SeaWorld, Orlando offers plenty of different entertainment, great dining and even museums – the most comprehensive collection of Tiffany art is in Charles Hosmer Morse Museum in Orlando

San Diego
Blue skies and 70 miles of great beaches, Mediterranean climate and Mexican specialties, aquatic parks, aquariums and zoos – the jewel of South California have it all. For beach lovers a visit to La Jolla is a must. The most magnificent beach on the West Coast offers fantastic surfing, excellent snorkeling and diving, amazing sunsets and beautiful sands. San Diego Old Town, the historical heart of the city, is the "birthplace" of California - San Diego is the site of the first permanent Spanish settlement in California. The Spanish and Mexican heritage of the city is celebrated throughout Old Town, including best Mexican food and Margaritas.

Los Angeles
Hollywood and Beverly Hills, Malibu and Sunset Boulevard – these places have to be on must-visit in America list, and all of them are in Los Angeles. Who wouldn’t like to take a ride down Sunset Boulevard in a convertible or watch sunset on Malibu beach with a glass of California Pinot? If you’ve never done it, you should! Besides famous attractions and intensive nightlife, Los Angeles has great surroundings to explore. Just take a road trip to Santa Barbara and you’ll witness a breathtaking beauty of South California.


Seattle
If you think that Seattle is only about rain, you are absolutely wrong. The Emerald City is a real green gem, with a wealth of evergreen trees throughout, and breathtaking views of the Cascade mountains to the east and the Olympic mountains to the west. Mt. Rainier looks down on Seattle from its majestic heights. Driving through Seattle on a clear day has been compared to floating on a cloud in an emerald sky. Go to the top of the Space Needle and enjoy a panoramic view of the city, have a lunch at a sidewalk café in Pike Street Market and embrace best of what Seattle can offer – splendid views and great freshest seafood.

San Francisco
The city's famous steep hills and trolley cars, astonishing bay views, the iconic Golden Gate Bridge, lively Fisherman's Wharf and Chinatown, numerous beautiful gardens and delicious food make San Francisco very unique and, from my point of view, the most beautiful city in America. When in San Francisco, take a trip to Napa Valley for a glass of wine or two while enjoying breathtaking scenery of a wine country. Or go to Lake Tahoe, to see “the jewel of the Sierras”, one of the most beautiful lakes in the country.

USAgente: Fanático Americano
What does jackfruit taste like - love…
Christmas gift ideas for 2021
The “Money in Politics” Debate and Ef…
Barracuda beach Lagos: Fun things to …