Tags: south supported american manifest destiny south north america settlers mexico
December 15th 2015
View original
When life gives you land, you go and take more land. - Idea of Manifest Destiny
John O'Sullivan, from the New York Democratic Review, argued in his essay Annexation in 1845: "And that claim is by the right of our manifest destiny to overspread and to possess the whole of the continent which Providence has given us for the development of the great experiment of liberty and federated self-government entrusted to us."

And boy did these millions multiply. The average fertility rate around this century was 5.2 - that means that each woman had around five children. In early America, the doubling time was 25 years. That means it literally only took 25 years for the whole population to double.

Manifest Destiny was a belief that the U.S. would one day spread from the Atlantic Ocean to the Pacific Ocean. The first person to use this phrase was John O'Sullivan, a prominent Democratic journalist.

However, American expansion to the west started way before 1845, when John first published his essay. In fact, it started as soon as the first English settlers landed at Jamestown. Originally, the Eastern seaboard states were confined to merely the coast. As the towns and cities became tightly packed, settlers began moving west - until the Proclamation of 1763, forbidding settlers to cross the Proclamation Line of 1763, a big cause of the Revolutionary War. 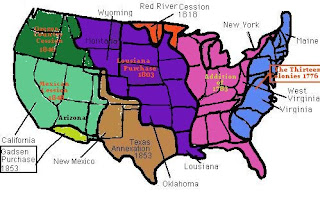 In the Treaty of Paris on September 3, 1783, the nation gained lands up to the Mississippi River.

President Thomas Jefferson bought all of French territories on mainland North America in the Louisiana Purchase. In the year of 1803, massive swathes of land were opened up to American settlement. The Adam-Onis Treaty saw America buying Florida from Spain in 1819, sixteen years later.

James Polk had been elected President in 1845 with a mandate of "Fifty four-forty or fight!" This was a clear reference to taking most of Oregon Country, which was eventually split between Britain and America on the 49th Parallel (surprisingly also the former boundary between North and South Korea until the Korean War).

Polk, in addition to his annexation of present-day Idaho, Oregon, and Washington, also annexed Texas into the United States on 1845. Based on a border conflict between the American state of Texas and Mexico, the two nations found themselves at war. After American General Winfield Scott captured Mexico City, California, Nevada, Utah, along with most of Arizona and parts of New Mexico, Wyoming, and Colorado all became territories of the United States.

The introduction of all this new land caused great conflict between the north and the south, however. The south supported the conquest of more territories to allow for more slave states and ensure the survival of slavery. The north opposed it for the reason that the south supported expansion.