Tags: garden
January 1st 2016
View original
What place on Earth could be so beautiful, pretty, serene, and peaceful that it's name is the origin of the word Paradise? The Ancient Greeks certainly thought that the beautiful Persian gardens were a paradise, since they labeled the gardens as paradeisos and paradeisoi.

The word paradise comes from the Old Iranian word for exceptional gardens, pairi-daeza, which in later years was shortened to parideiza and then to paridiz. Pairi means all around, thoroughly and ultimate, while the precise meaning of daeza is uncertain. However, as a compound word, pairidaeza came to mean a celestial garden, a heavenly paradise on earth.

No matter where you've from, you've probably seen many artful gardens. It's important to remember that most gardens originated from Persia - especially the famous ones.

Take the famed Taj Mahal in Agra, India for example. It was built by the Mughal Dynasty, descendants of Timur the Lame. Timur himself hailed from modern-day Uzbekistan, though he conquered Persia. After his death, the Timurid empire collapsed, with Timur's generals and Timur's sons fighting for his inheritance.

Eventually, a man named Babur led his armies away from Persia. His armies swept south into India, forming the Mughal Empire. The now unkempt Aram Bāgh garden in Agra was the first of many Persian gardens he created.

One of his descendants, Shah Jahan, followed in his footsteps. Shah Jahan constructed the Taj Mahal (also in Agra) as a tomb for his beloved wife, Mumtaz Mahal. It took great effort, as Wikipedia explains:

Construction of the mausoleum was essentially completed in 1643 but work continued on other phases of the project for an additional ten years. The Taj Mahal complex is believed to have been completed in its entirety in 1653 at a cost...which in 2015 would be valued at around 52.8 billion Indian rupees ($827 million US). The construction project employed around 20,000 artisans under the guidance of a board of architects led by Ustad Ahmad Lahauri.

The Hanging Gardens of Babylon 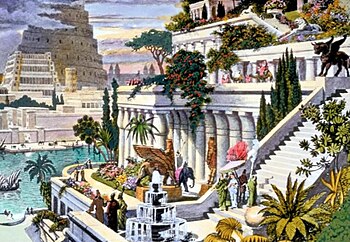 You've probably heard of the Hanging Gardens of Babylon somewhere. After all, it's one of the Seven Wonders of the Ancient World - and the only one whose location is still unknown.

According to one legend, Nebuchadnezzar II built the Hanging Gardens for his Median wife, Queen Amytis, because she missed the green hills and valleys of her homeland. He also built a grand palace that came to be known as 'The Marvel of the Mankind'.

Unfortunately, the Hanging Gardens might only be mythical. If they existed, they were destroyed after the first century AD. How does this relate back to Persian gardens?

The Heritage Institute says that:

The Hanging Gardens of Babylon...were built based on the Median (western Iranian) gardens in the Zagros mountains.

Other than the fact that some of us humans do enjoy art, we have to understand the context of the gardens in order to know their significance. This is a pretty valid question. Why did the Persians decide to build humongous gardens when they lived in a pretty dry place?

Outdoor Sofa vs. Outdoor Sectional – …
30 Cheap & High ROI Home Renovations …
Robotime Rolife Nanci Secret Garden S…
Fiction Series So Big, They Cross Mul…
California’s 15 Best Hotels with Free…
The Heritage Institute says that the Persians decided to build humongous gardens that sucked up a bunch of water because they lived in a pretty dry place. Talk about a waste of natural resources, eh?

To understand the true significance of the Persian gardens, the baghs, both informal and formal, it is necessary to put them in the context of the surrounding countryside of Iran and Central Asia - lands given to extremes in climate, from severe winters with blizzards, to burning summers with blinding dust storms. The mountains are for the main part barren and rocky, and the ever present deserts are covered with dust or a yellow slime where the water does not drain away. Within the desolation are verdant valleys and hidden forests.

Elsewhere, the land can be dangerous and hostile to the unprepared visitor. The Aryans, however, saw an inner latent beauty - like that of a gem encased in rock. They left the countryside for the main part pristine, admiring it for what it was, as nature intended, and sacred as God's creation. Where land was required for human habitation, rather than scaring the earth, they helped make it blossom, a refuge not just for themselves, but for animals and rare plants as well. That was the ancient ethic.

Now we're on the part that you guys probably came here for. What were the gardens like? Were they really that paradisaical? Were they pretty? Beautiful? Serene? Peaceful? Nice?
Most Persian gardens relied on the chahar bagh. The Heritage Institute explains just what this 'chahar bagh' is - it's a garden that consists of four squares within a square (square-ception?)

The style or Persian gardens can be both formal and informal. The formal gardens are the type found in front of palaces, and are geometric in their layout. Cyrus' garden, the chahar bagh (see below, also spelt chahr bagh), meaning four gardens, consisted of four squares within a square - a quadripartite ground-plan. In addition to the various formal gardens in Iran, the gardens of the Taj Mahal in India are also an example of a formal garden. A example of informal gardens are the family baghs found on the outskirts of major Iranian cities such as Tehran.

And in case you're questioning how paradisaical the Persian gardens really were. In the case, here's one fun fact:
There's some food for thought, eh?