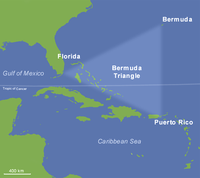 The Bermuda Triangle is an undefined region. Its general area is between Bermuda (United Kingdom), Florida (USA), and Puerto Rico (USA). It is famous for being an area where a high number of ships and planes have disappeared.

The first believed disappearance in the Bermuda Triangle was on September 17, 1950.

An outspoken critic of the Bermuda Triangle, Lawrence David Kusche, stated several points:
According to the United States Navy, the triangle does not exist. The name is not recognized by the US Board on Geographical Names.

It is also unlikely that there are magical creatures (from Rick Riordan's Sea of Monsters and multiple other books) living there. The area is one of the most heavily traveled shipping lanes in the world, with ships crossing through it daily for ports in the Americas, Europe, and the Caribbean Islands. Cruise ships are also plentiful, and pleasure craft regularly go back and forth between Florida and the islands. It is also a heavily flown route for commercial and private aircraft heading towards Florida, the Caribbean, and South America from points north. If there were so many ships in this area, it would be more likely that it is just that the number is proportional to the rest of the world, but since there are larger number of ships, the number is large. 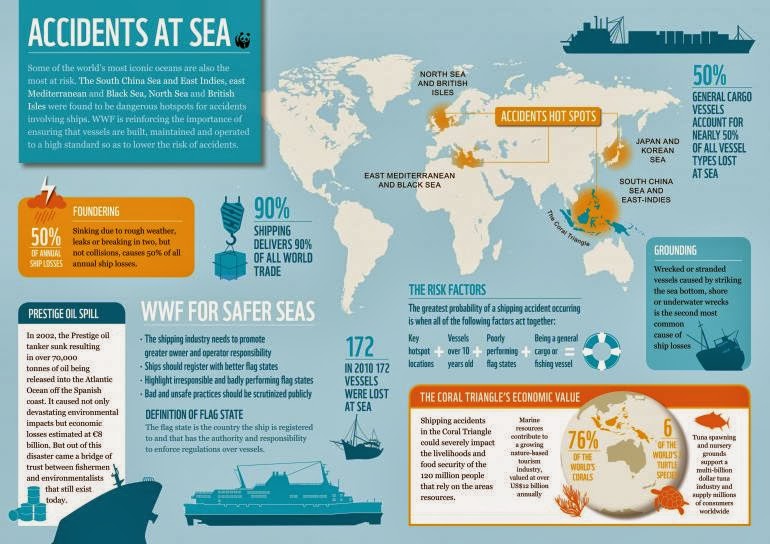 Furthermore, the World Wildlife Fund for World Oceans does not recognize the Bermuda triangle as true. Their infographic below shows that the majority of sea accidents are around Denmark and the United Kingdom, Turkey, Egypt, Greece, Libya, Albania, and South Italy, Japan and Korea, and Brunei and the Philippines.


This is a recorded simulation of a rogue waves. Rogue waves are sudden, large waves that occur far out at sea. This is believed to be one of many factors in the "myth" of the Bermuda Triangle.