Tags: qin shi huangdi china qin shi shi huangdi han fei
September 27th 2015
View original
Just yesterday, we learned about Confucianism, Daoism, and Legalism (and Mohism). As a background for most of the history of China, it's crucial to understand both the ideas and the philosophers themselves that propagated these ideas - namely Confucius, Laozi, and Han Fei. On September 18, we began learning about the empires of China themselves - the first two, the Qin and Han.


This is part of the 180 Days of History series, by the way. If you'd like, you could sign up for weekly email updates explaining what we've learned this week. I promise I don't spam!

The Qin dynasty was central to the creation of 'China'. It's possible that this name was derived from Qin, but archaeological evidence and many historians agree that 'China' comes from the Sanskrit word 'Cina'. 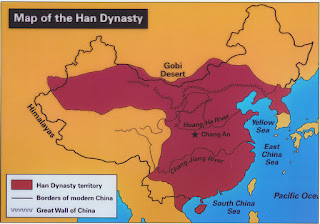 Regardless, the Qin were one of the 'new forces' that would change China forever. Sinitic (Chinese) peoples had finally colonized the west. Meanwhile, the southern 'Yangtze' Chu state was an early sign of the Sinification of the south.
The later Qin were Legalist, with Qin Shi Huangdi seeking to standardize everything, including written language, street size, standard system of weights and measures, coins, laws, and carriage wheel size. (pretty random). Remember, Han Fei lived at the same time as Qin Shi Huangdi (they were actually born in the same year), and Qin actually invited Han to come over (but imprisoned him later).


Qin's massive building projects - like the Great Wall of China (biggest graveyard in the world, by the way), which demolished previous walls separating the former kingdoms of China, and the massive construction of his future tomb all required massive labor. To do this (since who wants to work in a cold hell like Northern China in the winter), he forcefully conscripted peasants. Obviously, since peoples' sons and husbands and fathers were dying, nobody was exactly happy with the Qin.

In addition, the Qin were reported to burn scholars alive and bury them alive too. Pretty brutal, right? Recently, historical evidence argues that he burned scammers alive - like shamans who tricked money from bureaucrats.

Still, the Qin lasted for 14 years - only 14 years. Li Si, that evil chancellor I mentioned earlier, decided to betray Qin Shi Huangdi's chosen successor because they weren't friends (and he didn't want to lose his job), so the new emperor had no legitimacy. A rebellion by peasants overthrew the Qin, led by Xiang Yu and Liu Bang.

Liu Bang had a disagreement with Xiang Yu, so they had a bunch of battles. Liu Bang won and formed the Han Dynasty, which would go on to be big and famous.

In fact, it's the reason why Chinese characters are called Hanzi - go figure, right?