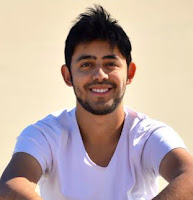 Travel Blogger : Traveller
(Sao Paolo, Brazil)
“ Travel ”
Adventurous Travels
While most travellers go to Paris, London or Thailand, our friend Flavio, who hails from Brazil and currently residing in Ireland, is trying to show the unpopular and unknown side of the world. No tourists, no con artists. A paradise just for oneself that will turn out much better.
Flavio knows that budget is important and it is one of the factors why he has no regrets in choosing Albania and the Balkans in his last journey. "To cut costs, I try to get various deals, cheap flights and local accommodation which is way better than hotels that are identical in every country. I also travel light, without any excess of luggage", he says.
There are many things about travel that we can learn from our featured traveller. His advice is for us to go out of our comfort zone and not believe in what is trendy. He further suggests to explore the world beyond the well-known tourists spots and see how rewarding to travel this way.
And why did he like Albania that much? Let's find out!
Join me as he tells us a brief story of Albania. Read on...
* * * * *
My travel story...
Albania - Hidden paradise in the middle of Europe.
Summer holidays in Europe? Spain, Italy, Greece and recently in Croatia. No one thinks about Albania although it is surrounded by these famous countries. Everyone seems to skip Albania. And the result is -- they lose the best! I decided to go there just because no one is travelling to such a beautiful country. I was warned about mafia, pollution, danger and my safety, among others.
And look what I found?

A Paradise. Tropical looking beaches with white sand -- which is quite unique for Europe, beautiful and charming towns with an architecture that you feel like you're in a fantasy film; extremely friendly locals, superb, fresh and authentic food and ridiculously low prices.


In Albania, it's like you are in a beach without anyone around -- world class beaches that still don't have hotels and ubiquitous concrete. If you're sick of tightly packed sun beds (to be rented for money, of course), go to Albania where you can admire the sea and not the back of another person blocking the view.

It is unfortunate that the infrastructure and hotel networks in Albania are stealing more of what nature is at its best. If this continues, and I guess it will, this paradise might be gone so soon, just like in Croatia and Montenegro which changed enormously over the years. Before anything else happens, I would recommend Albania to be your next destination. Be inspired as I share to you my impression of Albania through photos of this unspoilt paradise.


Albania is probably the only country in Europe where people are actually excited to see and meet foreigners. In a local pub (during the World Cup in Rio), when they found out I was from Brazil, I was given a Brazilian t-shirt, free beers - - only because a foreign tourist visited them.

People of Albania get excited about Southeast Asia. Little did they know that most of these countries are already losing the charm and authenticity due to the enormous number of tourists who come and visit. Albanians should not forget that their country is a hidden paradise waiting to be discovered.

Read more of Albania and other off-the-beaten-path destinations that I explore and share experiences with my travel and blogging companion, Tom. Join us with our adventurous travels and be inspired while we discover places that are still undiscovered.

From the desk of:

Where?
How Has Travel Loans Helped Open Up N…
The Marvel of Currency Trade and Litu…
Better Starts Now with Eco-Drive Worl…
Lizwi – Colors EP

The Marvel of Currency Trade and Liturgies in Pakistan