The Secrets and Treasures of Ilocandia | Ilocos Norte 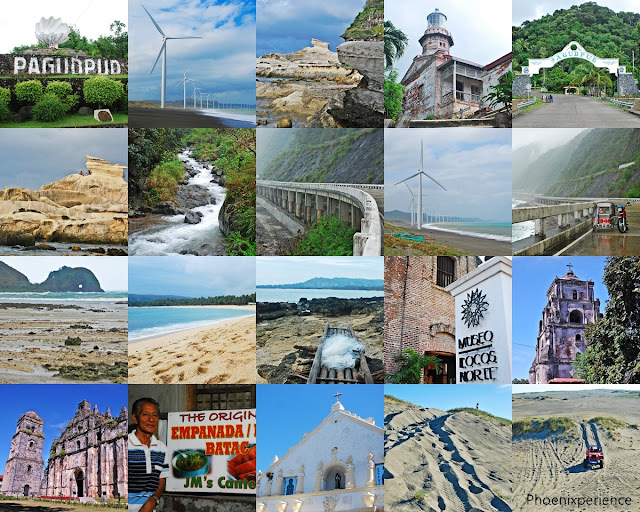 It would have been cool but I didn’t need a DeLorean with a functioning flux capacitor to go back and forth for this adventure. I stood there with Ilocos Norte as my gracious host allowing me to wander as far back to the bygones to embrace its history, to the present that I may be inspired by the moments that left much to be desired for my next northern exposure. Utterly fascinated by its old world charm, deep-rooted religion, age old traditions and weathered attractions its secrets and treasures were revealed in its heritage, history and hometowns. So set your compass to the North and head onto Ilocos Norte where the secrets and treasures of Ilocandia await.

PrettyLittleThing review: Experience …
“The Friend Who May Not Seem a Friend…
Globe’s tower builds on track; secure…
ALBUM: Sun-EL Musician – To The World…
Start From the Top – Pagudpud Baby! 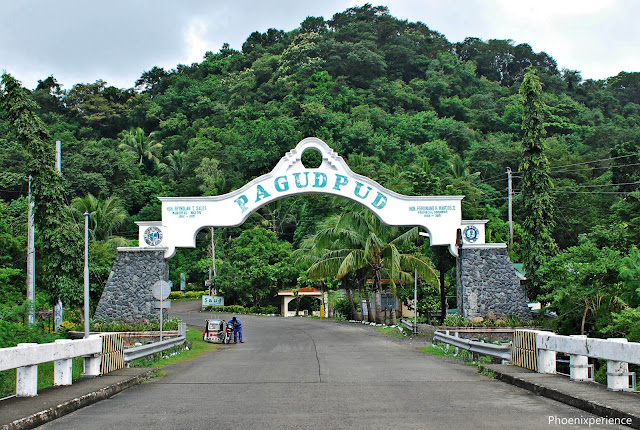 No sense to delay, Pagudpud was on top of my list and in the list of the top 10 beaches in the Philippines. It didn‟t disappoint with its saline beauty that stretched out to welcome visitors. If you are particular about the sands, it‟s not white and powdery but fair and fine enough to soak in the sun. 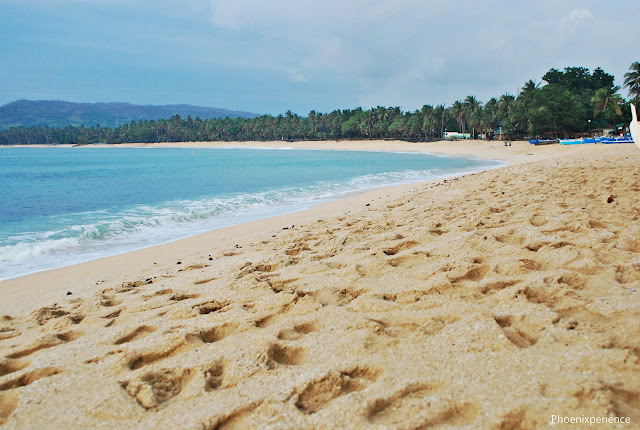 Sunny or overcast the water is clear and the color of emerald. You can choose to stay at Maira-ira or Blue Lagoon if you prefer a secluded appeal or opt for Saud for variety and a little more action, why not try both as they are easily accessible.
Magnificent Mentions
Windmills of Bangui 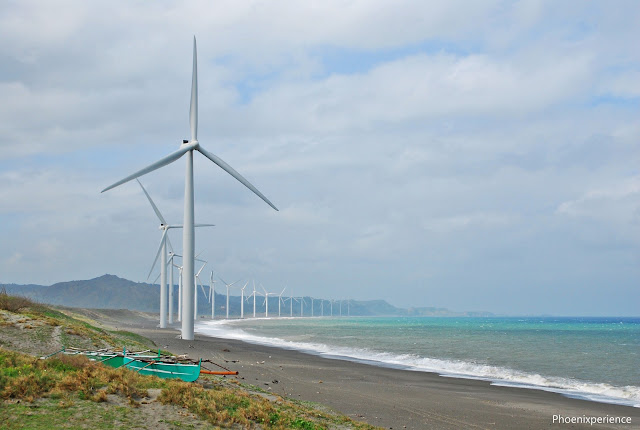 The launch of my northern exposure to Ilocos Norte was upon seeing the famed Bangui windmills. I kicked my shoes off, barefoot and carefree I ran and cart wheeled passed colossal windmills droning in unison with the sea that harbored the wayward winds. Bangui is the “Home of Green Energy” which secured a place on the International Map as the first commercial and pure (not hybrid) wind farm in the Philippines and the biggest in South East Asia.
There it was…my nemesis…Kapurpurawan Rock. 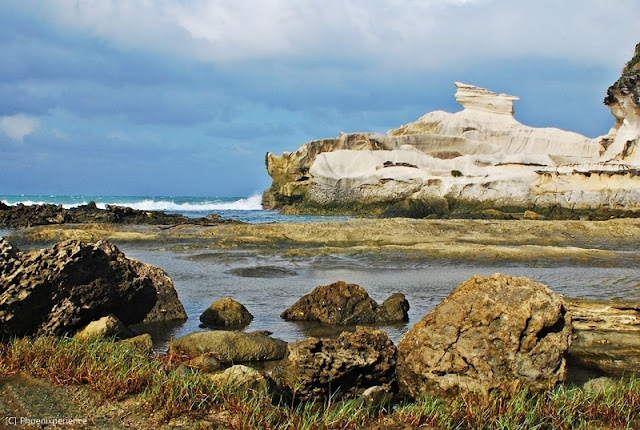 I often ponder the slightly strange spell-binding connections I have upon visiting a place prompting a certain kind of familiarity, a bizarre feeling of being once there before but haven‟t, a “just can‟t put my finger on it” type of feeling that peaks my curiosity. In my excitement I tend to be overzealous in my quests not minding the limitations of my powers. It appeared like the Sphinx, enigmatic and gargantuan. In my mind‟s eye, the rock and I were at a stand-off, sizing up one another but in reality my super powers submitted a hundred feet ago. 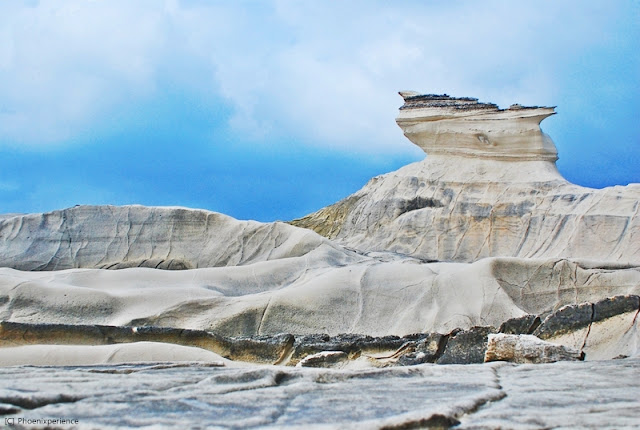 It was elusive as it can‟t be seen from the paths that led to its domain. It took an unbeaten path and minutes of trekking on mud, bushes, sharp uneven and slippery terrain to get to its base. It also takes much will, strength and wee madness to climb. Kapurpurawan though formidable showcased how rock and coral succumb to the powering winds and water. I of course submit to the fact I was at their mercy. Word of caution, if your step doesn‟t feel right…don‟t. Winds push and pull so stay close to the walls and take your time. The sweat, muscle pains, minor scratches and pelvic dislocation were worth it. I‟m an absolute sissy when it comes to heights but my curiosity took the best of me and to have reached the top was a victorious moment I celebrated with fist pumps and shouts of joy. 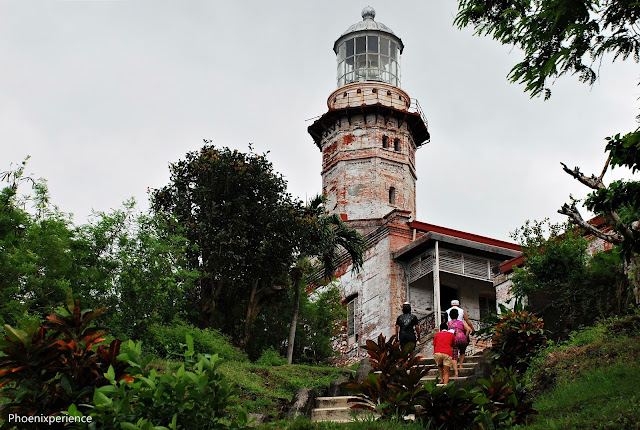 Standing strong for more than a century this historical landmark was established by Spain to illuminate this northern coastline, observe the incoming ships and guide the galleons that passed this route in that very busy trading era. Standing 65 ft. tall with an octagonal stone Tower it was first lit on March 30, 1892 and is set high on Vigia de Nagparitan Hill overlooking the scenic Cape Bojeador. Its brick walls and spiral staircase apparently tested by time gives it character as it sits on quiet reserve.
The Long and Winding Patapat Viaduct 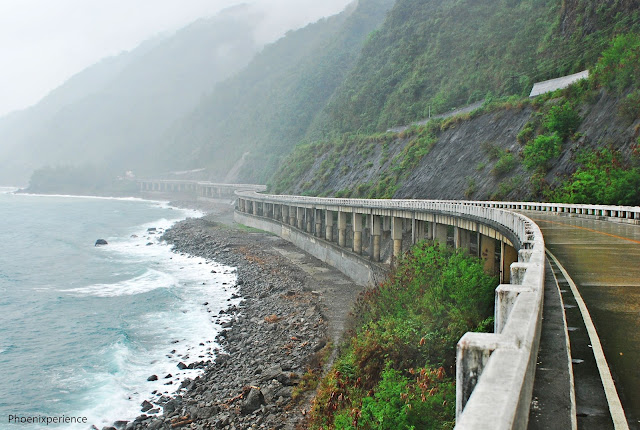 Snaking through Northern Luzon this 1.3 km concrete coastal bridge is the 4th longest bridge in the Philippines. The viaduct replaced the old one way road often blocked by erosions putting solution to landslide concerns and added another tourist attraction. Constructed on the shoulder of a mountain it gives a spectacular view of the lush mountains on one side and the vast blue on the other and the long winding Patapat highway in the middle.
The More the Merrier
If you have the luxury of time and want to explore beyond the beach scenery, there are tricycle tours in Pagudpud that could take you Northbound (Kaibigan Falls, Patapat Viaduct, Agua Grande, Paraiso ni Anton, Timmangtang Rock, Bantay Abot Cave, Dos Hermanos and Blue Lagoon) and Southbound (Pagudpud Landmark/ Arch, Bangui Windmills, Kapurpurawan, Cape Bojeador Lighthouse, Bojeador Bay) tours for P600-P800 (P44 .1$ rate around $13-$18).
Premiere City of Laoag
Gateway to the North, Laoag houses Ilocos region‟s only commercial airport. The city‟s trade and commerce is the fulcrum of development in the expanse. Also called the city of light or sunshine city, it was true to its name and everyday I spent there possessed a clear atmosphere with the bluest of skies. Laoag being center of it all have access to the regions best in and around. In and around city tours are very easy to come by, just hail a tricycle and negotiate for the best rate and you are all set.
Museo Ilocos Norte/Gameng(Ilocano word meaning repository for artifacts)
You would know of the pride a place has for its history, culture and heritage if they have a museum to show for it. Ilocos Norte has one and is very proud to share the gamut of treasures on display. The logo of the museum “the sinag” or rays of light was influenced by a many-rayed sun on one of the finials at the back of the 9th century Church of San Nicolas to show the varied ethnicity and multi-faceted cultures imbibed by its wonderful people.
St. Williams Cathedral and the Sinking Bell Tower
A chapel built of wood and thatch was built on this site in 1580 but it was in 1612 when the foundation for the cathedral was constructed in Italian renaissance design. Disaster prone… damaged by a hurricane in 1640, by an earthquake in 1706, and by fire in 1843, it still stands well kept. The Bell Tower was built nearly 2 centuries later, in 1783. The bell tower is located at walking distance around 85meters away from the church. Back then, the sinking bell tower was one of the tallest structures in the province allowing a person on horseback to pass through but as it continues to sink in its foundation every year a pint-sized me had to do a crouching tiger motion.
Sta.Monica Church
Built in 1779 in the town of Sarrat about 7 kilometers to the east of Laoag, this Church of baroque and neo-classic style is known for its distinct features. Distinctly Sta.Monica would be its red bricked façade that gave warmth and a seasoned feel, the unusual staircase connecting the church to its convent and its famous aisle that stretches the longest in Philippine record of 137meters.
Paoay Church (St. Augustine Church) 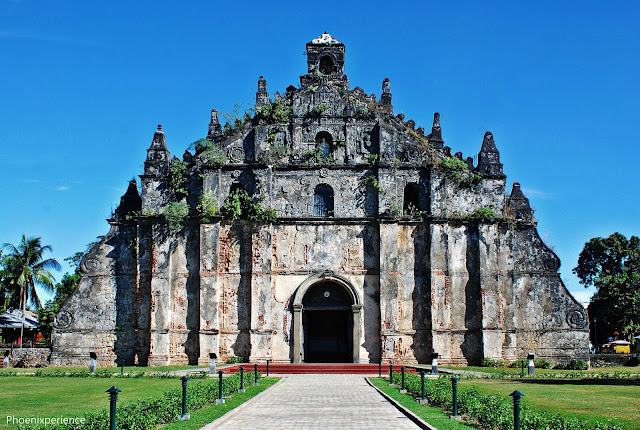 It's no wonder that Paoay Church is in the UNESCO World Heritage list and certainly a national treasure. There is nothing like Paoay Church. Its grand fascia would leave anyone speechless or the other way around completely thunderous with praise. There„s some confusion on when it was built and finished but according to the signage on its property I have got to go with 1593 but regardless of the when, this mighty structure held its own through time. Built of baked bricks, coral rocks (which can be seen upon close inspection), tree sap, and lumber. The best example of an earthquake Baroque architecture having 24 massive curved buttresses in support of 1.67meter thick walls.
Its coral stone bell tower stands 3-storeys high and a safe distance away from the church. Used as an observation post by the Katipuneros (Philippine revolutionary society founded by anti-Spanish Filipinos) during the Philippine Revolution against the Spaniards in 1896 and by Filipino guerillas during the Japanese occupation in World War II. I noticed how these churches were separated from its belfry and learned that it was typical and strategic then to have built bell towers separate from its churches to spare the church in case the tower collapses or at least minimize the damage especially during earthquakes. 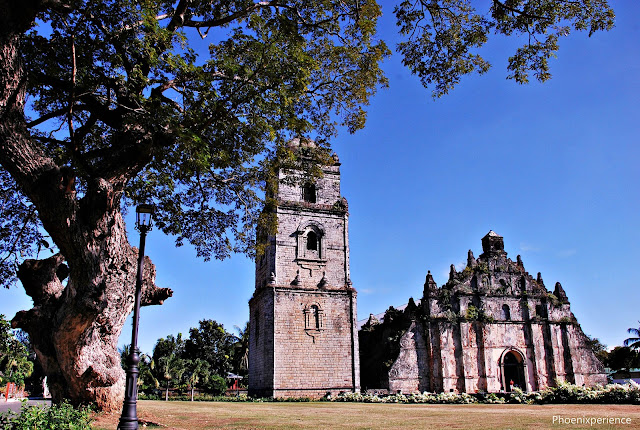 Historians also record the bell tower to have served as status symbol for the locals, how the bells would ring more loudly and more times at a wedding of a prominent clan than it would for those not so well to do. In my heart I laughed and cried with my imaginings.
The Sand Dunes (La Paz and Paoay)
Hollywood took notice of our unbelievably unique landscape and used it as setting for parts of Oliver Stone‟s “Fourth of July” top-billed by Tom Cruise, “Madmax” which starred Mel Gibson and local great favorite Fernando Poe‟s “Panday” (Blacksmith) and Nora Aunor‟s classic “Himala”(Miracle). The sand dunes of Ilocos simply was “out of
this world” awesome on and off camera. On one end the dessert stretching inland and on the other the pleasantly refreshing China Sea.
It stretches from the northern town of Currimao to La Paz in Laoag then Suba in Paoay all the way south to Pasuquin. La Paz and Suba sand dunes are the two most popular sites and already have a growing sand boarding community. It would be a mistake to go there without a hat or sunscreen and suicide to go without water. I should know, I lucked out but with one of my nine lives I returned burnt as toast and thirsty as a camel.
Other Gems
The other gems spread throughout Ilocos Norte are like the Tobacco Monopoly Monument, Malacañang of the North, Marcos Mausoleum, Paoay Lake, Juan Luna Shrine, etc. The trip would not be complete without tasting Ilocos Norte‟s delectable treats such as the Bagnet (deep fried and crispy pork), biscocho(toasted crackers), cornicks (crispy corn kernels), empanada (filled pastry) and longganisa(link sausages). The region is also proud of the Sukang Iluko (native vinegar), garlic, tobacco, basketry, bricks, pottery and loom weaving.
Perhaps it was the fast-changing world with its complicated technologies taking stride over our modern lives that I found it more novel to visit the old world charm of Ilocos Norte. I came and embraced its history, heritage and culture. I saw and was inspired for my next quest and conquered by taking home its secrets and treasures locked in memory. The secrets and treasures of Ilocos Norte are far too many to mention and it is left to you to find out the others and while you are at it…Live, love with no regrets!

The Secrets and Treasures of Ilocandia | Ilocos Norte