After doing quite a bit of research in trying to decide which cruise line to take, and what time of year to take our Trip, we chose to go with Holland America in early June. We liked Holland America because it visited both Glacier Bay and Tracy Arm, and if I remember correctly, was the only cruise line to do so. Some of the other lines visit Icy Straight, Mendenhall Glacier or Sitka as part of their itinerary. We chose to sail in early June because it tends to have some of the best weather in terms of the least amount of rain. Although the forecast looked rather bleak for almost every day of our trip, we saw very little rain during our one-week cruise. Early June is also a good time if you're looking to avoid mosquitoes, which can be bothersome according to some of the reports I read. Our timing worked out perfectly. The only time mosquitoes gave us any problems was while we were standing on the dock in Skagway, other than that, they were a complete non-issue. 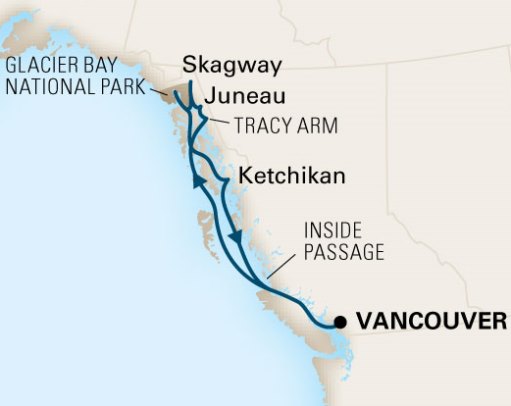 As a result of our choice we ended up sailing out of Vancouver, British Columbia on the ms Nieuw Amsterdam, a relatively new ship which took its maiden voyage on July 4, 2010. The ship is 935 feet in length, has 11 passenger decks that can accommodate up to 2,106 passengers, has a crew of 929, and has a maximum speed of 23.9 knots (27.5 mph). 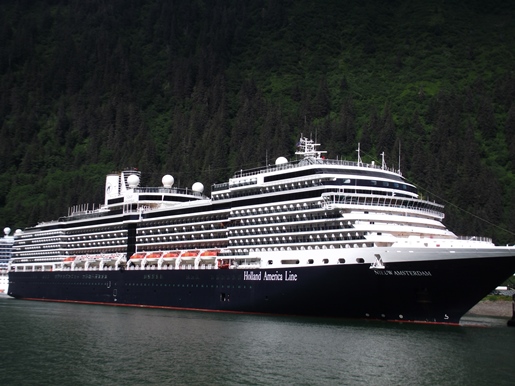 The start of our cruise experience did not go smoothly. We both felt lost after walking into the terminal building at the Vancouver dock. It was chaotic, unorganized, and there was very little signage to explain where to go or what to do. Once we had all of our documents in order, and the process of boarding the ship began, we felt like cattle being herded to the slaughterhouse. The whole process reminded me of the Soup Nazi episode on Seinfeld.

A couple of hours after boarding, all passengers had to take part in a mandatory evacuation drill before we could set sail. Once this was completed, things became more normal and we began settling into our ship-life groove. I didn’t even realize we were moving until I walked to the back deck and saw the wake trailing behind the boat. As we cruised between the mainland and Vancouver Island (which is 290 miles in length) that first day, sailing was really smooth. However, on the second day, we sailed through open seas for several hours before reaching the Inside Passage. To make matters worse, a rain system with fairly high winds passed over us during this portion of the trip. According to the cruise log the wind was clocked at 33 knots, or 38 MPH, resulting in some relatively rough seas. Though nothing horrible, both Kathy and I did feet a little woozy, especially when we went into the confines of our tiny bathroom. To help remedy the situation we tried to spend as much time as possible outside where the fresh air - though damp and cold - seemed to do the trick.

For the most part, the first two days were fairly uneventful. Other than a few whale and porpoise sightings, and some far off mountains, we really didn’t see much.

That all changed once we reached the meat of our trip. Over the next three days we enjoyed outstanding weather and scenery.

One of the legendary tales about cruising is the quantity of great food passengers have access to from morning through night. For the most part I thought the food on our boat was pretty good, with a few items I would describe as being exceptional. I thought Holland America did a very good job with their beef dishes. Their cream of broccoli, French onion and wild mushroom soups were all outstanding as well. I also enjoyed the chance to sample foods I don’t normally have access to, such as the offerings from Indonesia, the homeland of many of the crew members.

The downside to the dining experience was dealing with the constant crowds, especially during breakfast and lunch at the Lido Restaurant, where the food is served buffet style. It was hard to have a relaxing experience, not to mention the difficulty in finding an open table to sit at. For dinner we chose to dine in the main dining room, which is a sit-down, full service experience. 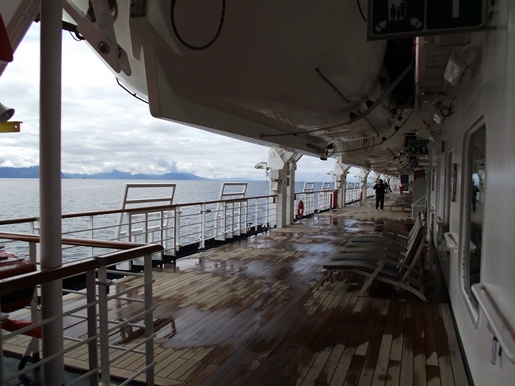 I should also mention that the entire staff – room service, waiters and business personnel – were all extremely friendly and professional.

On-board entertainment was pretty good as well. On nights when it was too cold or wet to sit outside, we watched B.B. King's All-Stars at the B.B. King's Blues Club. I was really looking forward to hearing some good blues, but discovered the band played mostly Motown. Oh well. The band was still very talented; especially the female vocalist who I thought could be a national talent. We also went to the piano bar one night, which I thought was a lot of fun. Since the pianist mentioned that he liked Elton John, I jokingly requested Funeral for a Friend, which I was sure he would scoff at. Not only did he know the song, and not only did he play it, but he did one whale of a job on it – I was thoroughly impressed! 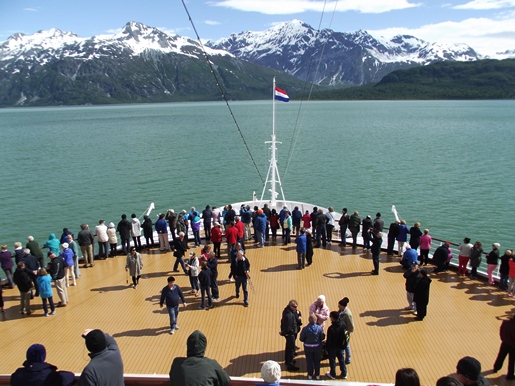 All in all we had a great experience, and are certainly glad we took the cruise, but have no intention of ever doing another one. As I said, were not really “cruise people”.

Over the next several days I will be posting photos and reports from our excursions into Tracy Arm, Glacier Bay National Park, Misty Fjords National Monument, as well as our hike through Denver Valley just north of Skagway. Below are a few more random photos from our cruise.

Float plane takes off from the Juneau airport at sunset: 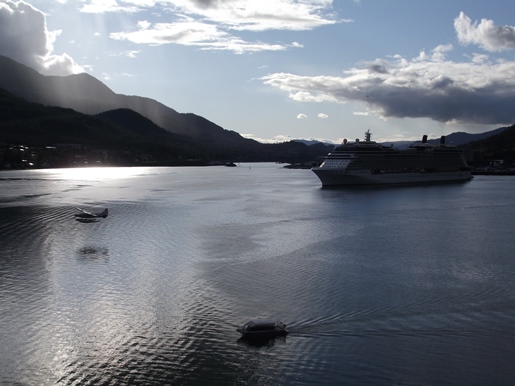 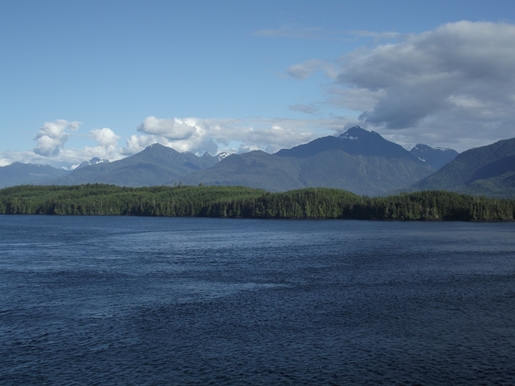 On Day 5 after visiting Glacier Bay, instead of sailing through Icy Straight, we instead hung a right and sailed past the Brady Icefield and Brady Glacier, with the Fairweather Mountains in the background: 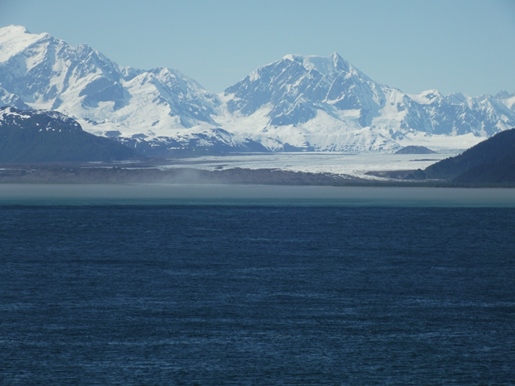 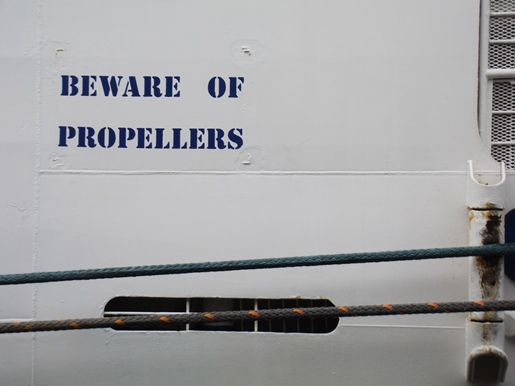 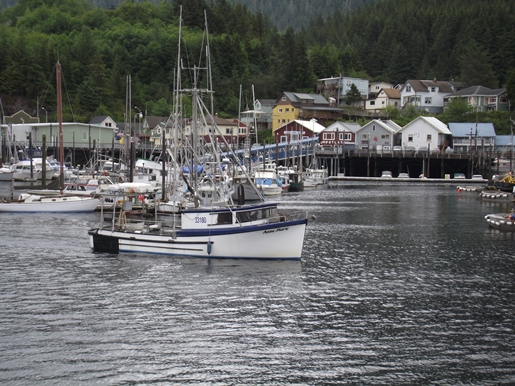 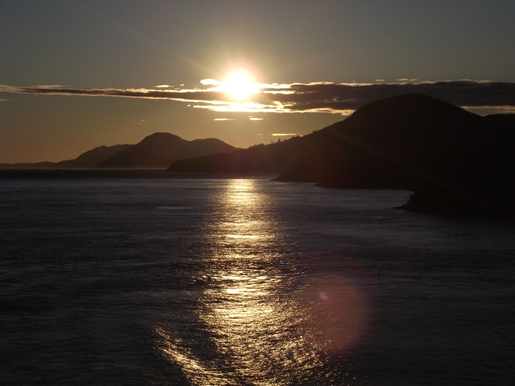 For a detailed tour of the boat you can watch this short video:

Lonely Planet Alaska is your passport to the most relevant, up-to-date advice on what to see and skip, and what hidden discoveries await you in Alaska. This guide includes full-color maps and images, highlights and itineraries to help you tailor your trip to your personal needs and interests, as well as insider tips, cultural insights, reviews for all budgets, and essential info at your fingertips, such as hours of operation, phone numbers, websites, transit tips and prices.